Often times, you could find yourself needing to use both tools but for simpler builds, the SDK Cloud debugger should suffice and will be the focus of this guide today. To learn more about the SDK CLI, head over to our CLI reference!

You can find the cloud debugger in the bottom section of the SDK console below the code editor.

As you make code changes to your connector, our debugger helps you debug the most recent code changes. To ensure that we are always working off your latest version, we save your code if there are unsaved changes.

Save quickly with Hotkeys

Use cmd + s to save the latest version of your connector.

All connector builds start with building and debugging your connection. Without this, actions and triggers would not be able to be tested. To test your connections, head over to our connection tab in the debugger.

All fields defined in your fields attribute of the connection hash should show up upon saving. 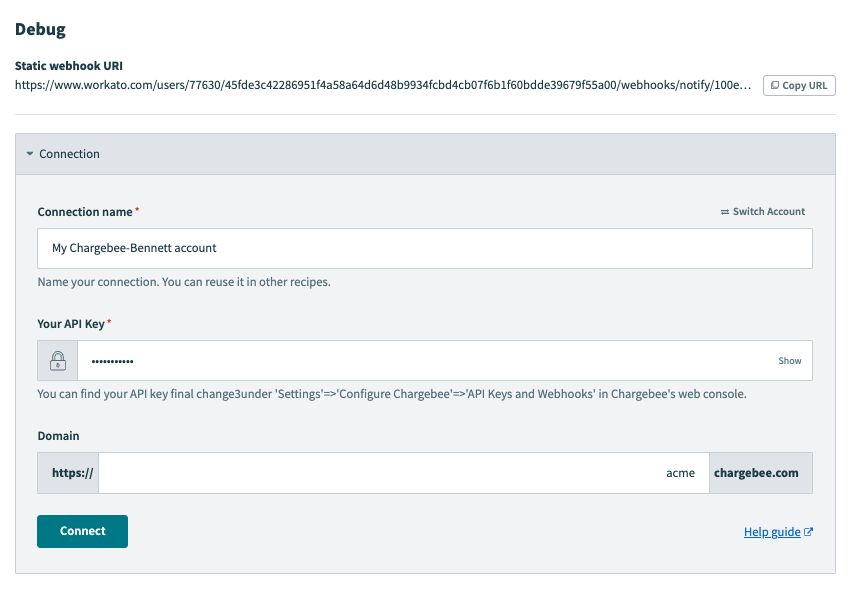 When you test your connection (by hitting Connect), it will show you if the connection was successful. Additionally, it will display logs for the connection attempt. This includes the input parameters that you have passed to the connection, the output, any error messages, console logs, and HTTP requests.

In the example above, this is triggered from a puts statement in our apply block.

In the example above, this debug trace is generated from the request we send in the test block.

For the UI of the operation, clicking on the action or trigger will display a stub in the recipe editor. This allows you to see all the relevant input fields and output datapills that you have defined in your actions and triggers.

In this view, you'll be able to see any dynamic inputs or output fields as you change the inputs given in the debugger UI. Optionally, you may also switch to the Raw JSON view to provide the input JSON for your action directly. This comes in handy when you are debugging an action or trigger where you have the inputs from the recipe itself. You can toggle to raw JSON view in the top right hand corner of the UI popup under Change view.

Testing individual pick_lists, methods and object_definitions are not supported on the cloud debugger. However, a simple workaround is to create a sample test action that can tests these pick_lists before you use them in your intended actions/trigger.

Formula mode does not work in the UI popup today and this feature is disabled. However, in some cases, you can see some fields that use formula mode by default such as arrays of primitive types. For example

In cases like these, you will need to use the raw JSON view of the debugger to provide your inputs manually.