Modals allow you to build rich, interactive, and dynamic views that collect information from users in a structured manner. This is done by using the Open/update or push modal view action. 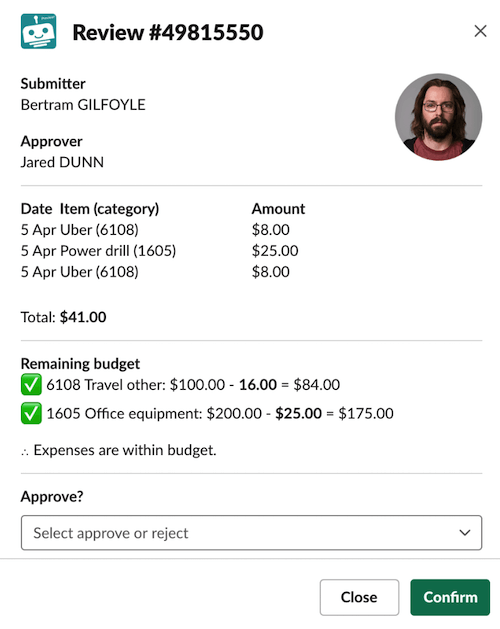 Modals views are built using blocks. A modal view has a title, the view (comprised of blocks), and submit/close buttons. You can also use modal-only blocks called input blocks. These are:

Input blocks work differently from the interactive components from other blocks.

While buttons, menus, and other interactive components invoke commands when clicked, input blocks only invoke commands when a view is submitted. For example, a user is free to choose from 'Approve' or 'Reject' – the value is only locked in once he submits the modal by clicking the submit button. 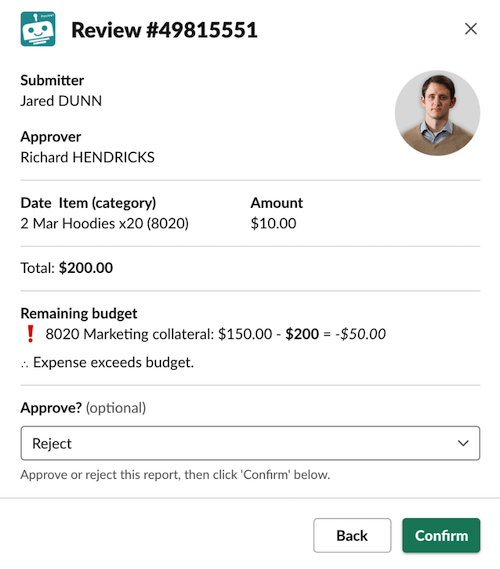 The user's choice is only locked in after clicking submit

A modal can hold up to 3 views at one time in a view stack. Users will only see the top-most view, also called the active view. View stacks are useful as it allows the user to return to previous views, after submitting/closing their active views. 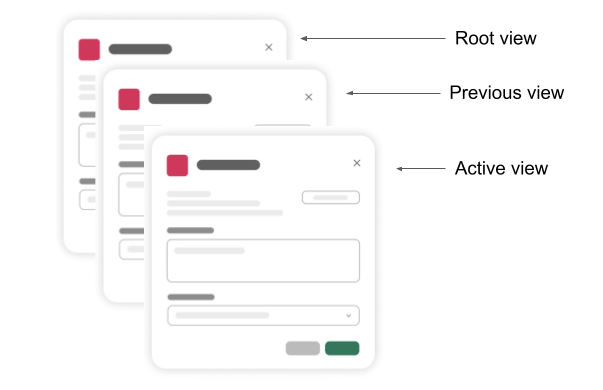 Each modal can stack up to 3 views

Opening a modal opens in the root view. Updating a modal replaces an existing view you specify (through its View ID), while pushing a modal view applies a new view on top of the view stack.

Each view has an associated ID. You'll need this view ID if you want to update an existing view.

Parameters can be passed either in comma-separated name-value pairs, for example, name: John Smith, user_id: AB12345 or in JSON, for example, {"opportunity_id": "OPP1234567"}. When using JSON, you can also pass array or object parameters.

Modals can be opened using:

The components above invoke a bot command and generate a Trigger ID. The New command trigger can then pick it up. Trigger IDs are mandatory for modals – opening, updating, and pushing modal views all require this trigger ID.

The New command trigger datatree contains a Modals object which stores modal-related context for you to perform modal actions.

This action allows you to build rich, interactive, and dynamic modals that collect information from users in a structured manner. Modals are built using blocks.

You can open a new modal view, update an existing view, or push a new view on top of an existing one by setting the Modal action type to open, update, or push respectively.

For all modal action types, Trigger ID is always required. Trigger IDs are generated by Slack when users interact with:

Opening a modal view requires Trigger ID, obtained from the output of a New command trigger.

Updating a modal view also requires Trigger ID, but you must also specify the View ID of the view to update. This View ID can also be found in the New command trigger datatree, under Modals.

# When to update modal views

Making changes on the active view

In contrast, modal submissions usually update the root view (Root View ID) or the previous view (Previous View ID). These views can be found in the New command trigger datatree, under Modals.

When a view is submitted, it closes by default. Use the correct View ID when updating views in response to view submissions.

# When to push modal views

Typically, bot commands push views on top of the active view they exist in (View ID). The View ID can be found in the New command trigger datatree, under Modals.

Making changes on the active view

When a view is submitted, it closes by default. Take care to only push a modal view on top of an active view.

The following table describes the configuration when using this action.

← Block kit
Using Dialogs with Workbot →
On this page