Workbot can be used to invoke Slack Dialogs (opens new window); an awesome Slack feature that allows you to elicit info in a more interactive way.

Workbot can invoke dialogs to, say, collect info from a user to open a ticket in Github, amongst other things.

To create a dialog workflow, you need 3 recipes to perform 3 high-level functions: 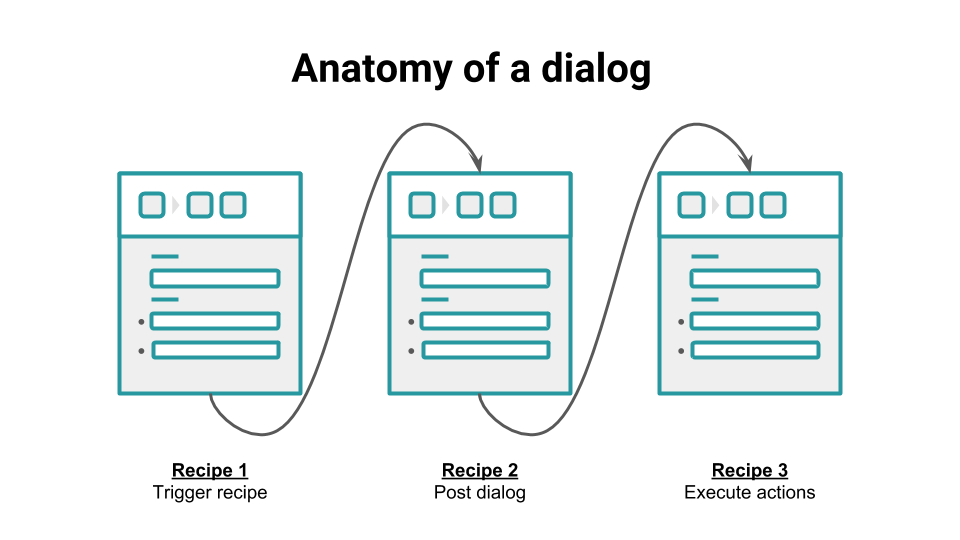 From a recipe standpoint, the first recipe triggers the Trigger recipe, which in turn triggers the Execute actions recipe.

This is because invoking dialogs requires Trigger ID, something that's only generated from button or menu option click events on Slack.

Regardless of which Workbot action you choose, the dialog recipe can be triggered via 2 methods:

The Submit button command field is especially important - this command will trigger the recipe that posts the dialog (i.e. the Trigger recipe). 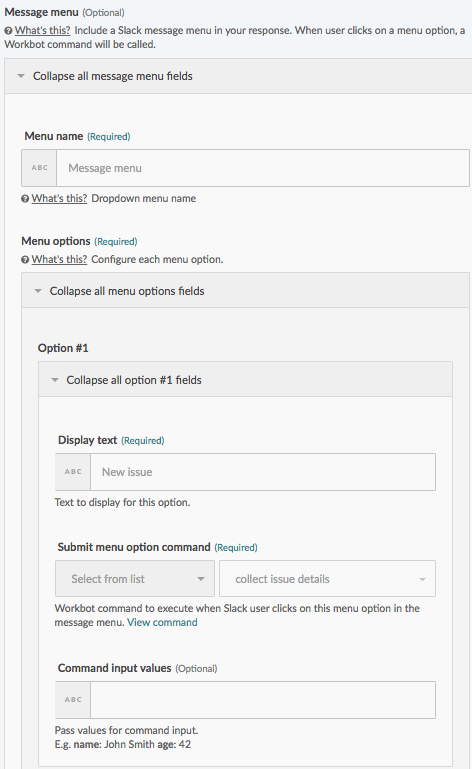 The Submit menu option command field is especially important - this command will trigger the recipe that posts the dialog (i.e. the Trigger recipe)

Clicking either buttons or menu options in Slack triggers an event that comes with a Trigger ID, a parameter necessary for invoking dialogs.

In the example above, both the button and the menu option sends a Workbot command to collect issue details.

To ensure that the dialog in this recipe is the one to be invoked, the submit button or menu option commands in the Trigger recipe must map to the Post command trigger in this post dialog recipe. 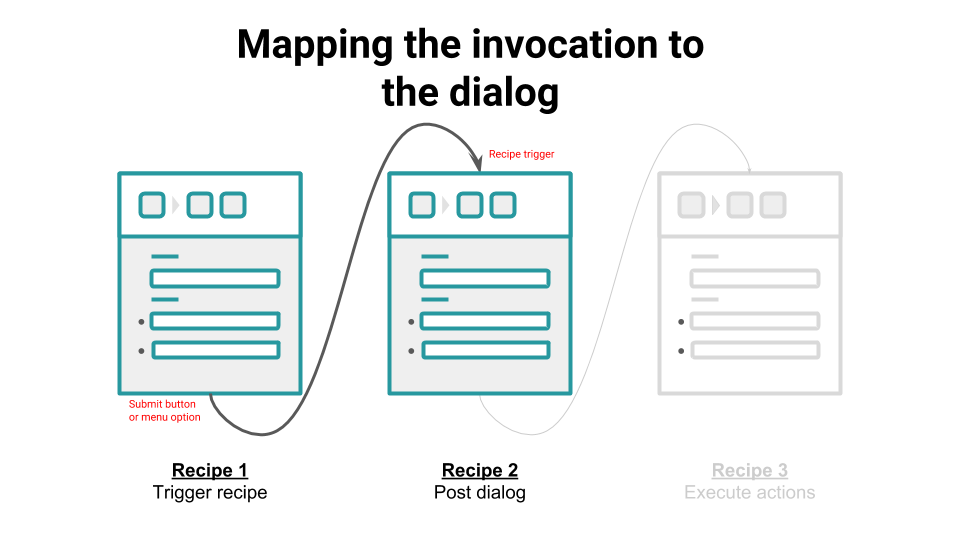 The Post dialog recipe uses the Workbot Post command trigger to receive commands from the buttons or menu options in the trigger recipe. 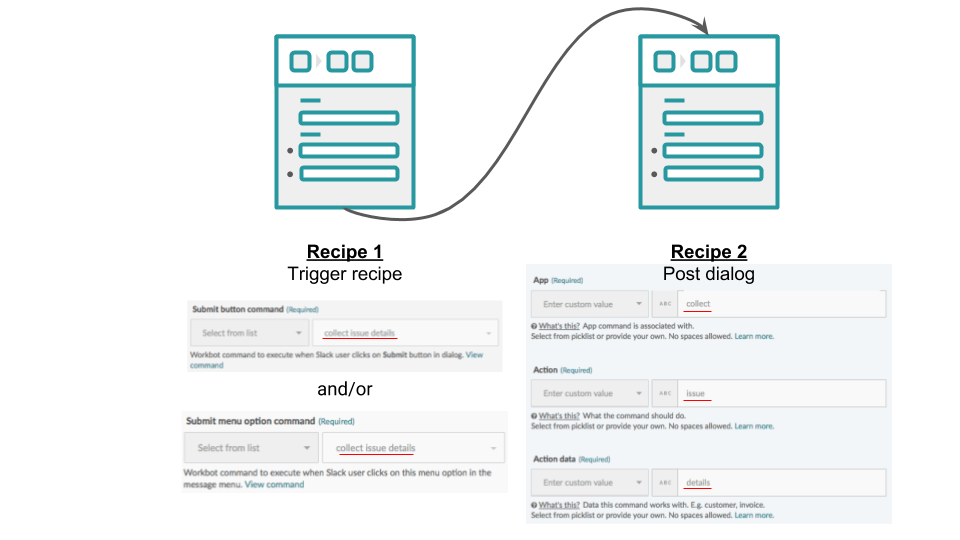 The following table lists the available fields in the Post dialog action.

The Submit button command field is especially important - this command will trigger the recipe that executes the actions (i.e. the Execute actions recipe).

To ensure that this recipe is the one to be executed by the dialog, the submit button command in the Post dialog recipe must map to this recipe's Post command trigger. 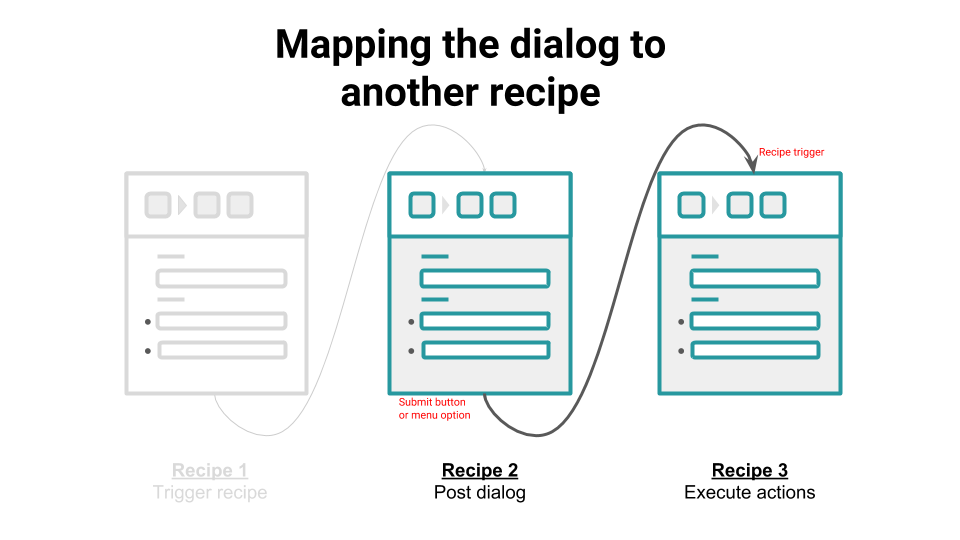 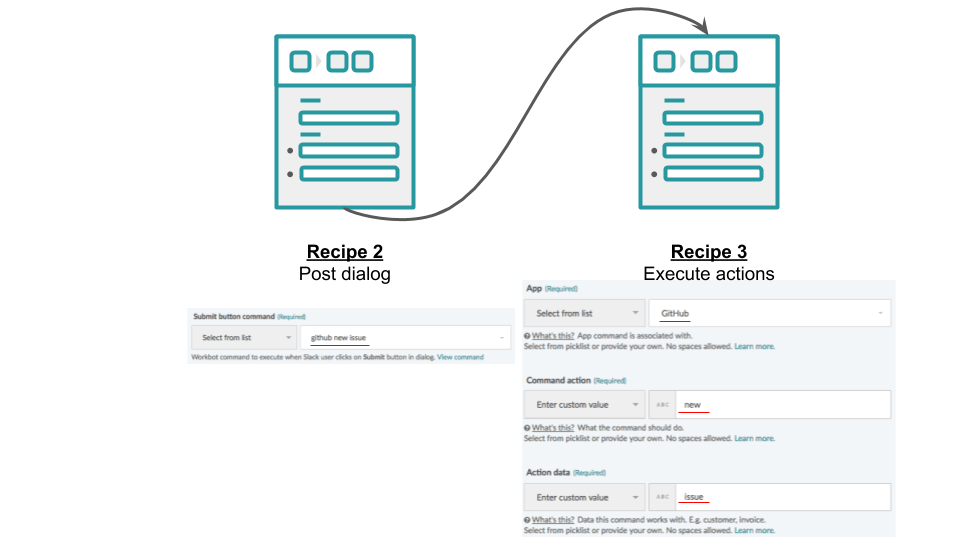 Given that dialogs involve using multiple recipes, it's normal to encounter some issues at the start. Here are some common pitfalls when using dialogs. 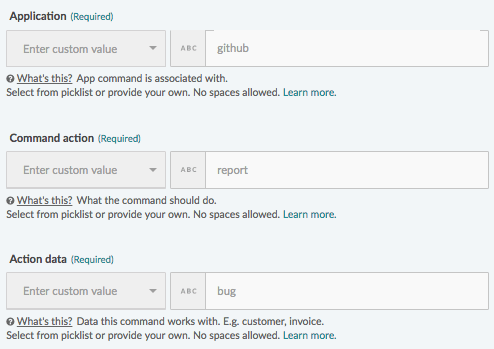 Ensure that the combination of all 3 App, Action, and Action data of Post command triggers in any of your recipes are unique across your Workato account. Any submit button or submit menu option command should only be mapped to 1 recipe.

For example, the recipe above should be the only recipe in that Workato account to have github report bug as its Post command trigger.

Ensure that the Submit button command and/or Submit menu option command of a recipe is correctly mapped to the Post command trigger of the secondary (or tertiary) recipe.

Ensure that dialog form field names from the Post dialog recipe correspond with the command input fields of the subsequently triggered recipe. 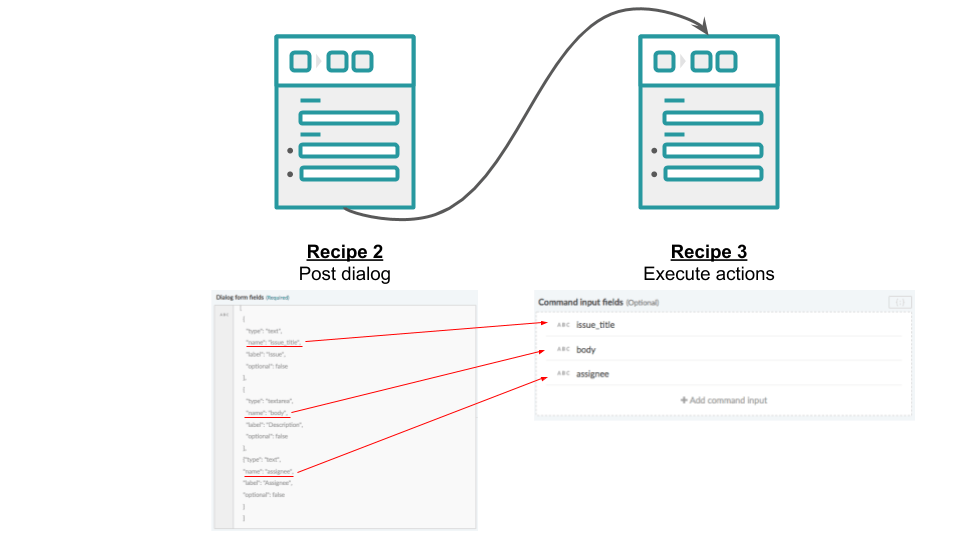