APIs that are exposed through the API Platform console can be called from recipes in accounts other than one owning the recipe, as well as from third-party tools, programs, and scripts. The API manager must provide the Auth Token or JWT token value to the client to call any endpoints in an API Collection.

With raw content support, the API platform allow clients to send text based (for example, XML/SOAP) requests and receive custom responses from the API recipes exposed as REST endpoints. This extends the security benefits of Workato's recipes to API calls from other systems. Learn more.

# Calling An API Endpoint From A Recipe

An API endpoint that belongs to another user can be called from a recipe using the HTTP Connector. Select the Send request action of the Connector. The following screen shows a typical configuration for this action (in this case a POST request): 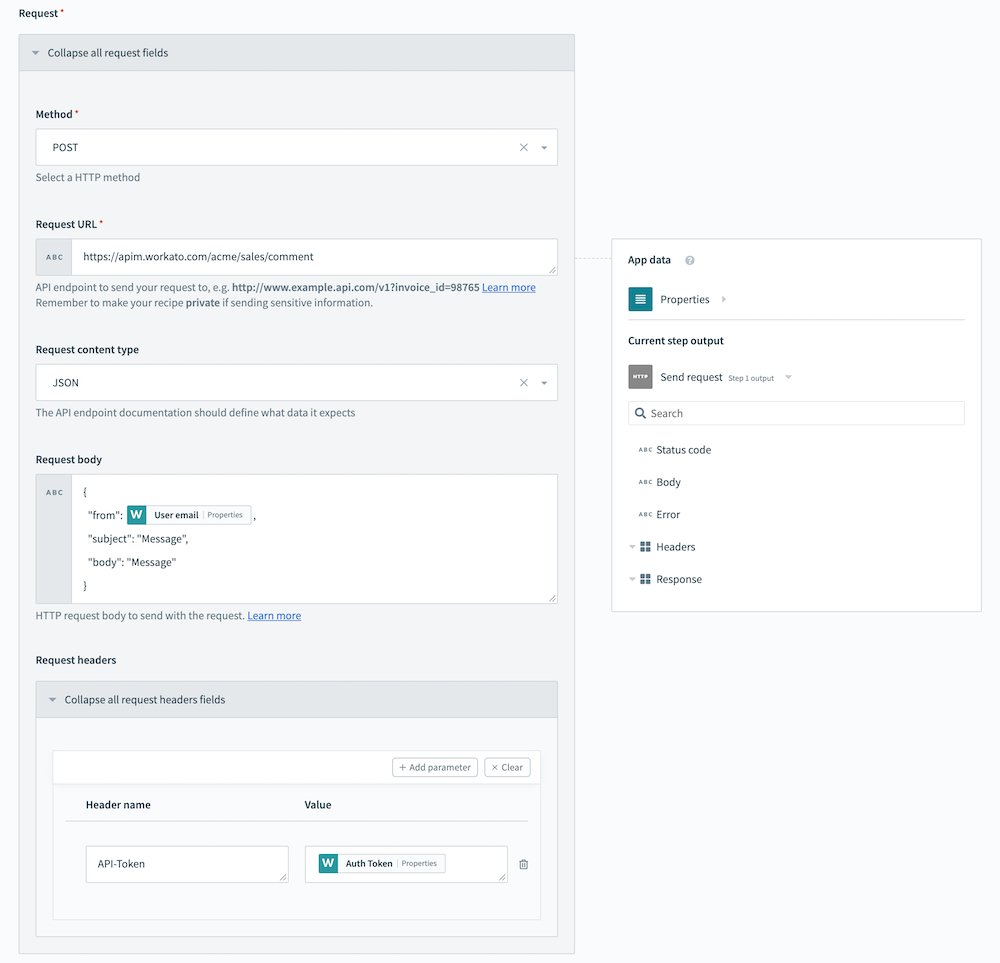 Make sure that the type of request (POST, PUT, GET) matches the API that you are calling. Any required fields need to be specified in the body (for POST and PUT) or as query parameters in the URL (for GET).

Also, note that an API-Token request header has been added. Its value should be set to the token that the API owner has supplied to you. (This assumes the Auth Token method of authentication).

Do not hard-code API tokens into input fields. Check out the recommended security best practices for guidance.

Using the recipe test feature, you can run the recipe a single time and have it generate a call to the REST API. If successful, the API will return a 200 status and the recipe execution will continue to completion. There are several possible errors that can occur. These are the common ones:

# Calling The API From Other Clients

Clients can access the Open API description for the service by performing a GET request on the API URL and adding /swagger to the path. This URL should also have the API token as a query parameter.

For example, if the API URL is https://workato.com/doc/service/sales-api-v1, the Open API description is available at a URL similar to the following:

← API Prefix
Workbot →
On this page