# How to connect to Iterable on Workato 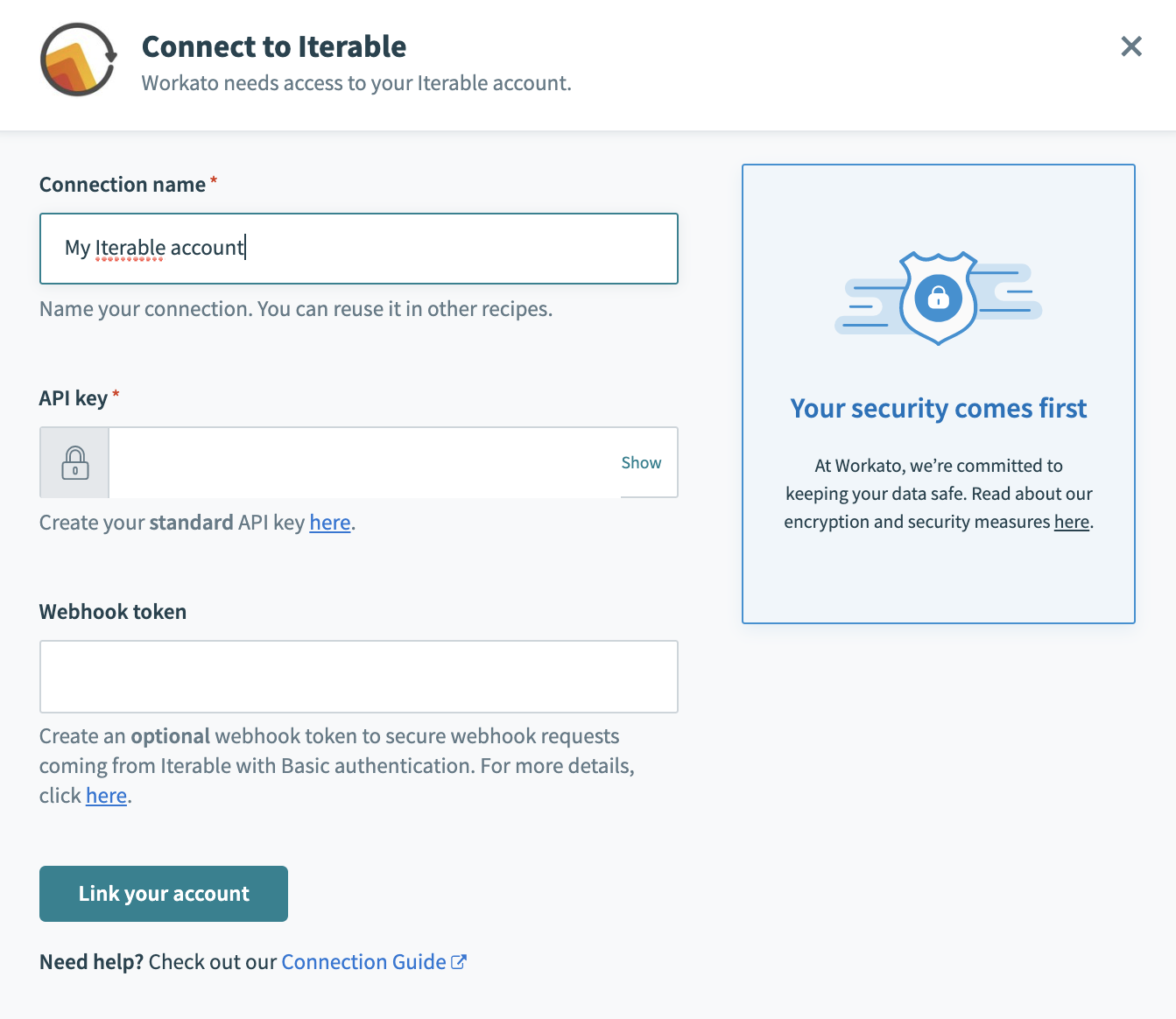 The Iterable connector supports the following triggers and actions.

After configuring the webhook URIs, you’ll now be able to configure your webhook triggers for both system webhooks and workflow webhooks. 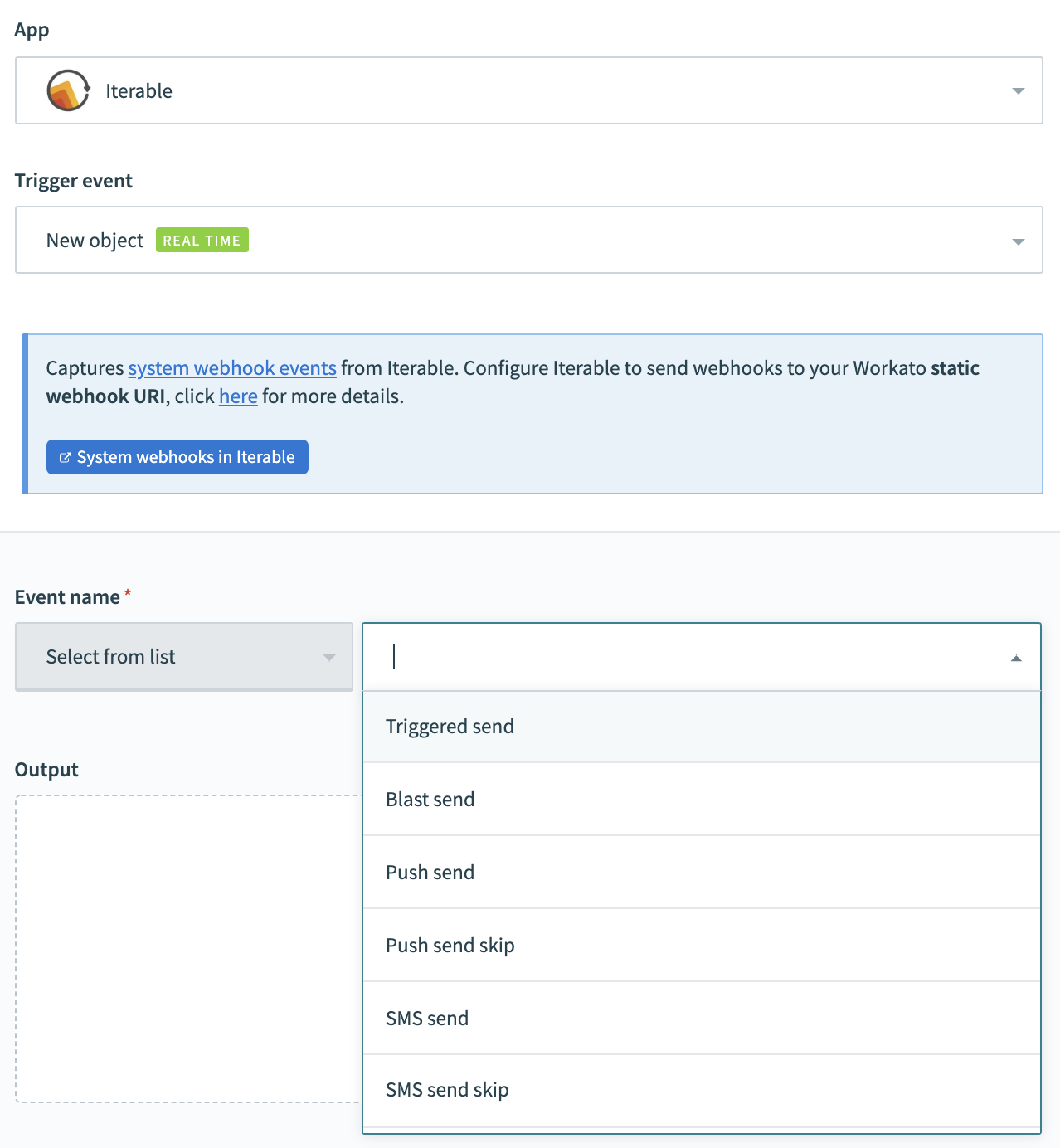 When configuring a new object trigger, first select the event you want to listen on. The system webhook registered should have the corresponding event enabled on the Iterable UI. 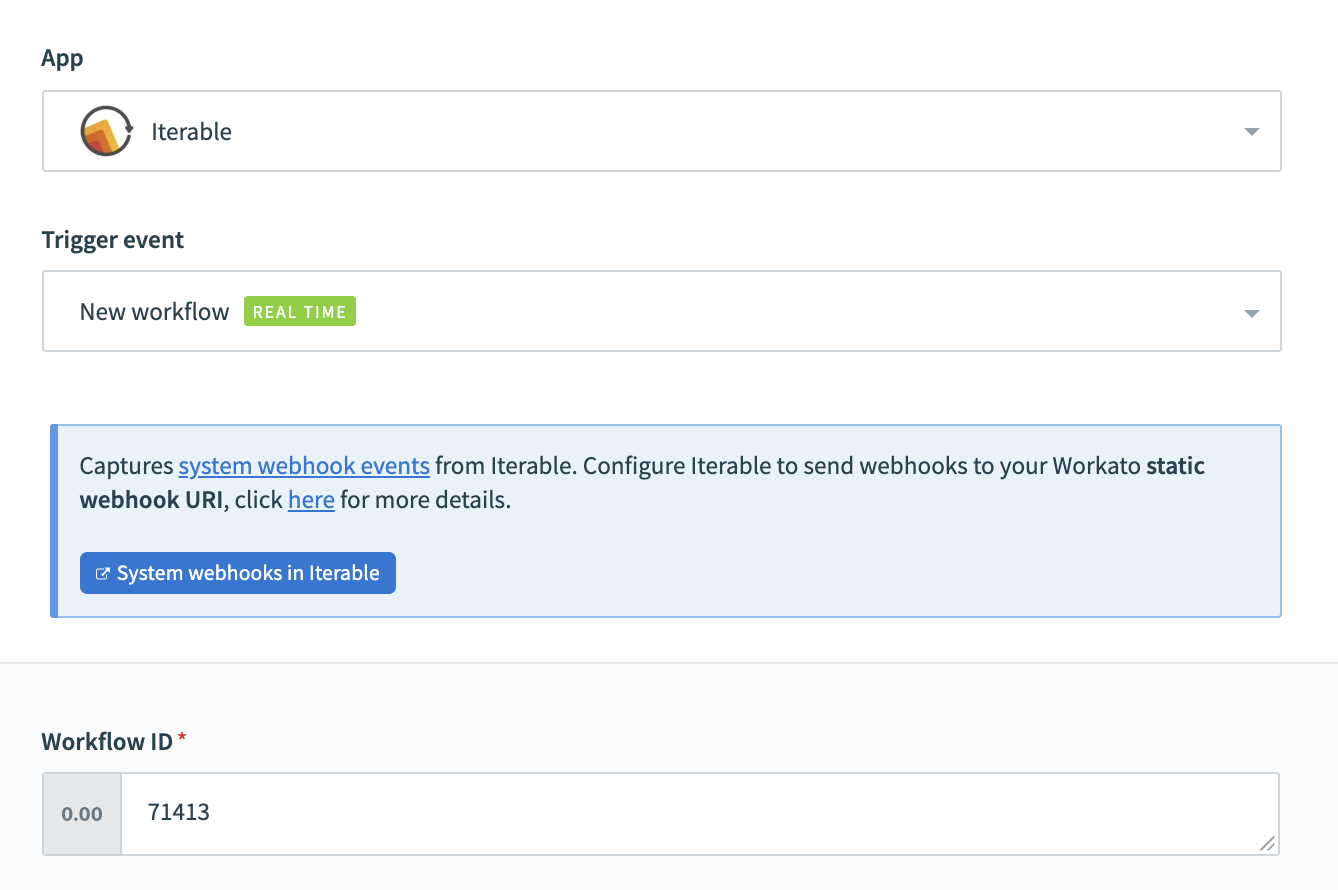 When configuring a new workflow trigger, provide us with the workflow ID which calls the webhook you have just made. This can be found in the URL of the workflow editor. I.e. if the url is https://app.iterable.com/workflows/1234/edit (opens new window) then the workflow ID is 1234.

All triggers have a schema designer for you to define the expected webhook payload. Defining these fields allow you to use attributes in the payload in downstream actions. There are 2 ways to define the output field. 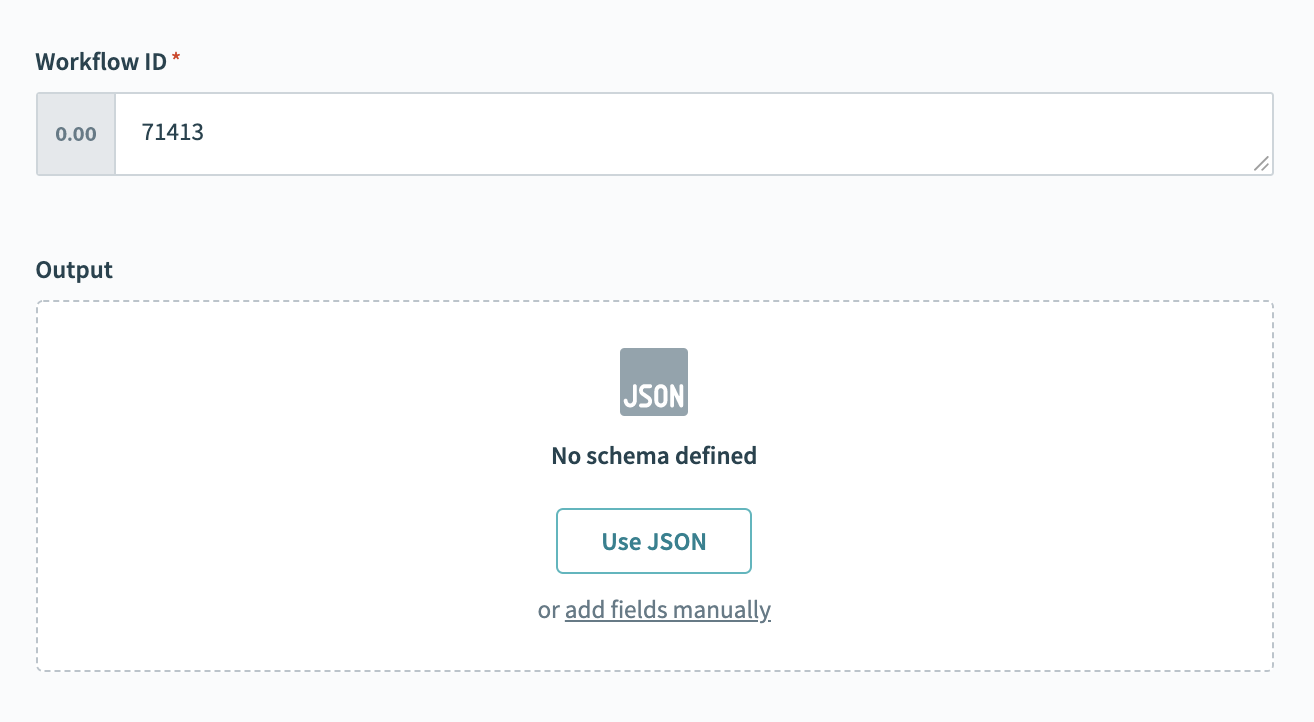 Start the recipe without configuring the output schema and send a test event to the trigger. You can then use the payload in the job history to observe the structure of the expected payload.

Copy this payload and paste that into the schema builder using the json wizard and all fields will be populated automatically.

Manually define the fields. The names in the fields must match the keys in the json payload exactly.

Actions in Workato allow you to create, update, and retrieve information about objects in Iterable. Use these actions to add or update user attributes, add people to lists or even send smses. Most inputs in the Iterable connector are self-explanatory and request inputs for standard fields in Iterable.

# Working with the data fields input

Some actions in the Iterable connector will have an input field called “Data fields”. This is where users can configure and create or update objects in Iterable whilst also interacting with their custom fields. 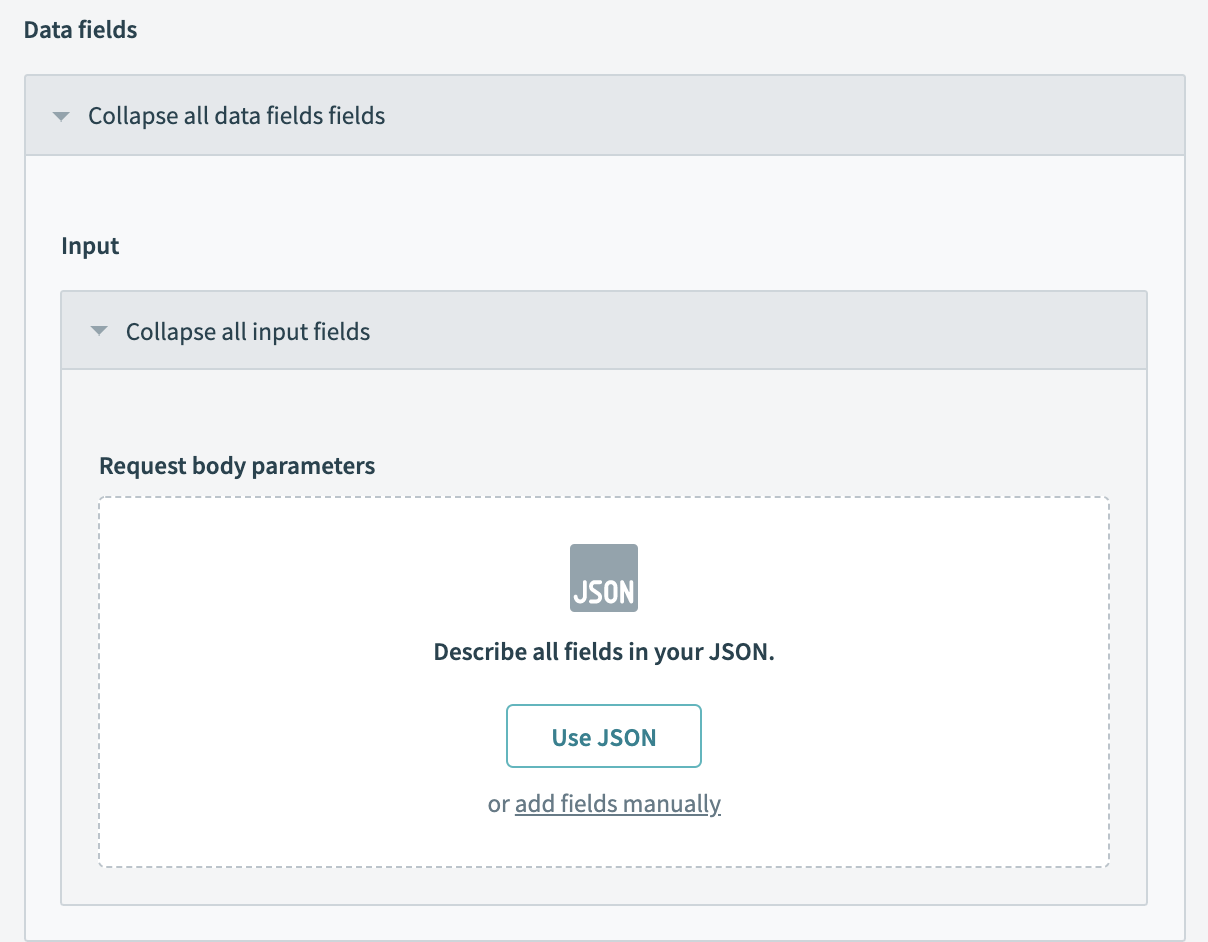 Users in Iterable are able to have custom attributes that can be created/updated during the creation or updating of the user. For example, we have this user below with fields “new_field” and “test_field”.

We can use the input field called “Data fields” to change the values in existing field or even add new field by first defining the names of the fields we want to update and then populating the input fields that appear below. The names defined must match exactly when defining the request body parameters. 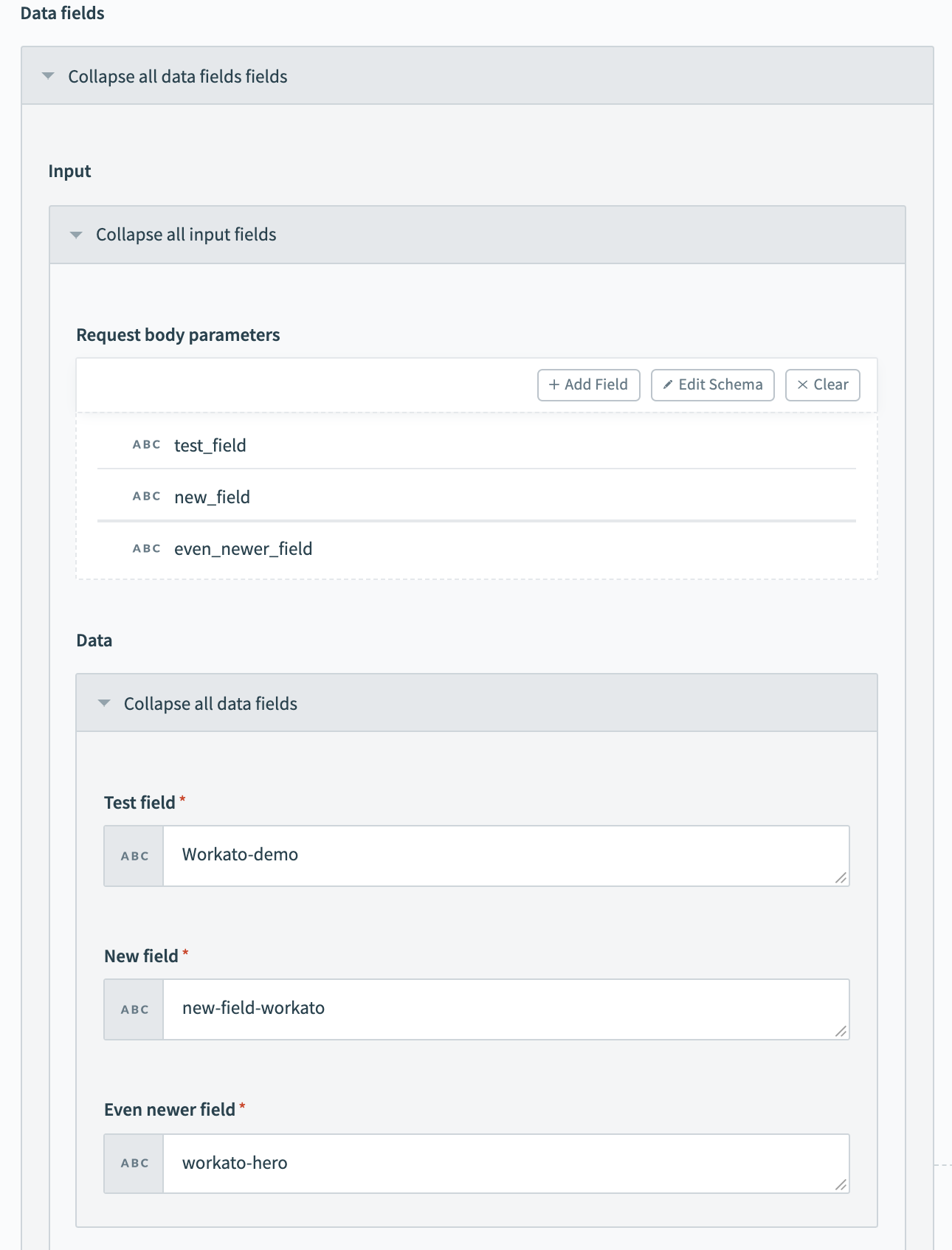 This results in the following object: 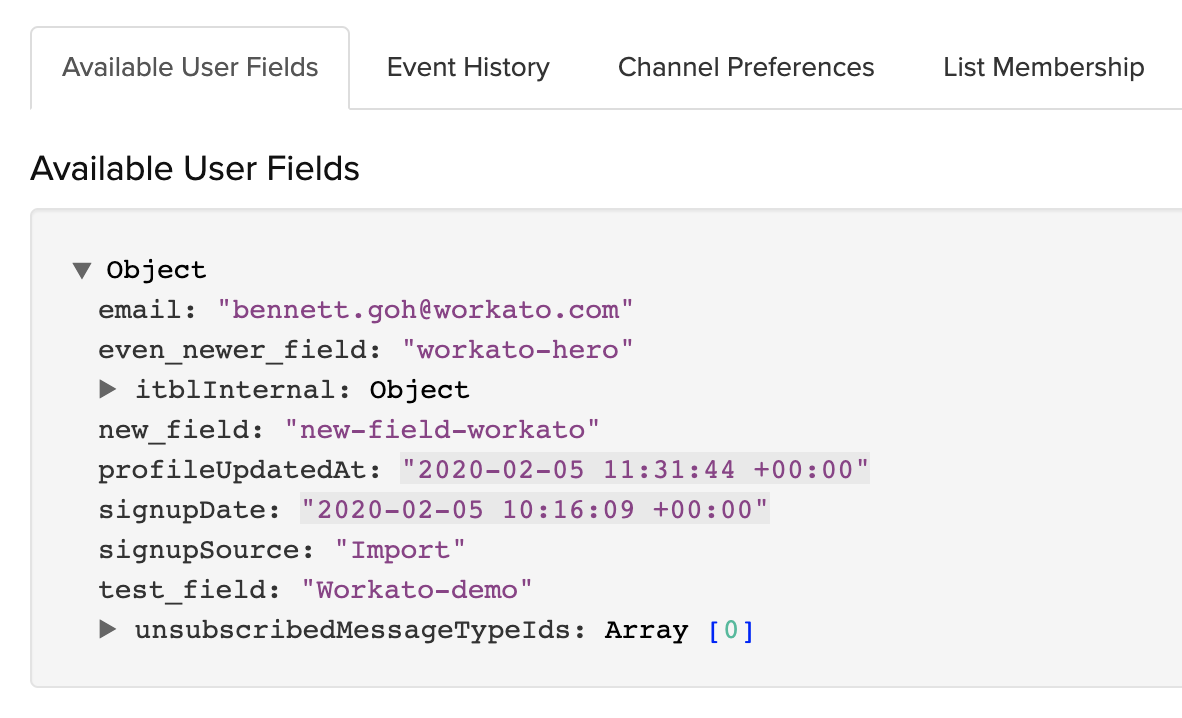 ← Connection setup
JavaScript →
On this page