# How to connect to SQS on Workato

# How to retrieve IAM role ARN

Follow these steps to retrieve the Role ARN required for the connection setup. Remember to use the Workato generated external ID found in the connection page.

Navigate to My Security Credentials.

Every Workato user will have a unique External id (for example, workato-user-84762). You can find this value in the IAM role ARN portion of the connection setup. 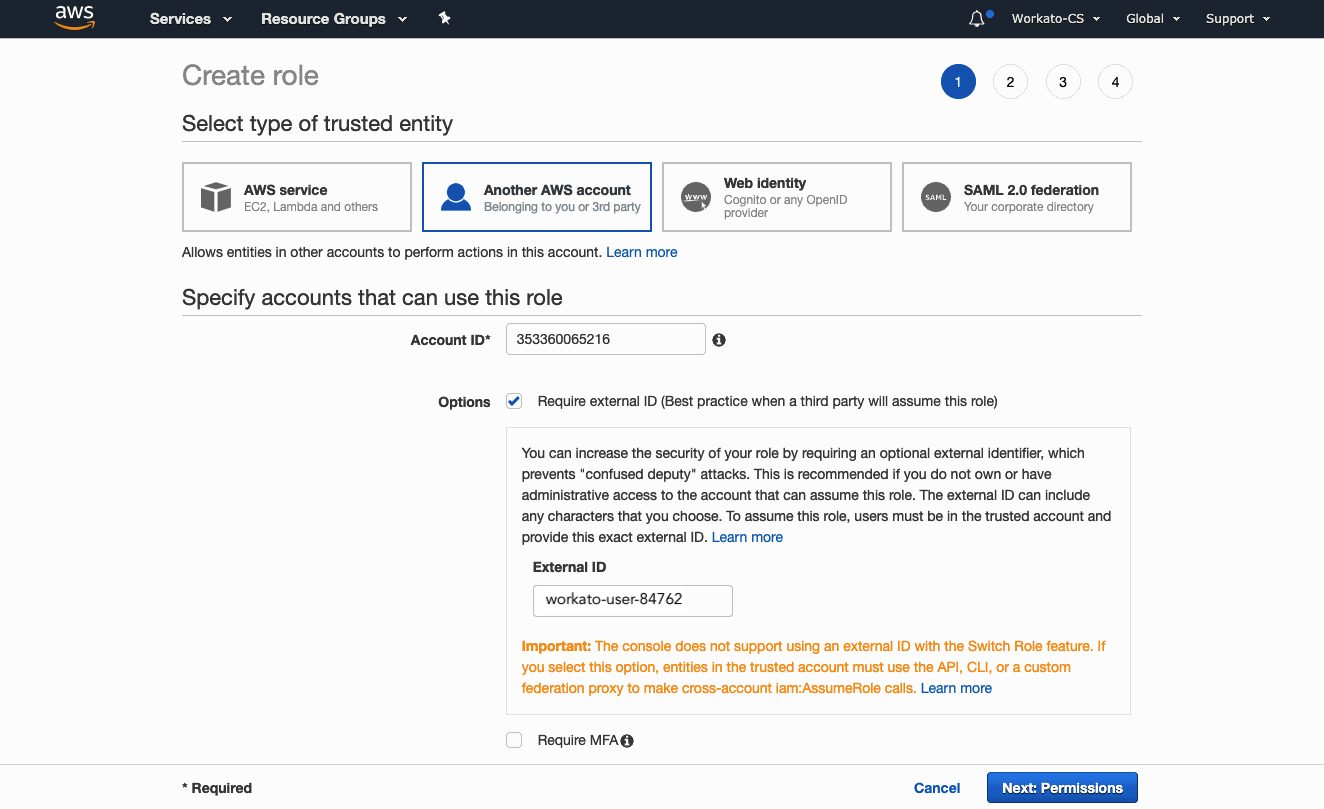 Select proper permissions for Workato to run automation in your Amazon SQS. Read below to see what permissions are required.

(optional) If you are using object taggings, select an appropriate tag for this IAM role. 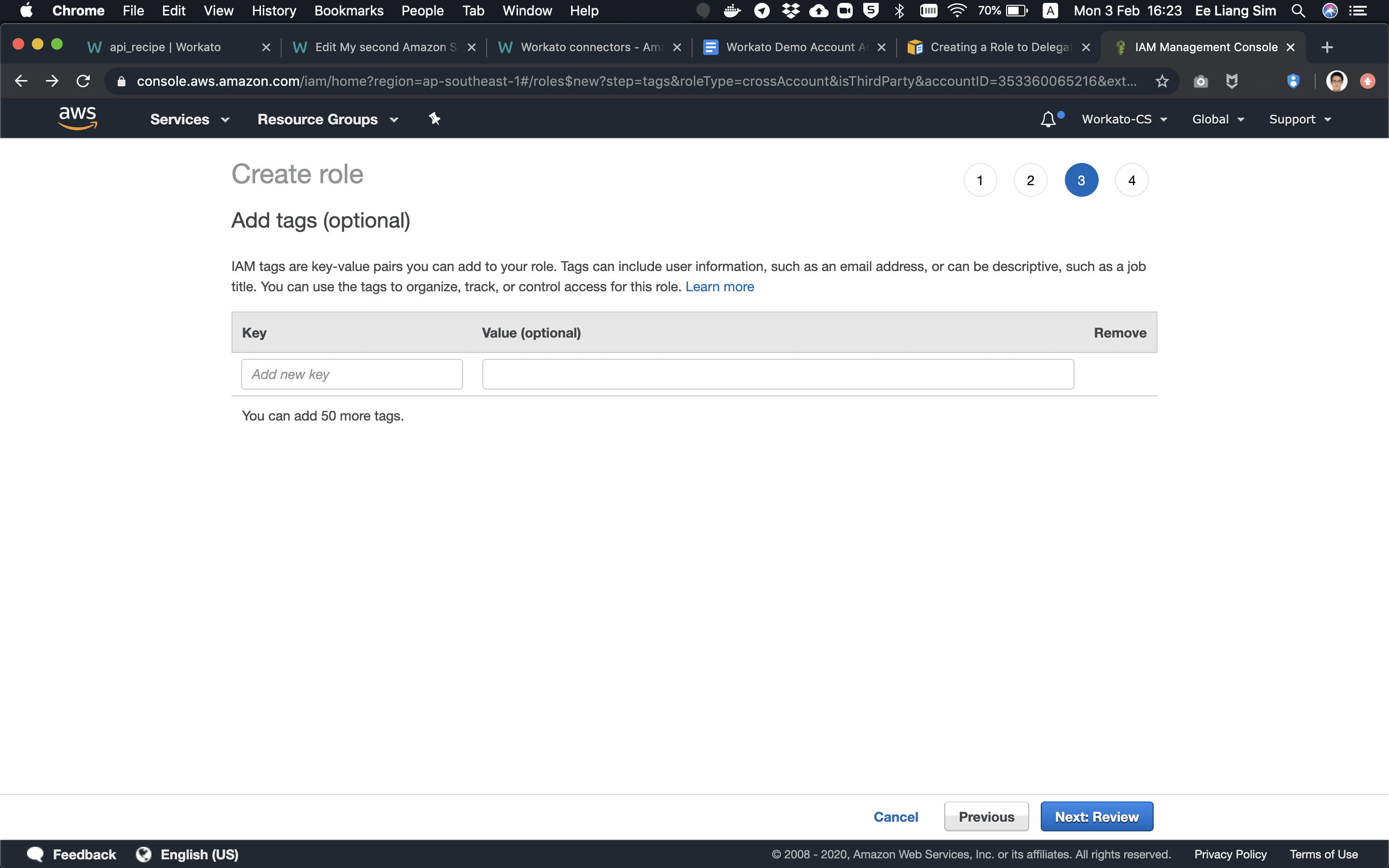 Give this IAM Role an appropriate name & description.<

Workato recommends that role name avoids using a non-guessable resource-id in the urn and does not include the external id.

The IAM Role is now created. Select the role. 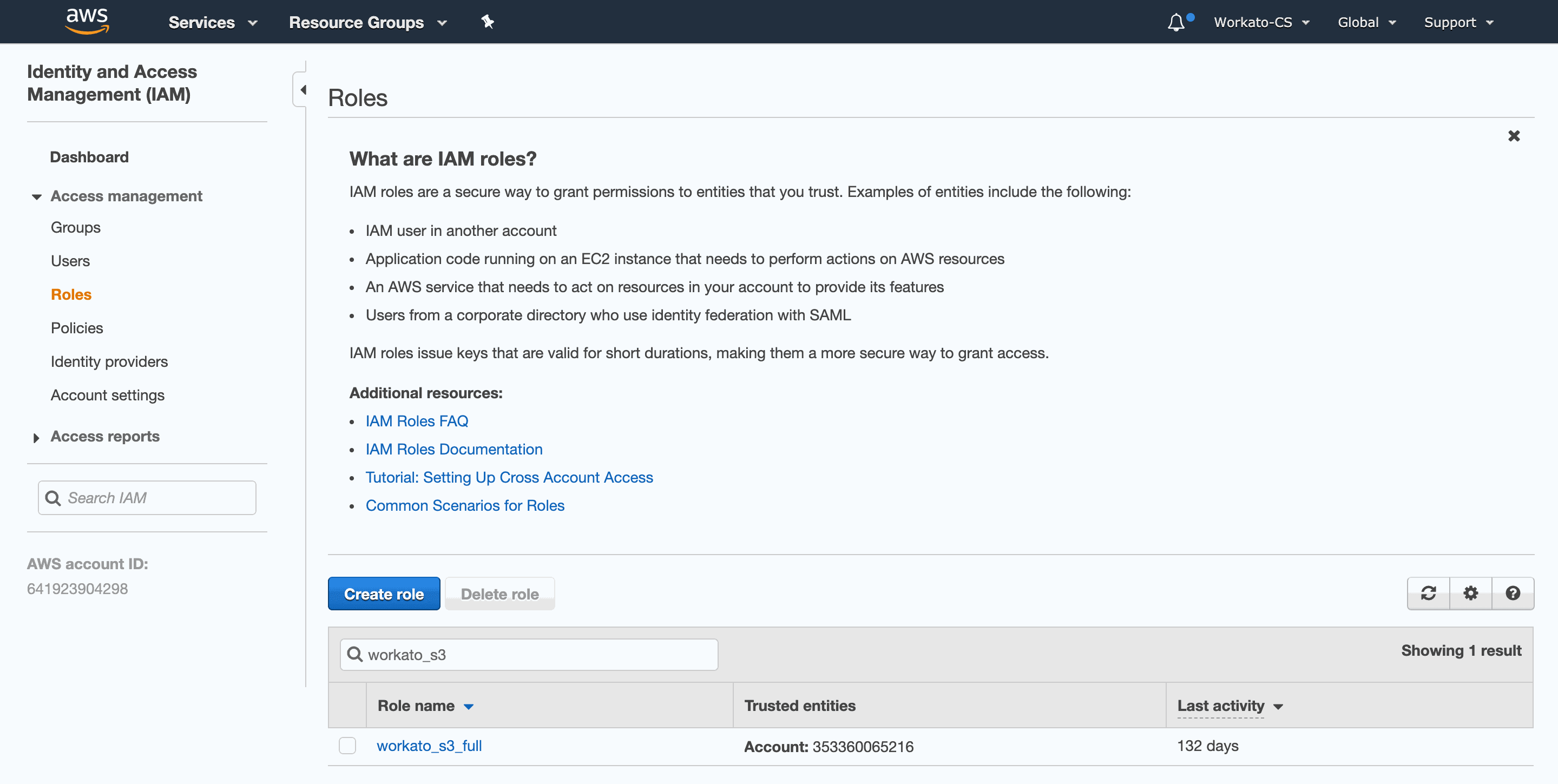 Copy the Role ARN. You will need to use this in the connection setup when creating an Amazon S3 connection in Workato.

You may use the AmazonSQSFullAccess policy for this IAM role. At a minimum the SQS connector requires these permissions:

For establishing connection, we use "List Queues" to test connection, but if you have access only to a single queue or to a few specific queues, the connection will still work and you can proceed to perform operations on those queue by manually adding the queue name in the actions.

The terminology (opens new window) for basic Amazon SQS objects can be found below.

There are two types of queues in SQS:

Only standard queues are supported by the Workato SQS connector today.

When a consumer receives and processes a message from a queue, the message remains in the queue. Amazon SQS doesn't automatically delete the message. Because Amazon SQS is a distributed system, there's no guarantee that the consumer actually receives the message (for example, due to a connectivity issue, or due to an issue in the consumer application). To aid in this, the Workato SQS connector allows you to automaticaly delete messages when you retrieve them in triggers. Alternatively, you may also use the Delete messages action to delete messages after you have processed them in your recipe.

To mitigate this, Workato uses long polling with a wait timeout of 5 seconds. This means when Workato attempts to retrieve messages in triggers or actions, we will wait up to 5 seconds for messages to arrive at sampled servers. You may configure this timeout for actions using the input Wait time (seconds).

The Workato connector defaults to 12 hours instead of SQS's 30 second default to minimise the possibility of jobs having the same messages. You may configure this timeout using the Visibility Timeout input field.

Messages in an SQS queue have to be deleted to be considered processed. In cases where messages have been left in a queue for a set amount of time (configurable in SQS) or retrieved too many times, they are then stored in a dead-letter queue for debugging.

Workato does not actively support messages stored in dead-letter queues but recommends you set alarms to be notified on such messages being stored there. Learn more. (opens new window)

# Duplicate messages are observed across jobs

In some cases, your jobs may be processed too slowly and messages that were retrieved by Workato have passed their visibility timeout and are eligible to be retrieved again. In such cases, you may see duplicate messages across different jobs.

Our recommendation is to increase the visibility timeout or delete messages as they are retrieved.