Want to build actions for a connector that Workato already supports? Custom actions enable you to use the existing connector framework to build new actions, instead of building something from scratch via the HTTP universal connector or the SDK. Custom actions allow you to easily build your action by telling Workato what the action's request and response should look like. This can be obtained from the API documentation.

Building a custom action is an accelerated way of building an action via the HTTP connector, as the custom action utilizes the connector's existing authorization framework and already understands the API for that app.

Most apps on Workato support custom actions. Custom actions can be found in the actions picklist of the connector.

The custom action will list the scopes available. Typically, you can only read or write to objects that you have scopes for. For example, when we select custom action for the Slack connector, we see that only the following scopes are included:

If you build an action that requires additional scopes, the action will throw an error when it tries to make the request with the API. For example, this error is returned when we try to build a create reminder action in Slack, as we have no reminders:write permission.

Scope error returned by the API when call is made

If you'd like to see custom actions or additional scopes added to a connector on Workato, contact the Workato team to file an enhancement request.

This section details the configuration input fields in the custom action.

Let's build a custom action on the Slack connector to list channels. We can refer to the Slack API documentation (opens new window).

First, select the custom action on the Slack connector. 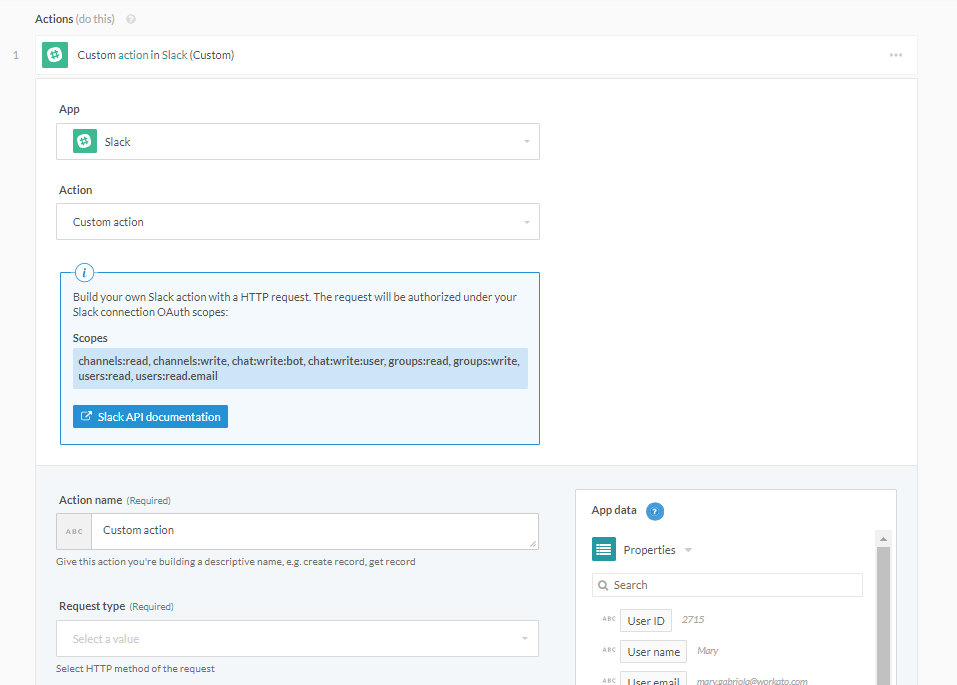 Give this action a name. We'll name it "List channels" in this case. Notice that this changes the title of the action as well.

Select the HTTP method of the request, based on the API endpoint you're calling. The API documentation should tell you the HTTP method. Slack's API tells us that list channels uses a GET method.

Once selected, relevant input fields show up in the action for you to fill.

Additional fields show up when you select HTTP method

Next, we'll define the request sent. For this API endpoint, there are no required arguments except for the authentication token, which is already handled by Workato via your established Slack connection. 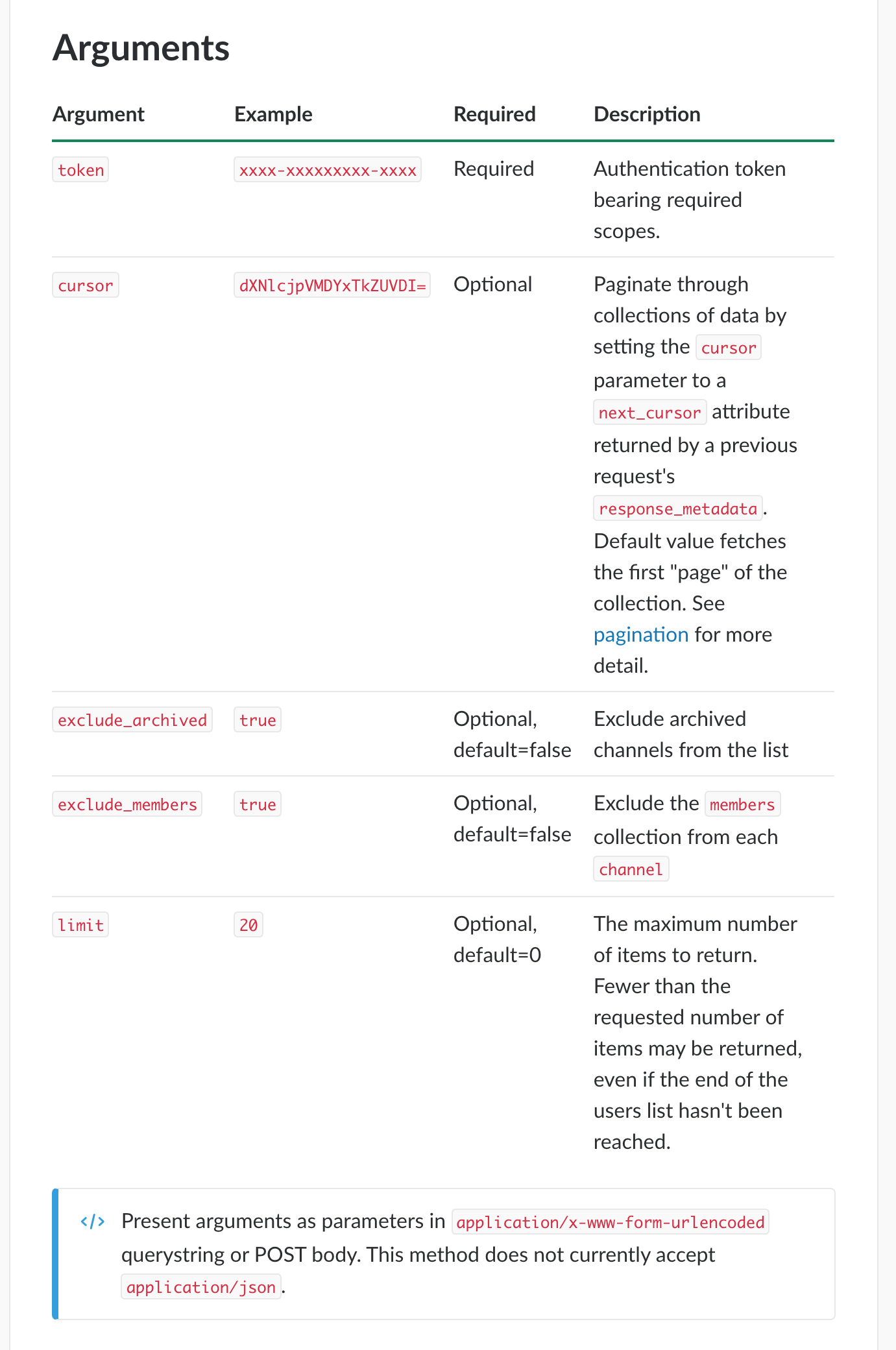 We'll send in arguments anyway to optimize the response we get from the Slack API. Let's exclude archived channels, exclude member lists, and limit the number of channels returned to 20. To do that, we'd need to define the params of the request, before actually providing any values. We're defining 3 params manually: exclude_archived, exclude_members, limit.

After defining the params, we need to provide the values we want for them. In this case, we're hardcoding the values, but you can also replace these values with datapills if you wish to pass in variables.

Filling in values for params

We can copy this and paste it in Workato to generate the output datatree.

This tells Workato what response schema to expect, and the datapills generated can be used in subsequent steps of the recipe to move data into other apps.

However, if the actual response does not contain the data you have specified in this response sample, the datapills will not have a value.

For example, the above response body contains the member list, which we have excluded with the URL params exclude_members is true in our custom action. If we include the member list in our response sample, it will show up as datapills in the datatree, but will not have values until we change the value of exclude_members to false.

We now have our completed Slack custom action - we should now test it. If you want to quickly test a custom action without a trigger, you can use the Scheduler New scheduled event trigger.

When the above action was tested, we can see the input passed into the action in the detailed job history. 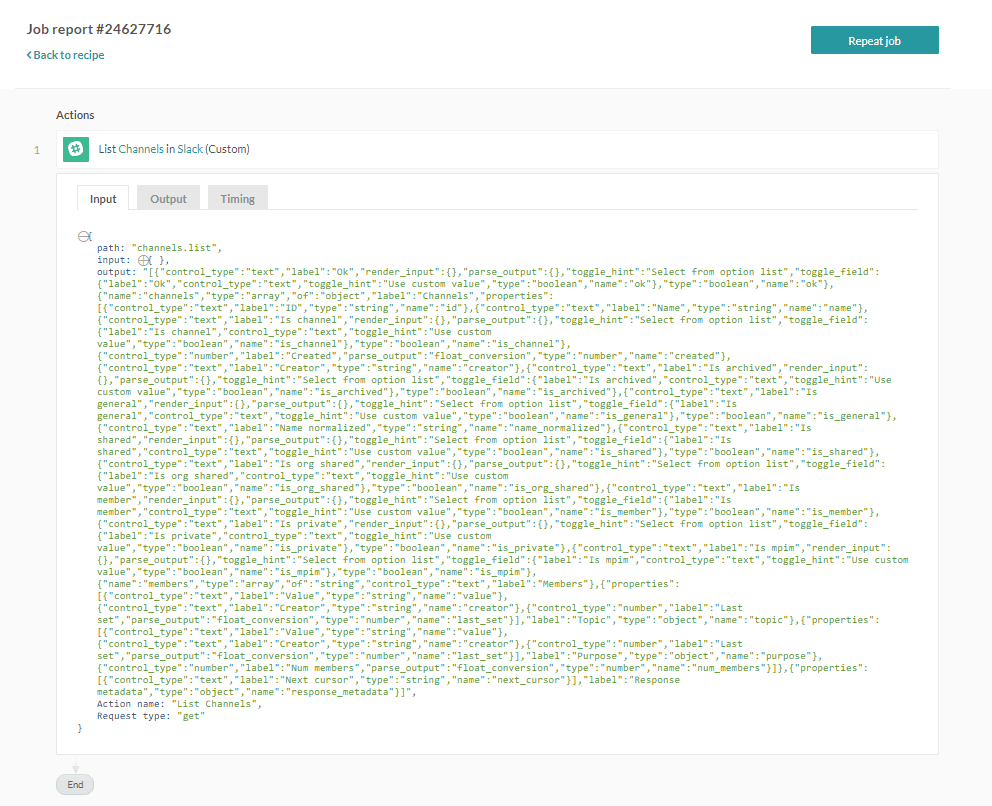 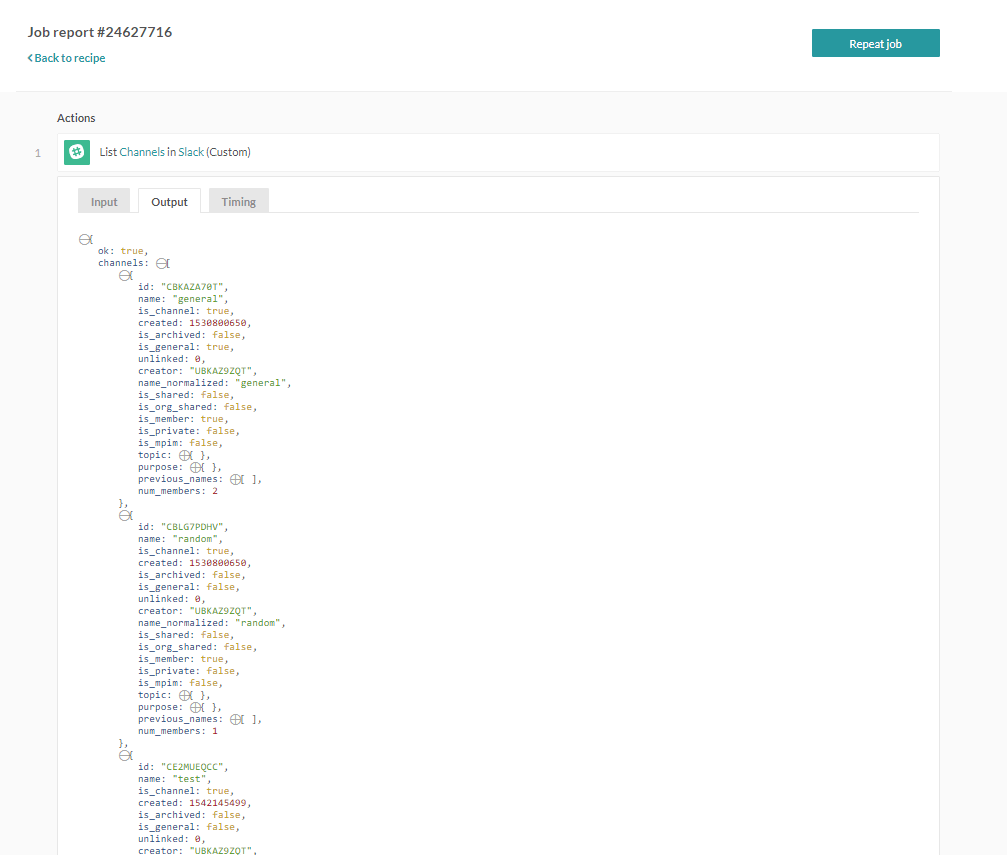