Integration projects by its very nature are moderate to very complex involving multiple business systems. Connecting to and updating of records in cloud applications like Salesforce, Workday, NetSuite, Marketo is easy to do with an integration platform like Workato. With varied use cases like employee onboarding (HR) or quote to cash (sales ops), many business systems and cloud applications like Workday, Salesforce, and others will typically be part of the automation. This poses a challenge to developers and analysts who are building recipes but run in to errors like HTTP 404 Not Found. Having no further information makes it difficult to debug and troubleshoot.

The job debug tracing makes it easy to see detailed HTTP requests and responses for each action line. With details like HTTP URL, request, and response headers, request payload and the response, there's a lot of detailed information for the developer and analyst to uncover the root cause of the problem.

For each action line in the recipe, job debug tracing provides

Job debug tracing is available for certain users. Reach out to your Customer Success Manager to learn more.

By default, the debug tracing privilege is available to users with Admin role or users who are owner of the Workato account. 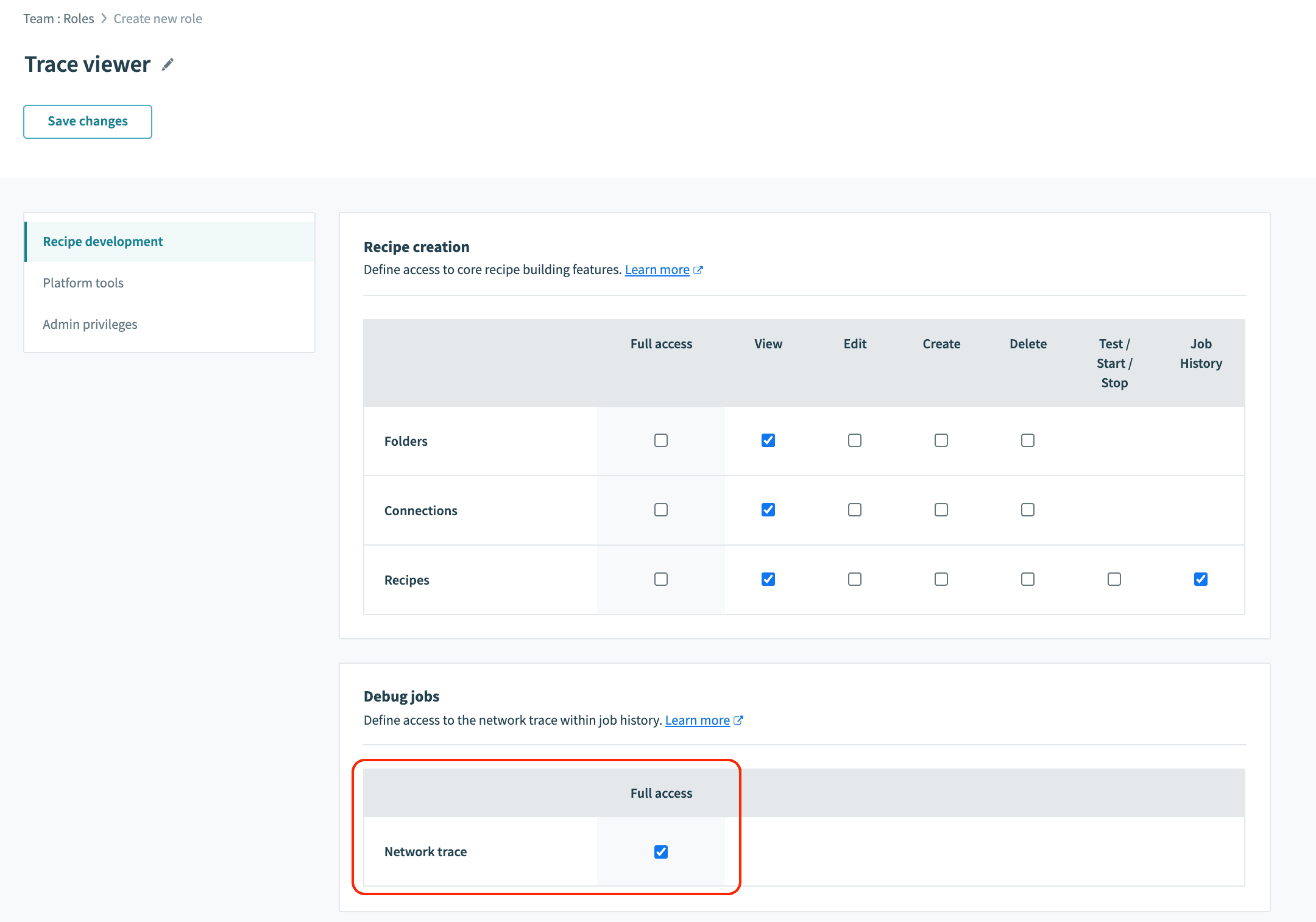 Assigning custom role to a user

We know data security is very important to our customers. We also understand you need controls so that sensitive data is only visible to authorized users. That's why we have created two layers of control to give you maximum flexibility.

Debug or network tracing is available when:

Network tracing gives you the tools to make recipes more robust by detecting and avoiding errors early on. During development you can test the recipe by going to the TEST JOBS tab and clicking the Test button. Testing a recipe validates the functionality and implementation of the recipe. The test job provides the network tracing in the Debug tab.

Developers can view not only the input and output but also the network trace of the HTTP calls made for the action. You can review and validate the information in HTTP headers, request, and response flowing between the recipe action and the end application.

Follow the steps below to generate and view the debug trace for a recipe whose job is in error.

In this example, the Update incident in ServiceNow has jobs in error.

To view the debug trace, you must repeat the job.

To generate debug trace, you need to repeat the job.

In the job details page for a job, click Repeat job.

If you have seen HTTP 404 Not Found or 400 Bad Request or 403 Forbidden and wanted more details about the error, now you can with the job debug tracing. Here's an example scenario, where update to incident table in ServiceNow fails with the 404 Not Found error. And how job debug tracing enables you to quickly and efficiently understand the root cause of the error by providing you more details.

Once the job is repeated, the latest repeat of the job shows the debug trace in the Debug tab of the action line.

Select the HTTP request line to expand and get more information on the request.

To view headers sent as part of the request, select the Headers tab. 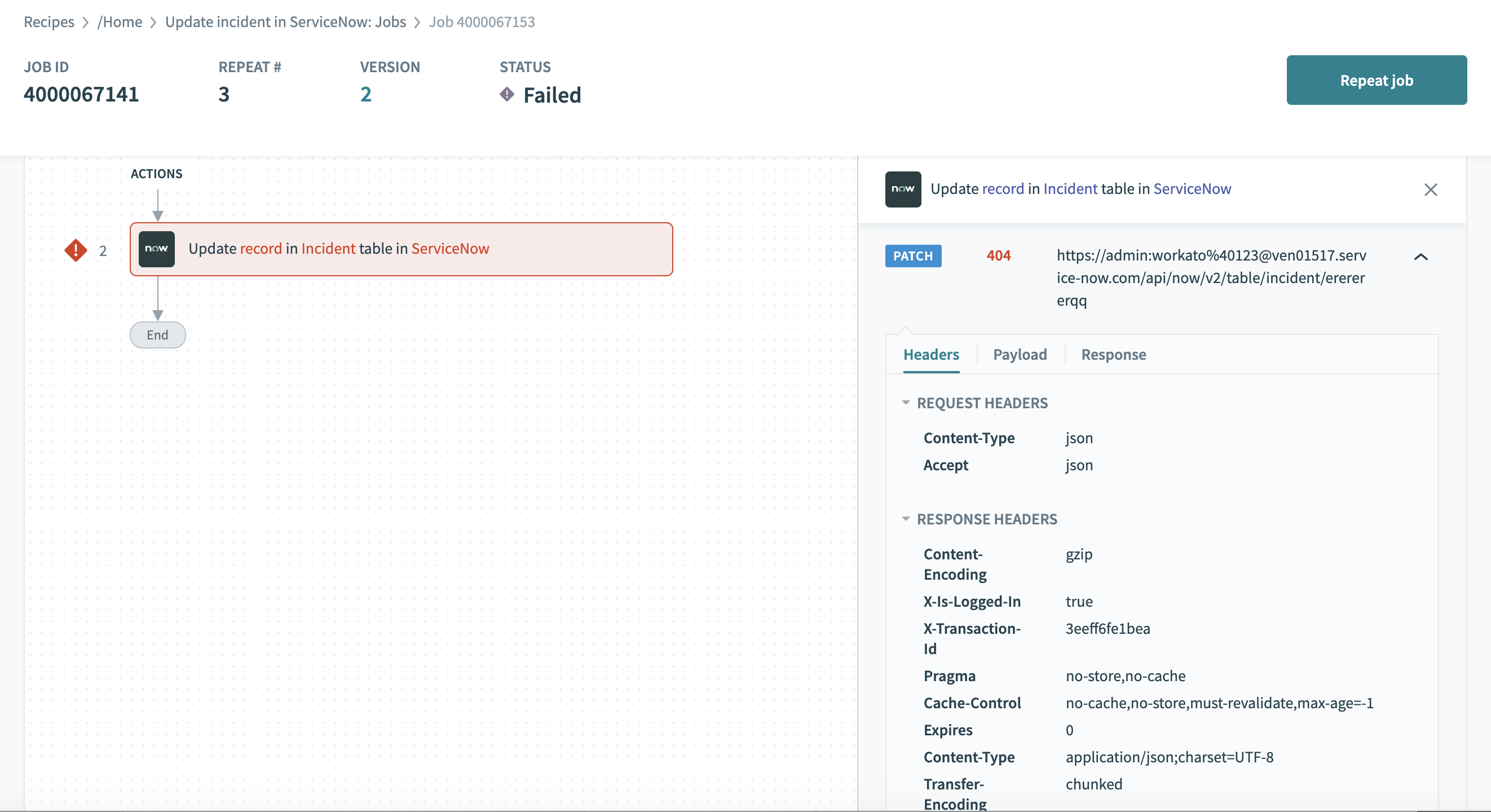 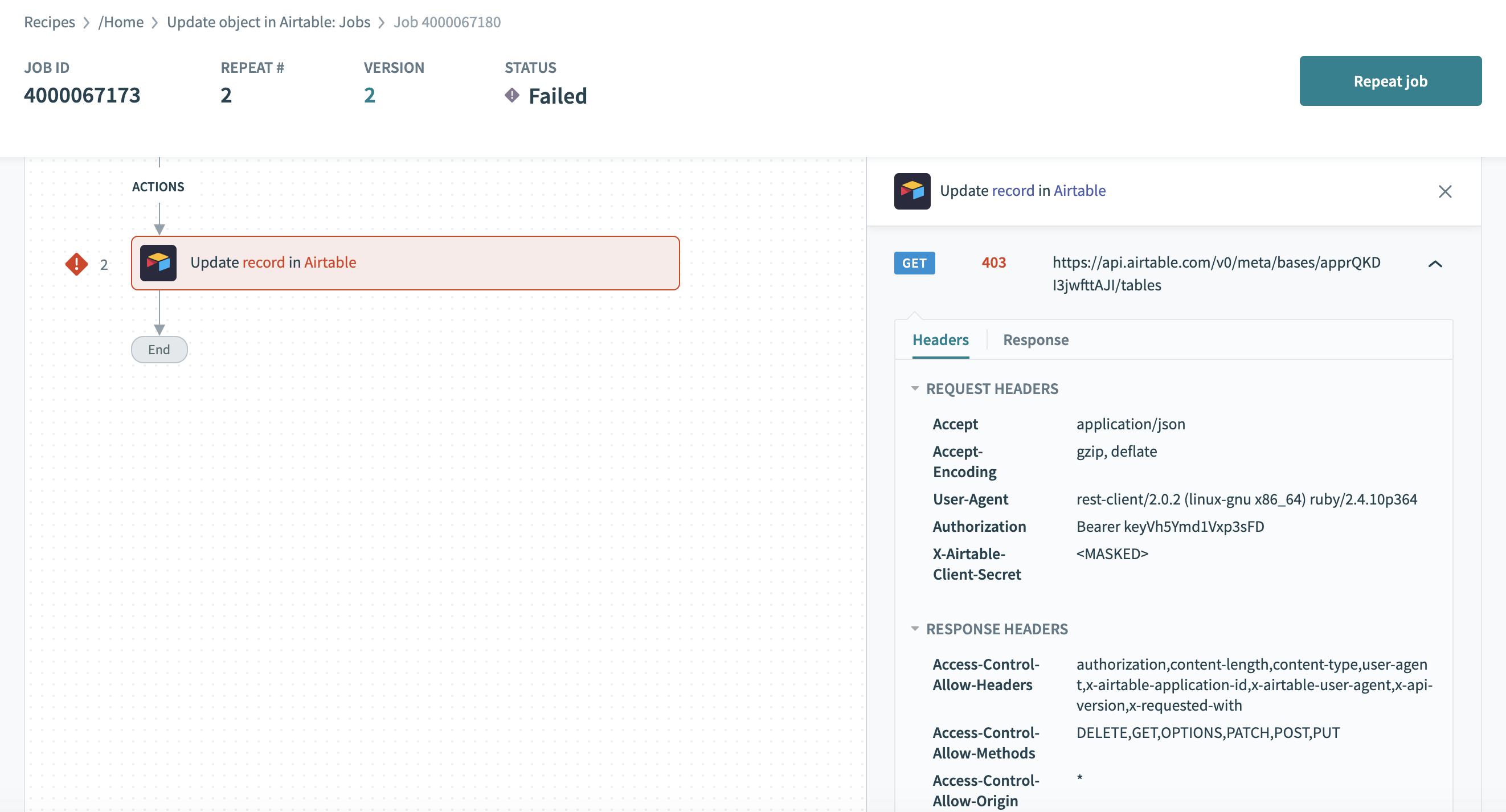 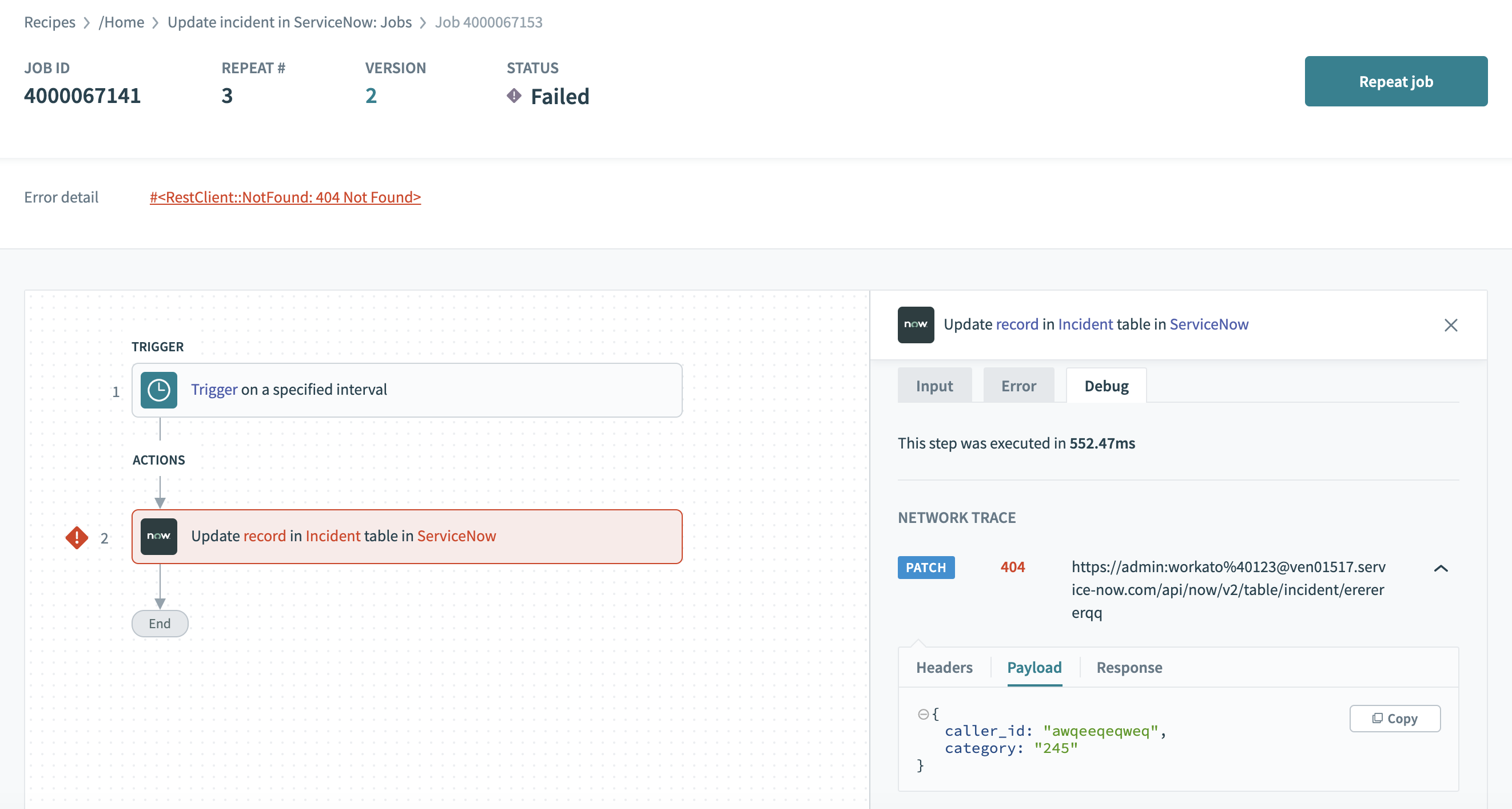 To see the response returned by the HTTP request, select Response tab. 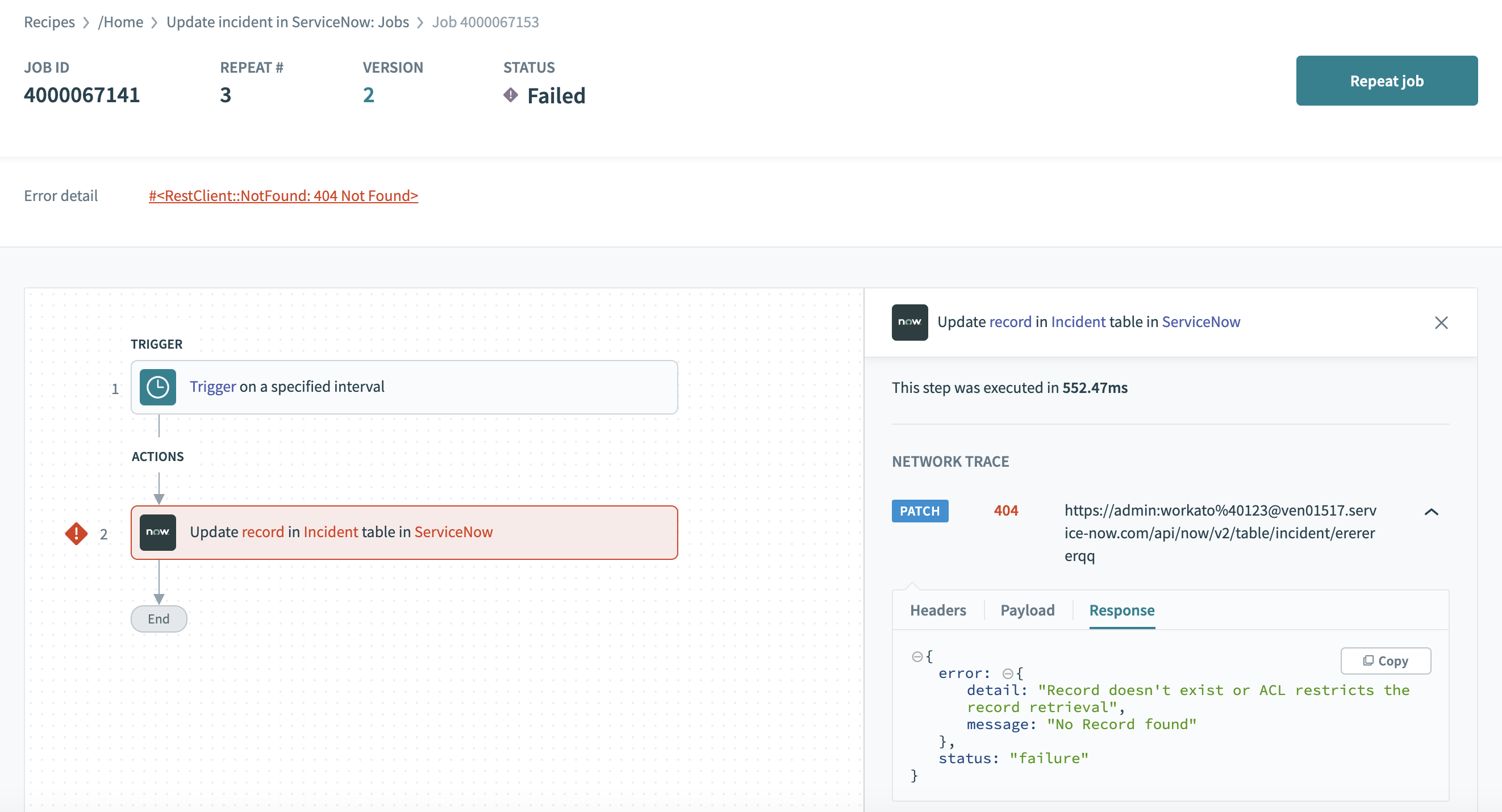 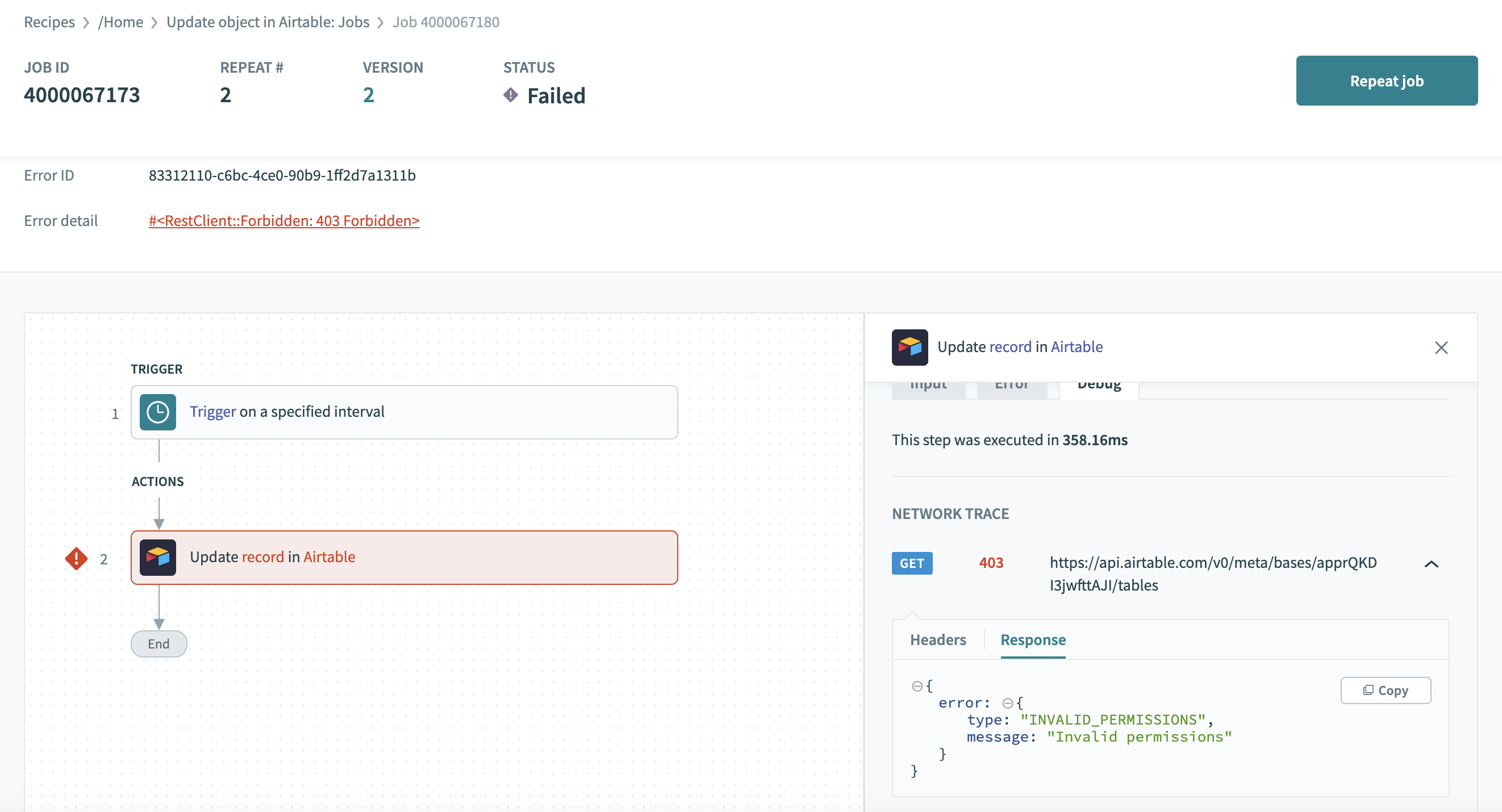 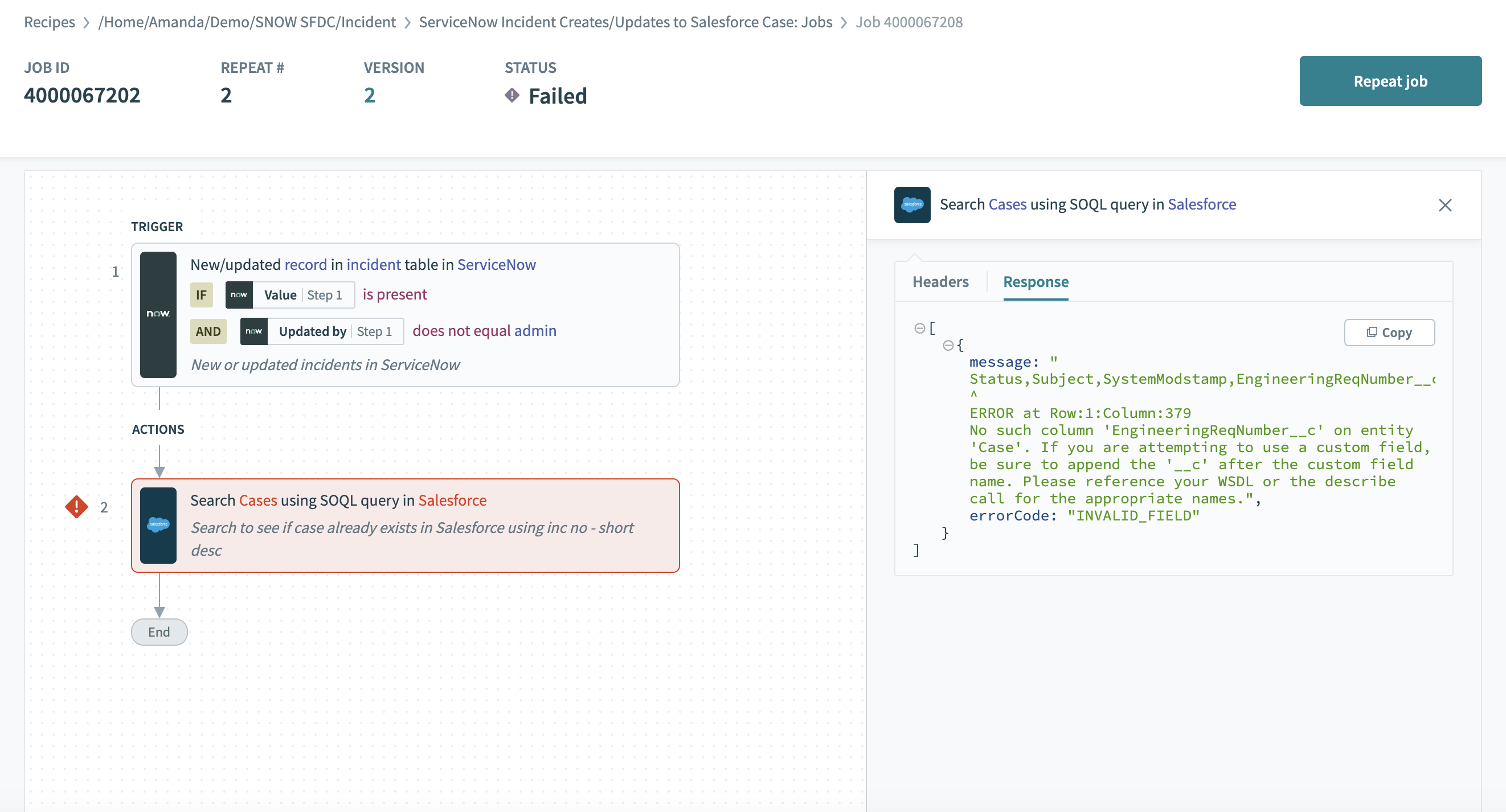 How long is the tracing data available for?

Tracing data is available for 1 day from the time it was generated by repeating a job. If you want to access the data after 1 day, you can repeat the job to generate the debug tracing.