Recipe Design
After you create your recipe

There are many different ways of building recipes and some strategies can be adopted to handle task usage. The document below suggests a few strategies customers can adopt if they want to adjust their task usage and which strategy they can implement is up to their business use cases.

The considerable practices in this article are summarized to the following, which recipe developers can review while building recipes ;

To know how often a recipe needs to be triggered depends on the business use case. Some recipes simply have to run in real-time for critical updates, others that sync data for storage and other purposes may not have this requirement. In these instances, it is possible to reduce the number of jobs and hence, tasks processed, by configuring the polling interval.

A recipe’s default polling interval occurs every 5 minutes. Most Workato triggers are poll-based triggers. This means that it checks the trigger application for the trigger events it is monitoring at regular intervals of 5 minutes.

To adjust trigger frequency, a customer can use the Trigger Poll Interval field. It is available as an optional configuration in the trigger setup. This field allows a customer to either choose from a set of options, for example, every 6 hours / 1 day / 30 days, or define their own poll interval in minutes. 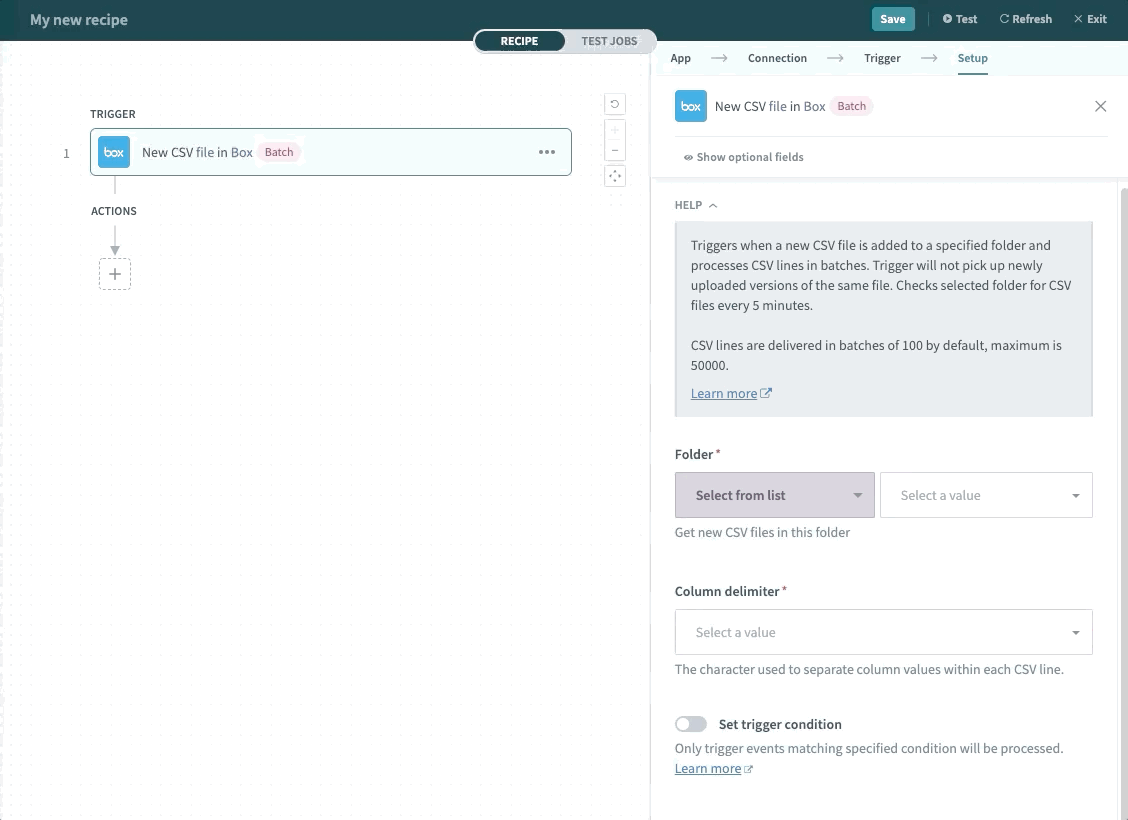 From modifying the polling interval, a customer can manage the number of times the recipe has to process each step and improve task usage. This strategy can be used in conjunction with batch or bulk triggers and actions.

Similar to customizing polling frequency as described above, using the Scheduler by Workato or other scheduled batch triggers to schedule jobs can be adopted to adjust the number of jobs that have to be processed in a certain time period.

Using a scheduled trigger (eg. run once a day, run every hour) as opposed to using regular polls every 5 minutes to check for new events will help to manage the number of jobs required to process the same number of records in larger batches.

# Use batch/bulk triggers and actions

Batch and bulk triggers and actions are available on all connectors that support these operations via API. Since these triggers and actions can process hundreds to millions of records with a single action, using them, as opposed to single record operations, can substantially help to manage task usage in a job.

Instead of processing 1 record (1 task) at a time, you can process 100 record batches (counts as 1 task). This would reduce task usage by a factor of 100. 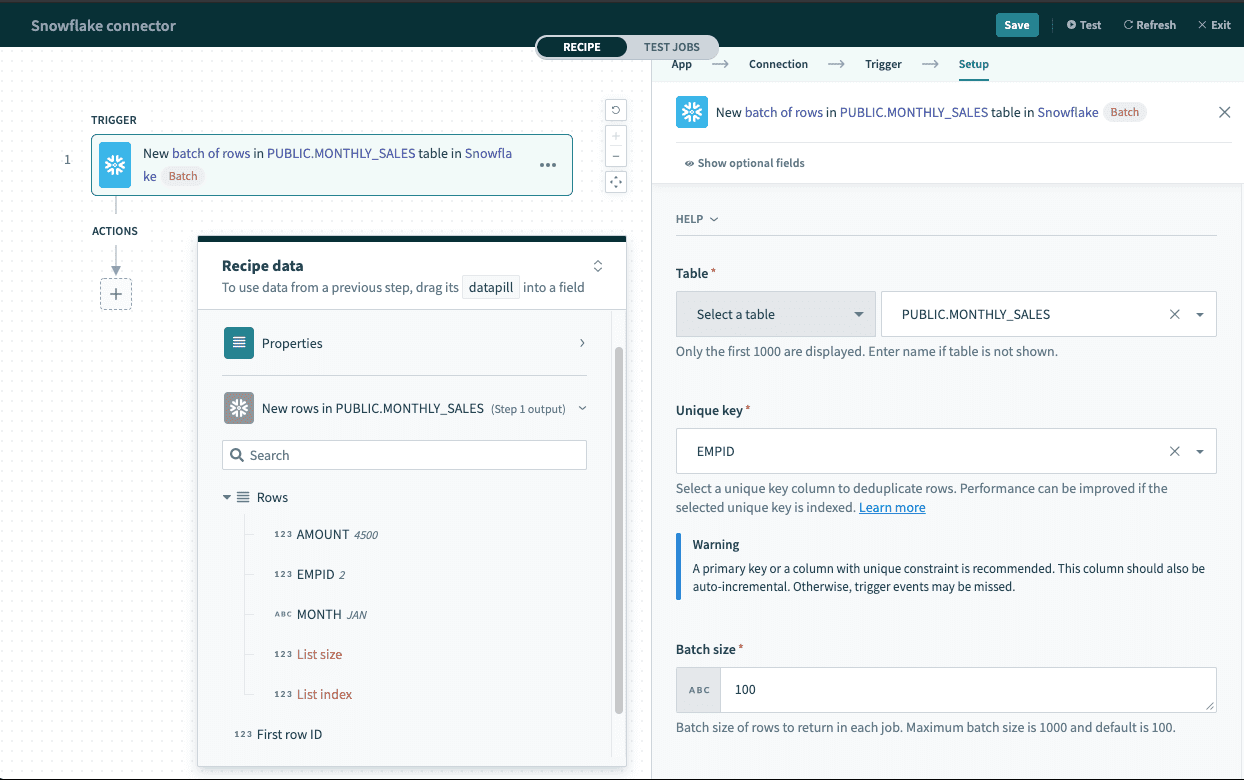 Most batch and bulk triggers allow the specification of a batch size (eg. process 100 records in a batch), which usually translates to the number of records processed in a single job. Using larger batch sizes will help cut down the number of jobs and correspondingly, the number of tasks.

Streaming is the concept of reading and writing a file in smaller parts (chunks) in sequence. This allows Workato to transfer large files between apps or file systems without worrying about hitting the size limit of the sending and receiving systems. A common example is transferring records from a shared file system (SFTP) to a file hosting platform for analysis (Amazon S3).

Streaming actions allow a single action to process large amounts of data without the need to break it up into multiple jobs for processing. Note that both the download source and upload destination actions have to support streaming. 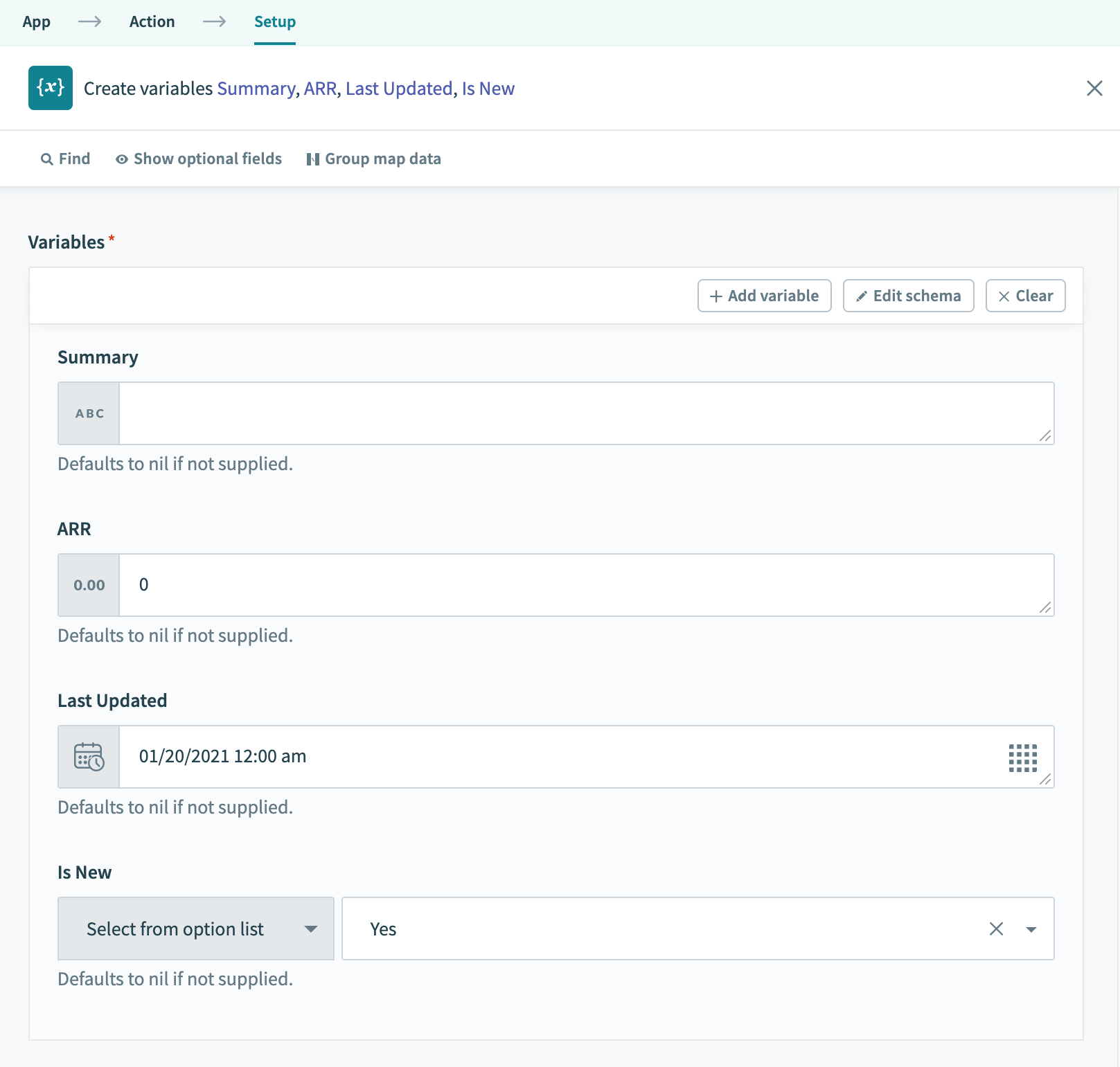 The ability to declare multiple variables in a single step was added in Spring 2021. Workato recommends all admins to revisit existing recipes where many variables are created to consolidate them into a single step if possible.

← Reruning Jobs
Learn About Tasks →
On this page