Triggers determine what event to listen to execute the actions described in a recipe.

Trigger events can be set off in apps (such as Salesforce or Jira) when a certain event happens (new contact is created or existing ticket is updated), when a new line is added in a file, or according to a schedule (fires at a certain time or interval).

Depending on the available API, Workato can receive trigger events in real-time, or check for the occurrence of an event periodically by polling the app. 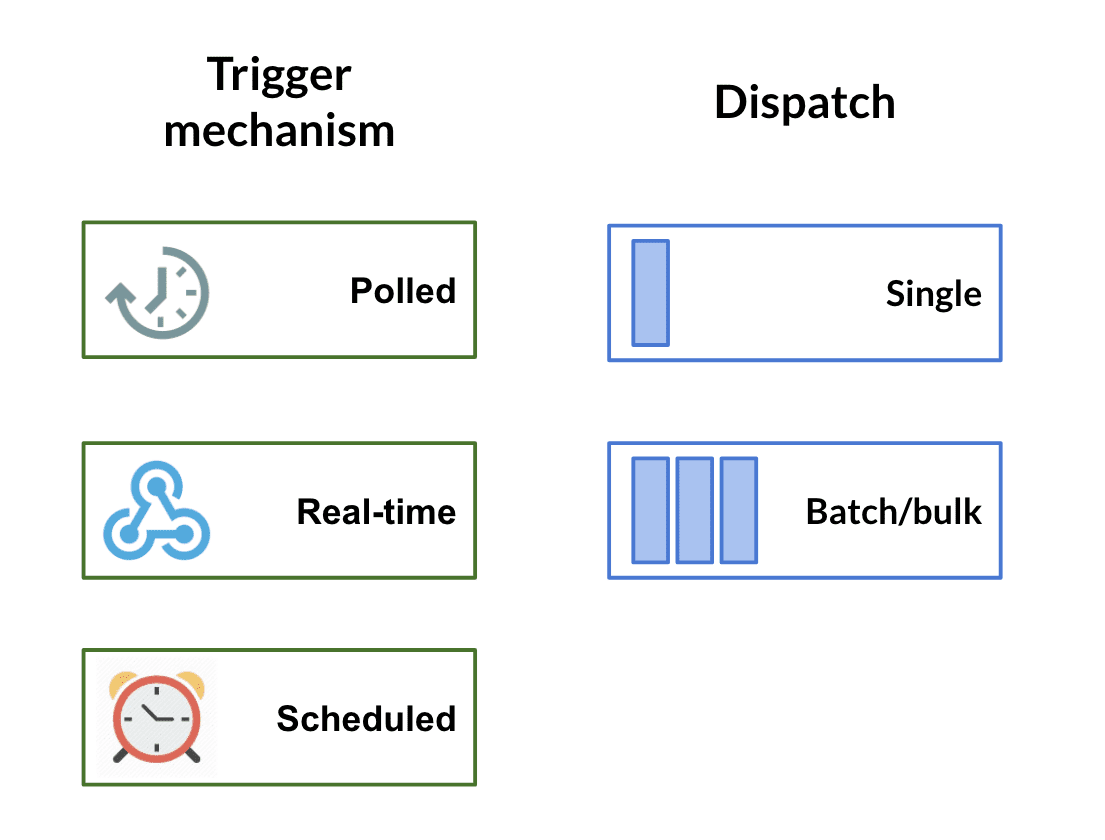 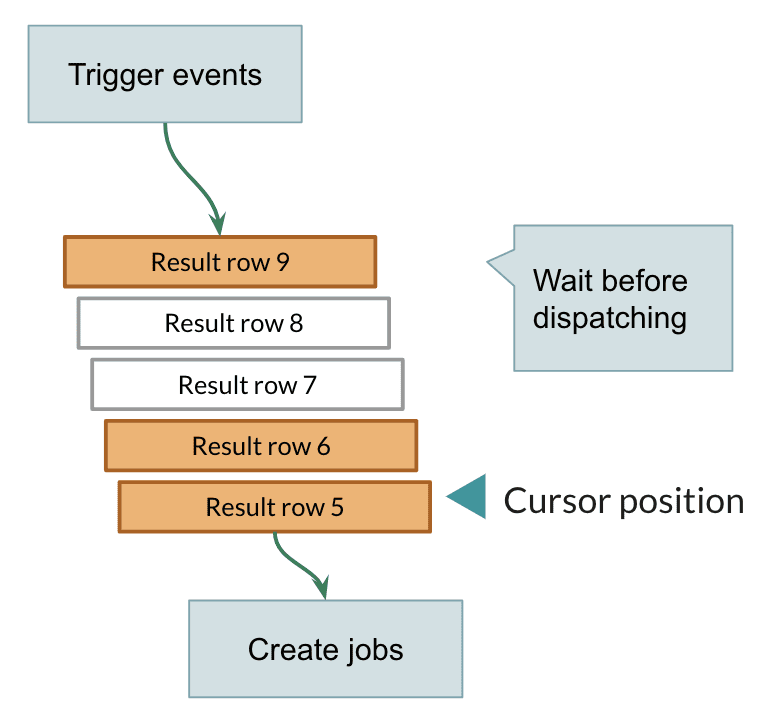 Trigger events are queued and processed by the recipe as jobs

Workato triggers have the following behaviour.

Triggers will be delivered in chronological order, for example, oldest records will be processed first, or in the sequence they were delivered to Workato.

Recipes remember the jobs it has processed even across stopped and running states. Whenever a recipe is started, it will pick up where it stopped and begin processing all trigger events since it was stopped.

Each recipe maintains a record of the trigger events it has seen, and will not process duplicate events.

Recipes process trigger events synchronously, for example, only process a second job when the first job has been completed. For moving large volumes of data, you can maximize data throughput with batch processing and running multiple concurrent jobs. Learn more about Workato's recipe concurrency.

For Workato polling triggers, Workato guarantees trigger event delivery. Even if servers experience temporary downtime, or if the network is unstable, Workato ensures that triggers are picked up and processed in-sequence.

Webhook events, which powers most real-time Workato triggers, inherently have the possibility of being lost. To mitigate this, most Workato-built real-time triggers (a notable exception is the HTTP webhook trigger) have a backup polling mechanism that ensures missed webhook trigger events will be picked up.

Trigger mechanisms determine when a trigger will fire. In this section, we cover polling triggers, real-time triggers and scheduled triggers.

Polling triggers check for new events by periodically querying the app to see if new events are available. The polling frequency is determined by the type of Workato plan, and can be as low as 5 minutes. Each poll may yield multiple events ready for processing i.e. a single poll can result in several jobs being created.

A Workato account on the Business plan has a 5-minute polling interval, as displayed on their polling triggers.

Real-time triggers are usually built on top of an asynchronous notification mechanism. Real-time triggers typically require registration in your connected app (either via the API or manually via the app interface), to let the app know that you are interested in a specific event. When that event occurs, the app will send a notification to Workato and generate a trigger event.

Webhooks are one such mechanism. Most real-time triggers supported on Workato are built on webhooks. The advantage of webhooks is that there is no delay, and it is more efficient as we only receive notifications from apps when events occur, instead of Workato having to check at regular intervals for new events. 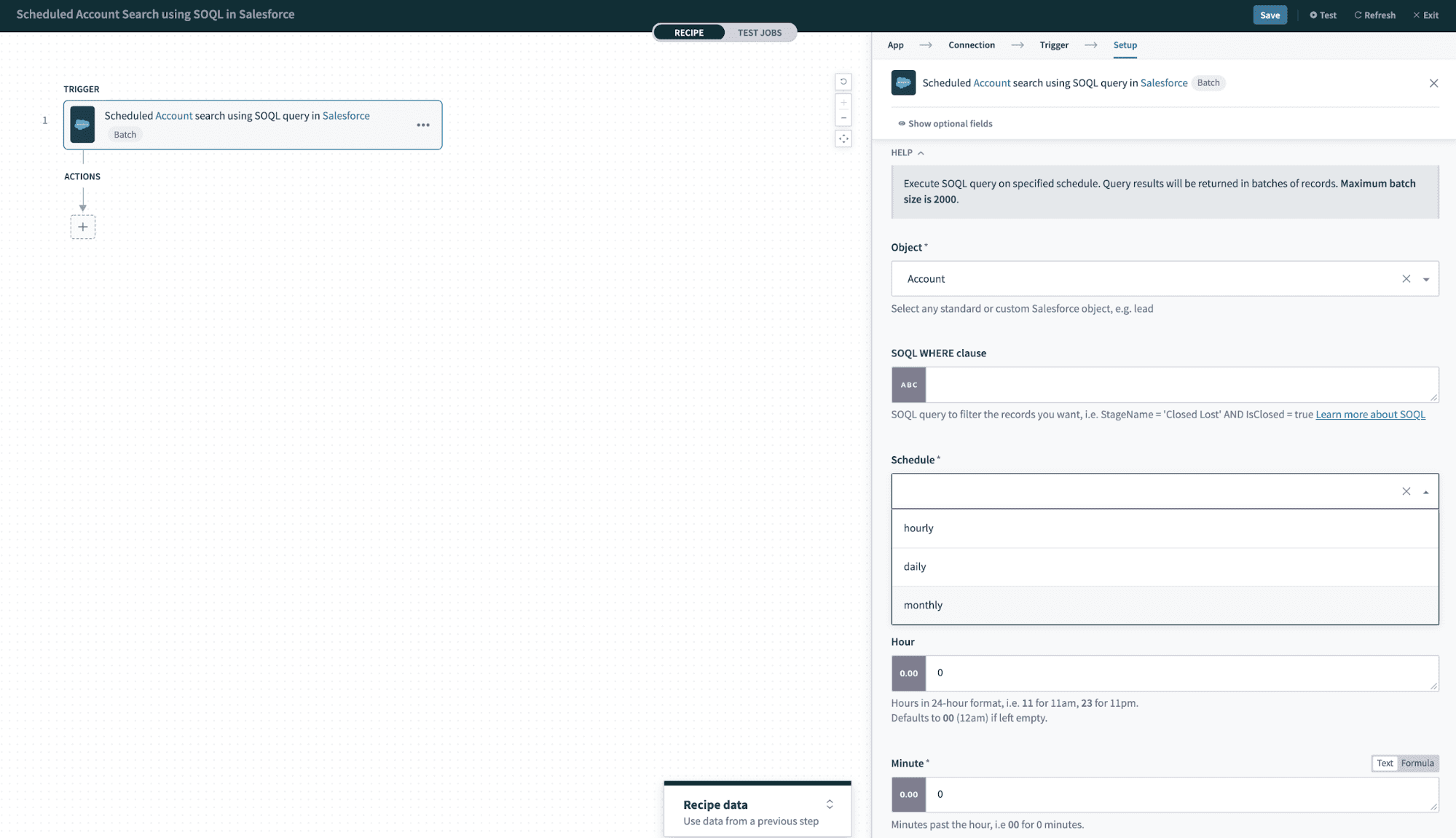 At the scheduled time or interval, this trigger will fetch all events matching the specified criteria. Also, unlike other triggers, scheduled triggers will return events that have already been picked up previously.

Scheduled triggers will return events in batches, similar to how batch triggers work. Users can specify the maximum batch size, for example, if the batch size is set to 100 and 420 new events are identified, 5 new jobs will be created. The first four jobs will have 100 events each and the fifth will have 20 jobs.

Scheduler triggers allows you to schedule when exactly your recipe will run. There are two triggers: 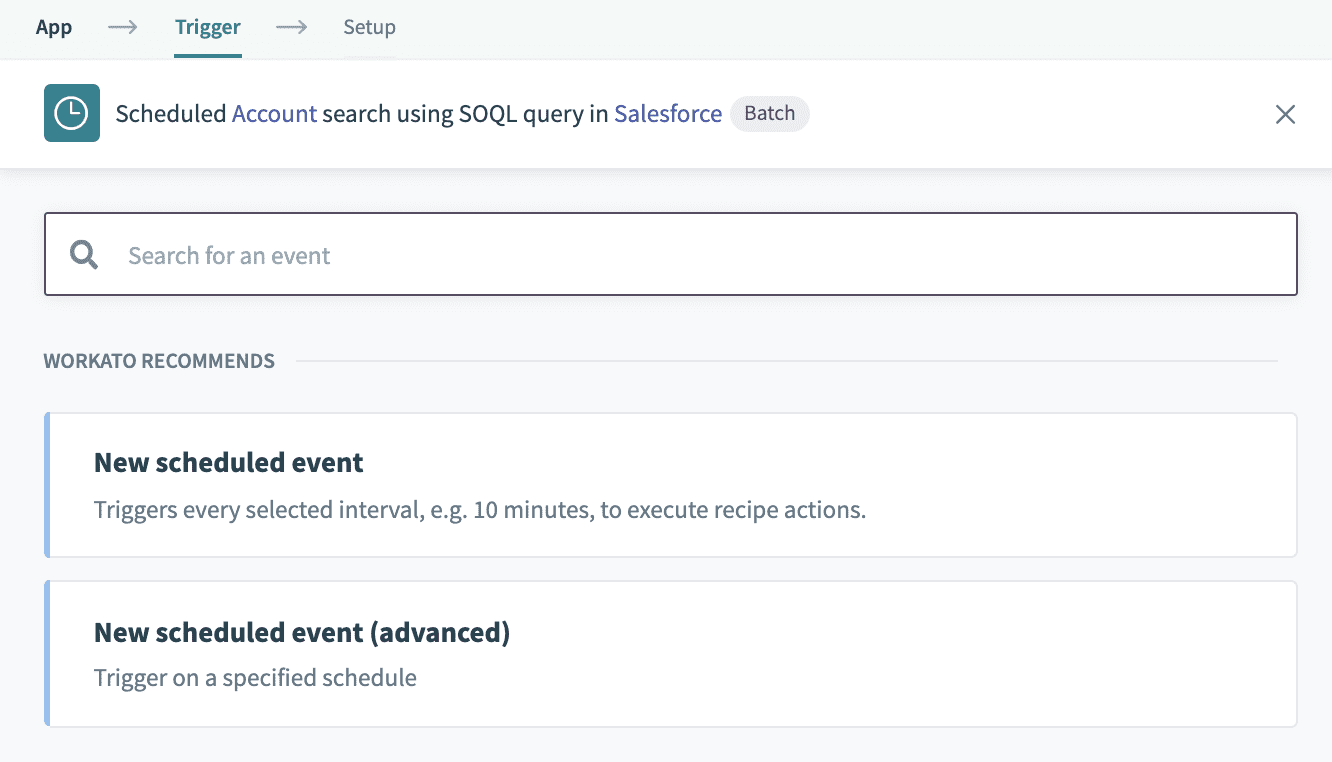 This trigger allows you to specify the time the recipe should first trigger, and subsequently, the time intervals to continue triggering on. 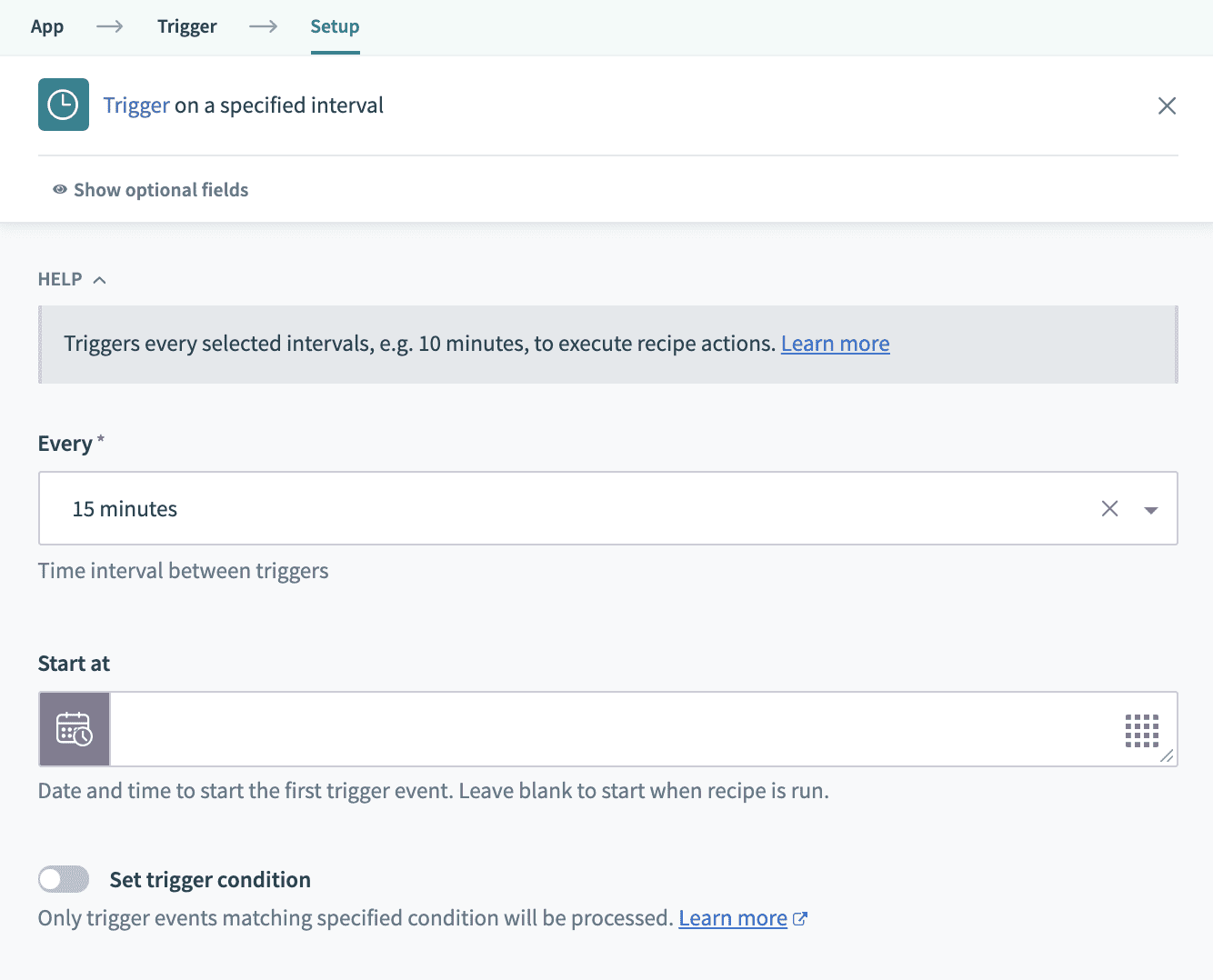 Basic scheduler trigger that triggers the first time when recipe is started, then subsequently every hour after that 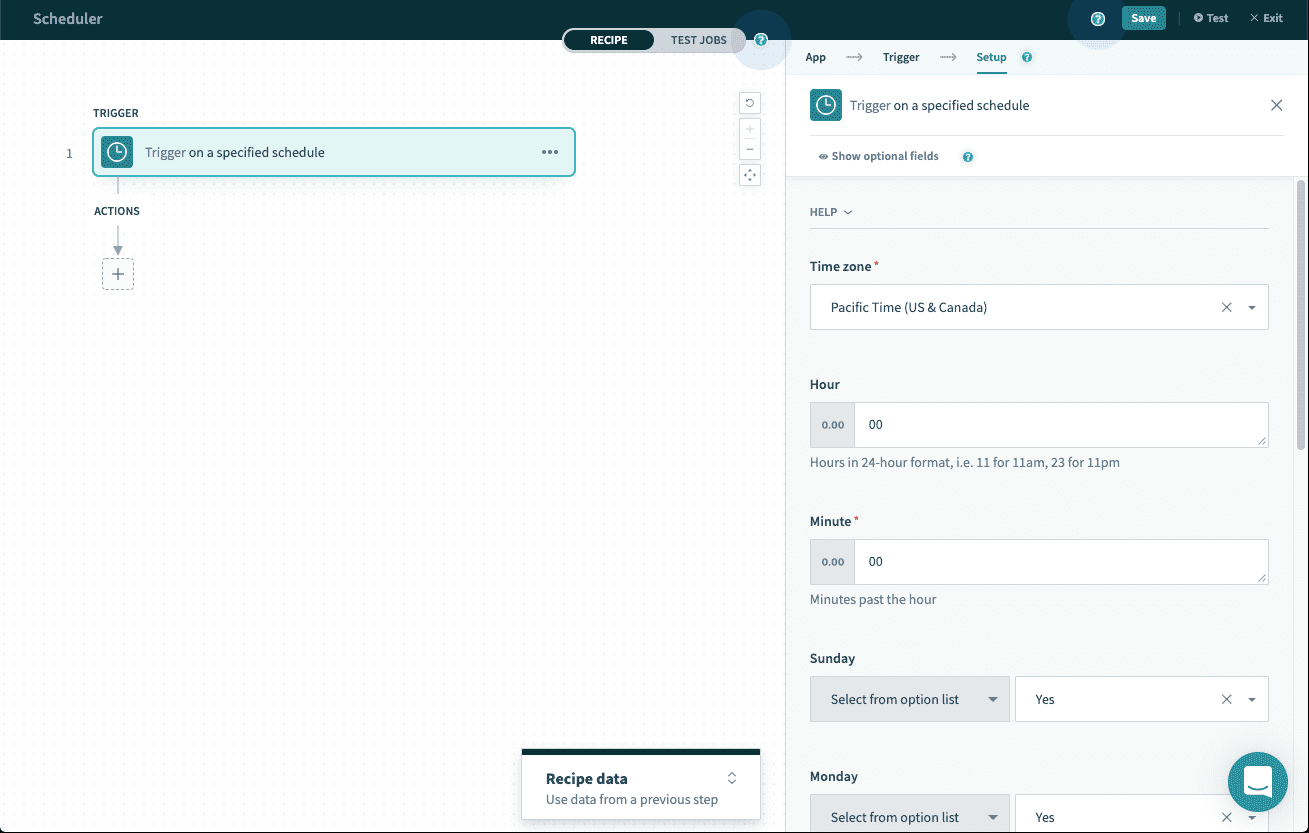 Advanced scheduler trigger that triggers every Sunday at midnight 0000

Trigger dispatches determine whether a trigger returns a single event or a list of events. In this section, we cover single triggers and batch triggers.

Batch triggers are generally used for increasing throughput, as trigger events are retrieved in lists instead of single events, for example, moving high volume of user activity data from Marketo into data warehouses like Redshift.

Batch triggers are similar to polling triggers in terms of how they fetch new events. This group size i.e. batch size can be specified by the end user as part of the trigger configuration. 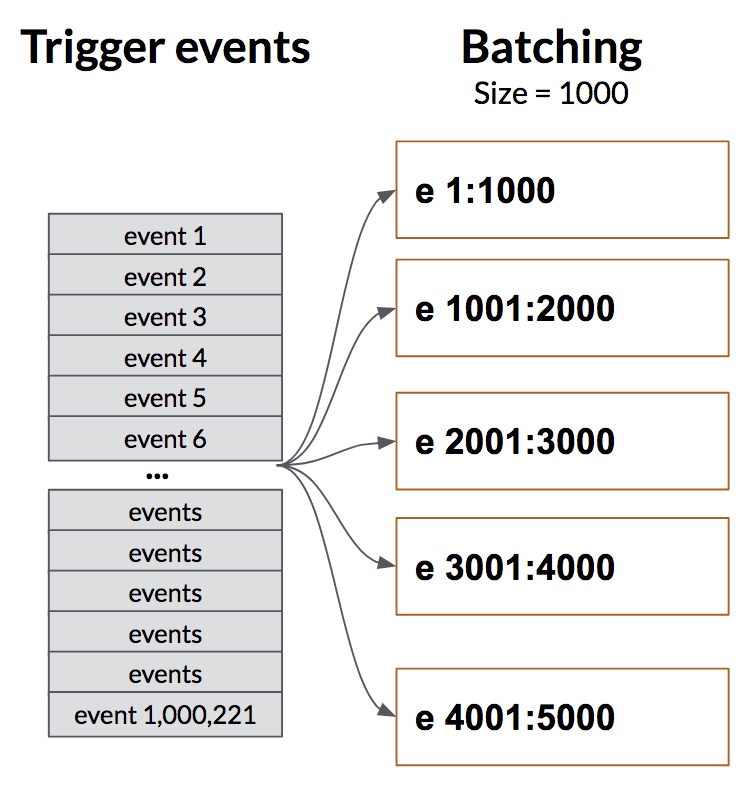 For further details about batch triggers, refer to the Batch processing article here.

The Since or From setting enables recipes to fetch past trigger events from a specified date and time - instead of picking up new trigger events (events created since recipe was started) this enables picking events that have already occurred.

In the example below, the New Salesforce object trigger has a From date as 1 Jan 2017, midnight PST and the 'accounts' object is selected. 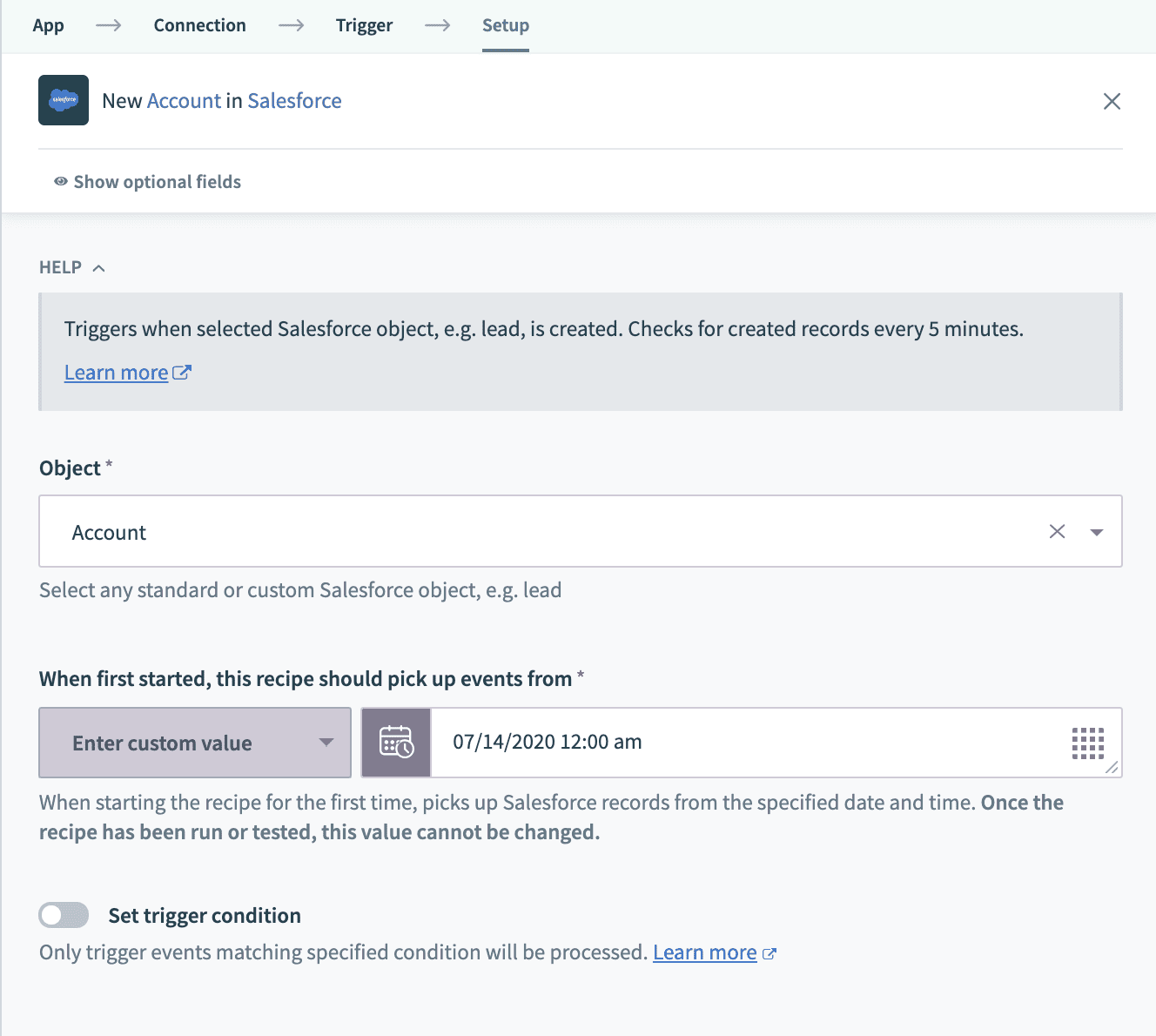 Setting the Since date for the trigger. Trigger will only pick up new accounts created since midnight of Jan 1, 2017

When the recipe is started, only Salesforce accounts created after 1 Jan 2017, midnight PST will be picked up, as viewed from the created date column on the job report.

Job report shows that only Salesforce accounts created after Jan 1, 2017 were processed

If the trigger was New/updated Salesforce object, only Salesforce accounts created or updated after 1 Jan 2017, midnight PST will be picked up.

However, not all triggers have the Since/From parameter. For such triggers, the date and time from which trigger events will be fetched is predetermined by default, usually as an offset from the time the recipe is started. Common values are: 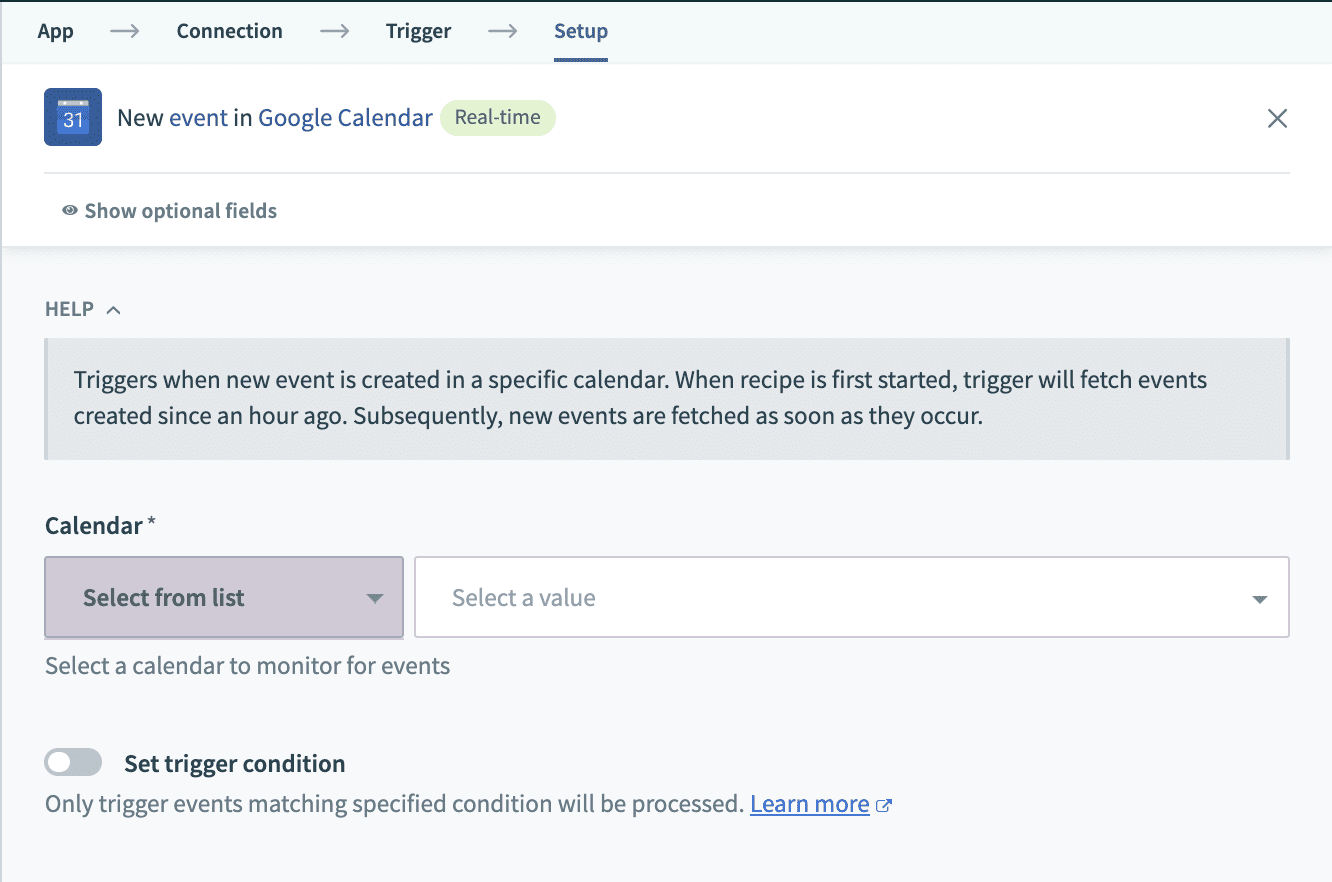 The Since/From value can only be set once, and will be locked from further changing after the recipe has been started for the first time.

Trigger conditions are additional rules that define what kind of trigger events should be selected for processing, for example, you can specify that only Salesforce accounts from California must be processed.

Trigger conditions are evaluated by Workato after the trigger events have been fetched i.e. Workato retrieves all new Salesforce accounts created in the last 5 minutes, and then filters out accounts not from California. This also means that, with a New Salesforce account trigger, accounts which are subsequently updated to be from California will not be picked up. If you find that your recipe seems to be missing events that you expected to be picked up, this might be the issue. 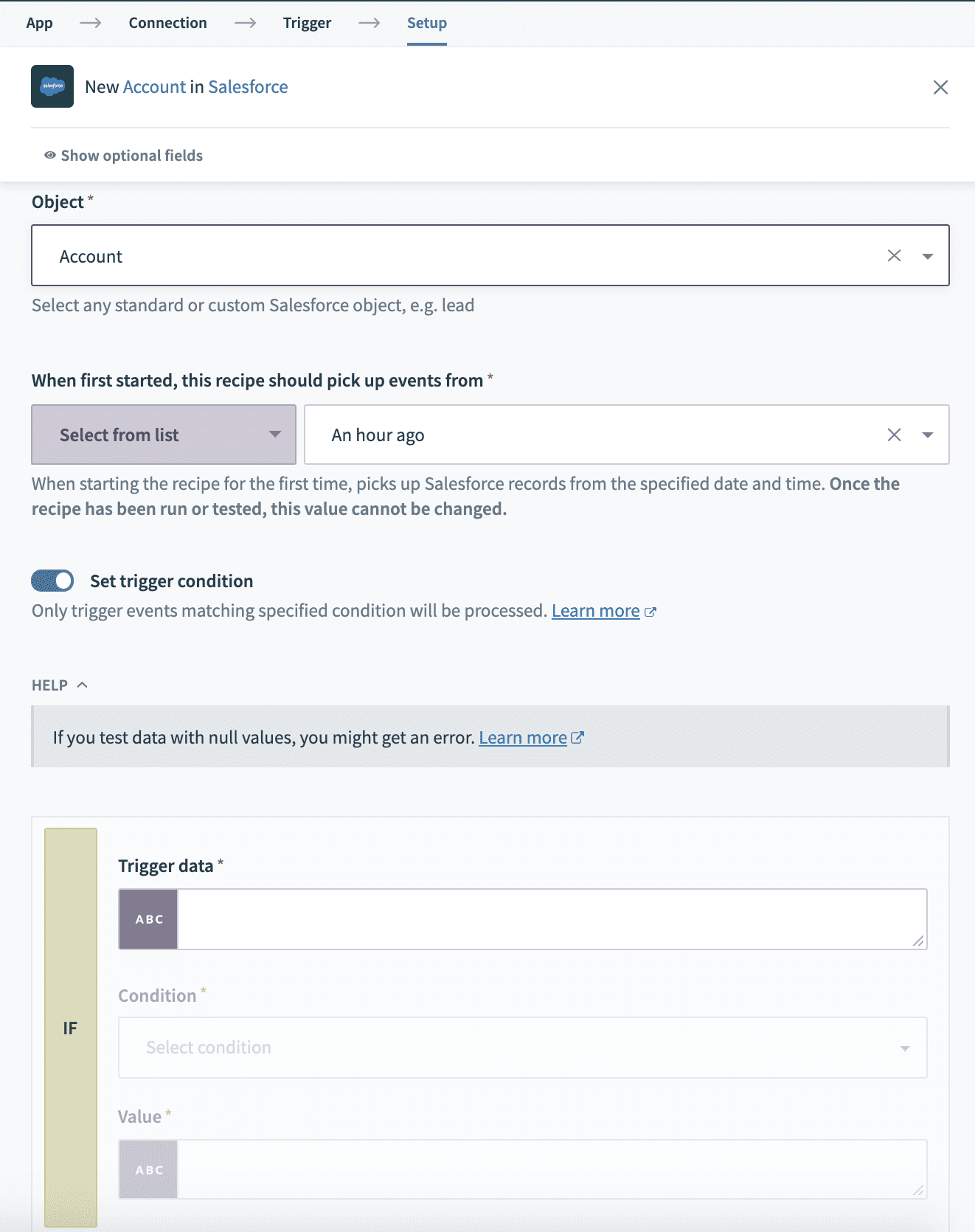 Define the trigger condition. For more information on the available conditions you can use, refer to the IF condition article. The following ensures that only Salesforce accounts with a Warm rating value will be picked up by the trigger. Values are case sensitive and should be exact. 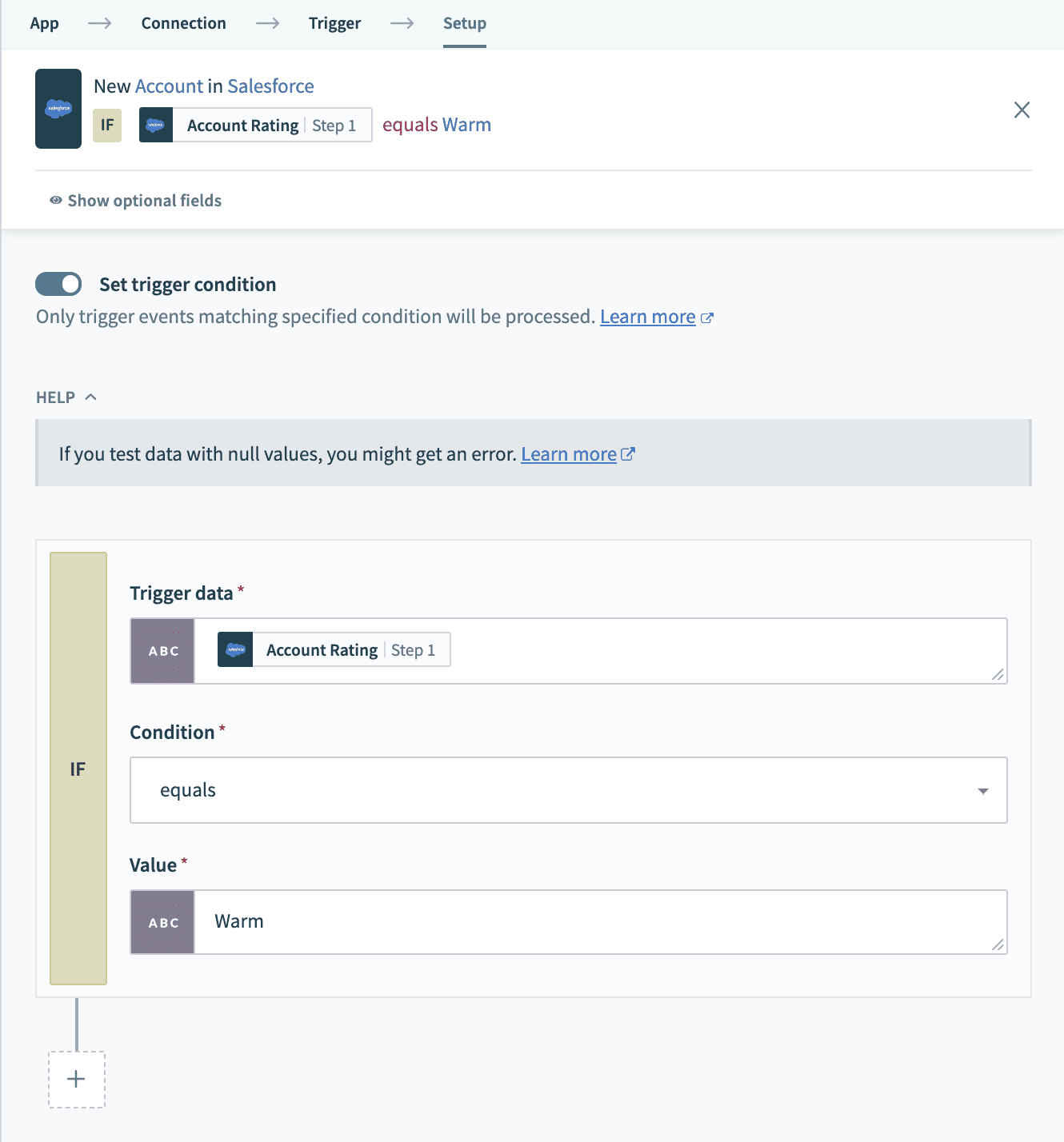 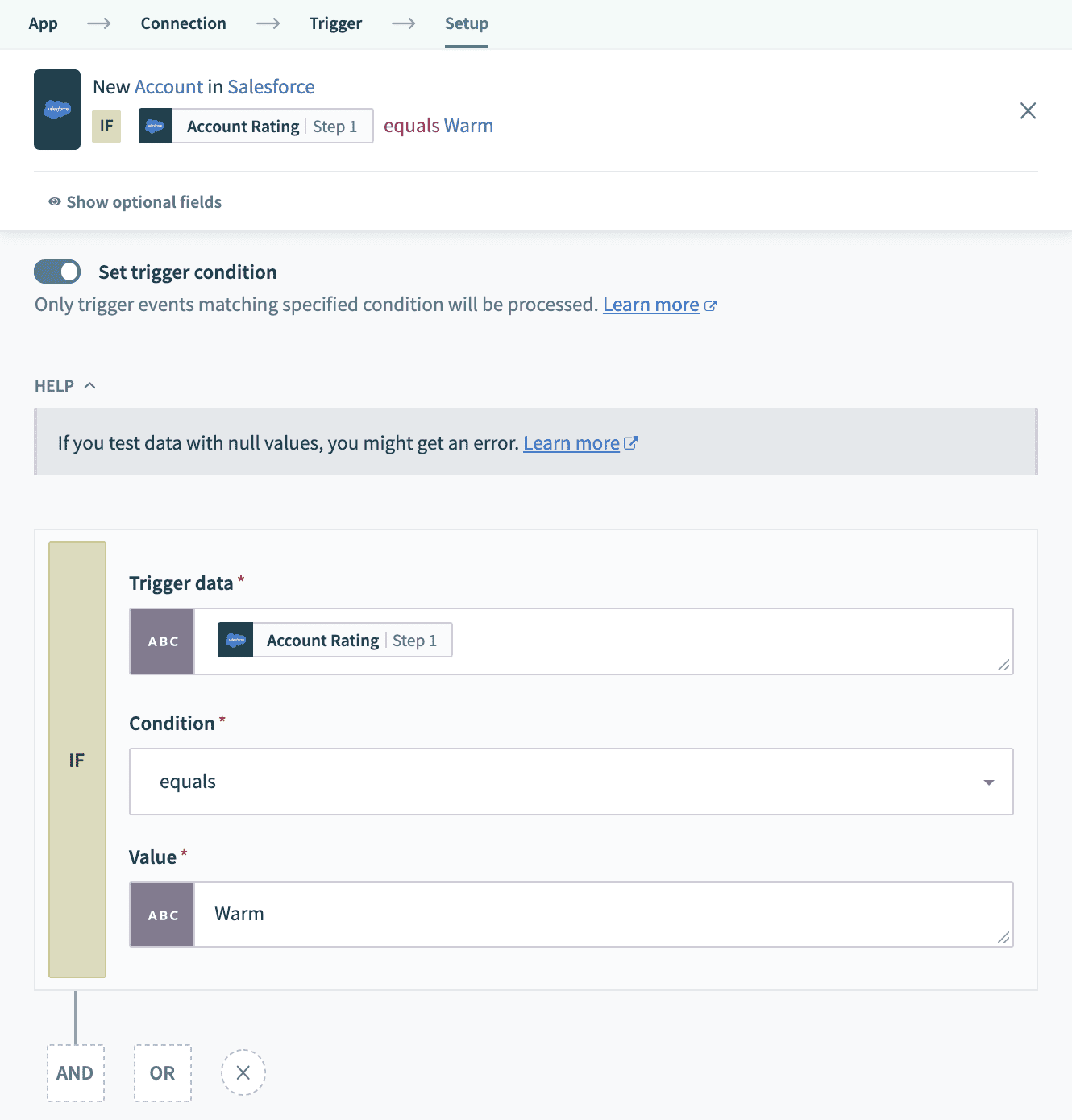 Adding another trigger condition with the OR operator

Define the additional trigger condition. Values are case sensitive and should be exact. The following ensures that accounts with a Hot rating value will also be picked up by the trigger. Notice that from the third trigger condition onwards, trigger conditions will be combined with the previously selected operator (OR or AND). 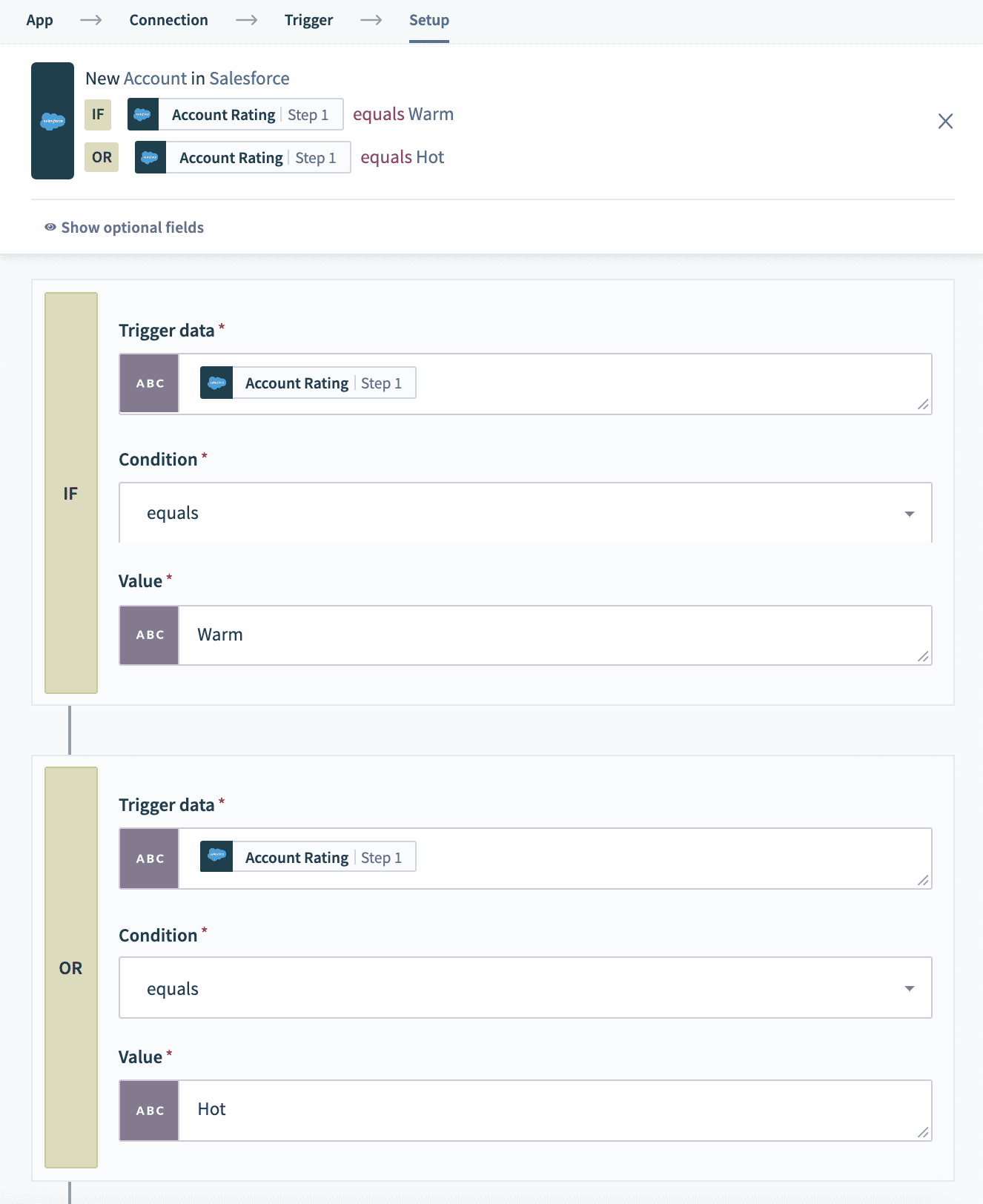 ← Errors
Steps →
On this page