Slack (opens new window) is a team collaboration platform that consolidates your team's communication and resources.

Workato allows you to connect Slack with the enterprise and productivity apps used across your organization. Transform your team's conversations into automated tasks in those apps - all without leaving your Slack workspace.

If you're a Slack administrator (or part of an administrative team) that needs to automate workflows on a workspace-level, then the Slack connector is what you need. Using the Slack connector, you can subscribe to workspace-level events and manage channels, groups, and more. For example, you can automate the creation, naming, purpose, and invitees of private Slack channels (typically between members from Customer Success and customers), triggered by a ticket escalation in Jira.

If you envision a virtual assistant for your team that can perform complex tasks like approval workflows involving several steps, displaying dynamic menus & interactive elements, go for Workbot.

Workato connects to both Slack for Teams (for single workspaces) and Slack Enterprise Grid (for multiple workspaces).

# How to connect to Slack on Workato

Authorize Workato to access your Slack organization via the OAuth 2.0 standard. This will require you to log in to Slack and authorize the permissions that Workato requests.

Setting up the Slack connection

# Working with the Slack connector

The Post message action can be used to post a message to a channel or a direct message to a Slack user. By default, the message will be posted as the authenticated user.

The following shows an example of how the different fields show up in Slack. As the Post message as and Icon image URL input fields have not been configured, the message displays as being posted by the Workato app. 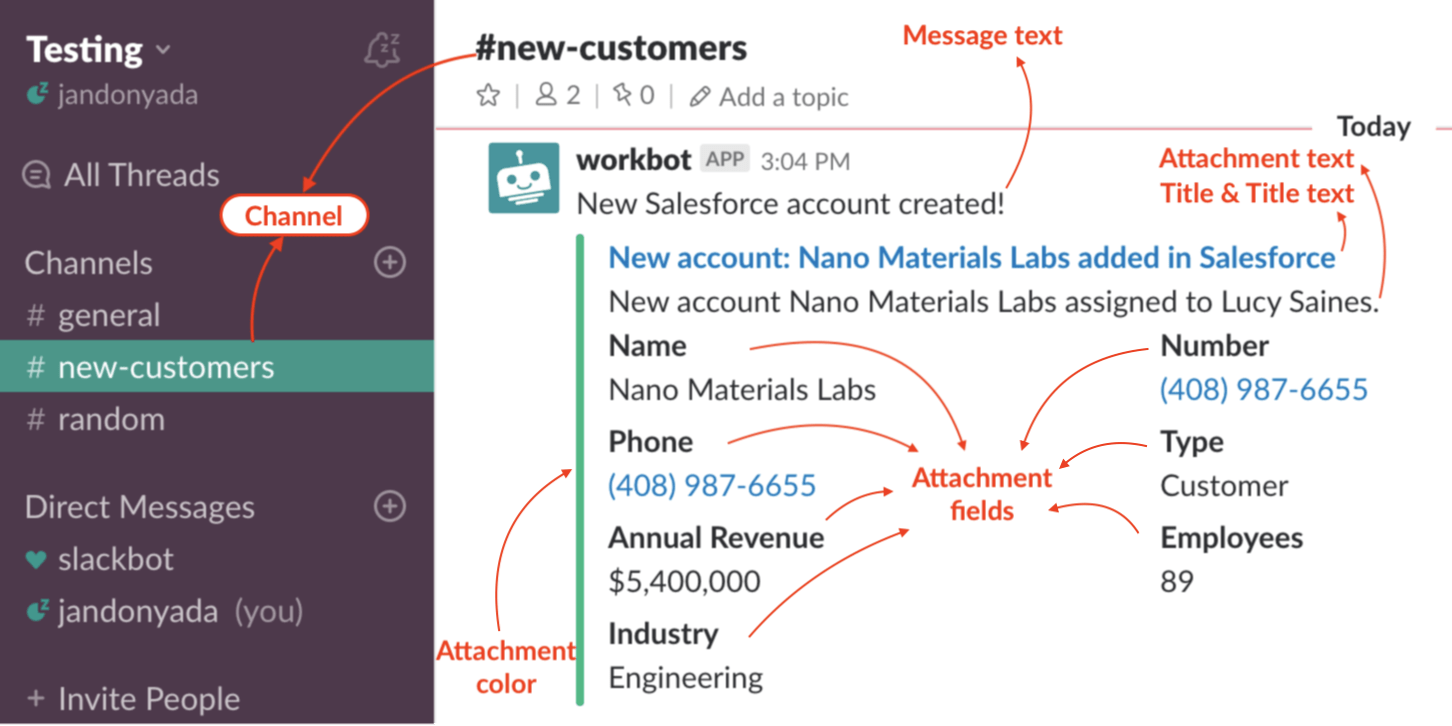 Basic example of the post message action with attachment

The corresponding configuration of the action step can be seen below. Also, the Message type has been configured to Good. 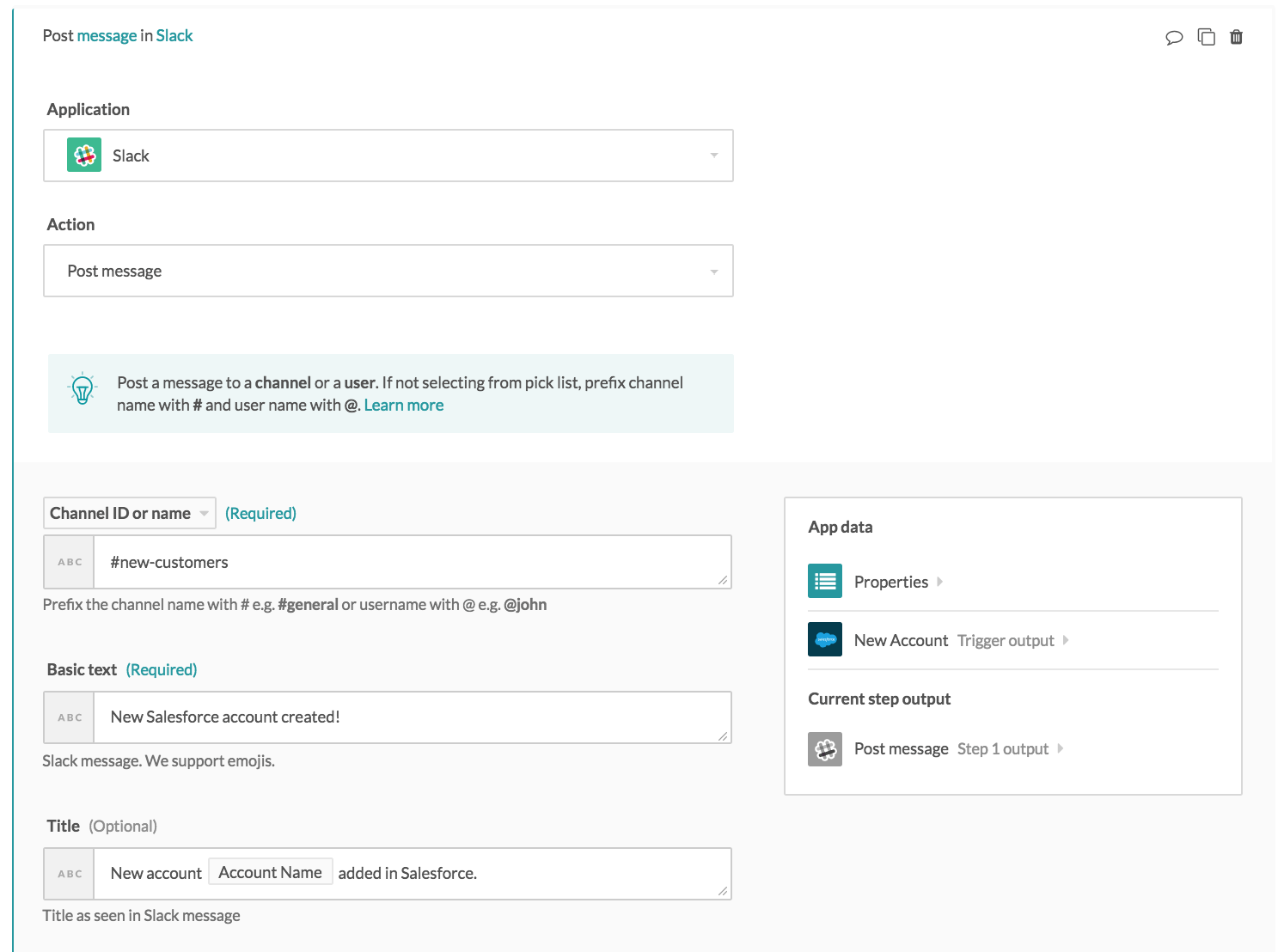 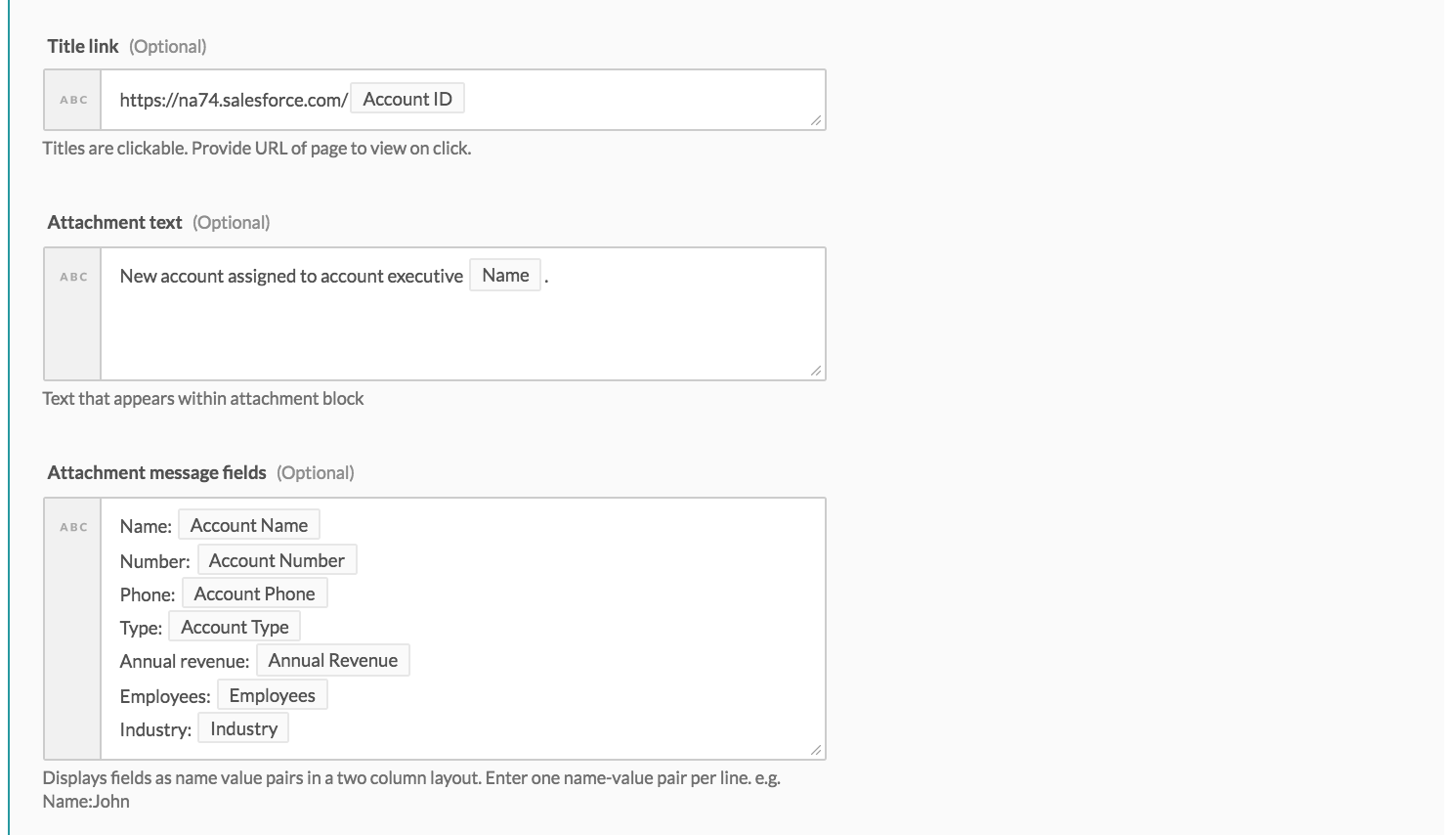 There are 2 ways we can build interactive Slack buttons recipes, either via IF conditions, or via the Slack action Respond to button.

Possible use cases for building your recipe via IF conditional recipe steps would be scenarios whereby you're okay with multiple clicks of the buttons, such as team polls.

# Example recipe #1A: recipe with a post message action with buttons configured

The buttons configured in this recipe show up in Slack as follows.

Corresponding buttons generated from the above configuration

There are two available styles for buttons - non-danger and danger style. The non-danger styled buttons, once clicked, records the button click immediately and triggers the second recipe with the New button action trigger.

The danger styled buttons, when clicked, generates a popup prompt that asks the Slack user for confirmation of their click.

The prompt that pops up can be completely configured in the button configuration in the Slack action Post message.

The button configuration for both button styles is in the following screenshot. We're calling a recipe we have pre-built: New Salesforce account button response recipe - Notify BizDev & Notify Sales (opens new window). All recipes with the Slack trigger New button action should show up in this picklist - select the recipe you have built to respond to this particular set of buttons.

The above button configuration follows this format for button actions:

The following is an elaboration on each field in the definition of a button.

# Example recipe 1B: button action handler recipe - recipe with a new button action trigger with IF conditional logic defining the actions to carry out upon each button click

The following recipe has been built for the above scenario. It posts different messages as a thread under the first Salesforce account notification message, depending on which button has been clicked. Using IF conditions is more versatile than using the Slack action Respond to button, because you can carry out multiple steps in the IF condition and in multiple apps.

The following table elaborates upon these datapill variables and what they can be used for.

An example of the values can be viewed in the job output, as follows.

Possible use cases for building your recipe in this way would be scenarios whereby you only wish the button to be clicked once, such as approval workflows, for example, approving leave, approving expenses.

We're going to use almost exactly the same recipe as example recipe #1A, except that we're breaking up the single Slack action Post message into 2 separate Post message actions. The first action will post notification information (in this case, my Salesforce account information), while the second action will only post button data. The recipe we will be using can be found here (opens new window).

The buttons configured in this recipe show up in Slack as follows.

When the button is clicked on, it is immediately replaced by a message notifying either the business development or the sales team.

This is because the input field Replace original? has been marked as true in the Respond to button action configuration. We will cover this action in the following section. This allows us to remove the buttons from the Slack channel once they have been clicked on - to prevent multiple clicks on the buttons. This is also why the first recipe breaks up the notification information and the buttons data into 2 separate actions - we want to replace only the buttons with the new message, and not replace the notification information.

# Example recipe #2B: button action handler recipe - recipe with a new button action trigger with Slack action Respond to button that responds to each button click with a Slack message

The following recipe is an alternative way we can build the interactive scenario on Slack. Similarly, it posts different messages back in the channel depending on which button has been clicked. We use the Slack action Respond to button to immediately post a message back onto the channel.

# Input of the Slack action - respond to button action

The following are the new input fields that the Slack action Respond to button introduces to the usual input fields in the Post message action.

Slack threads (opens new window) allow you to group related messages together, making it easier to follow conversations in Slack channels or groups. To use Slack threads, you can either:

# Example recipe #1: recipe that replies to a message ID and starts a thread

Let us relook at the preceeding example recipe that responds to a button click.

If a Slack user clicks on the Notify BizDev button, we can see that it creates a new thread by posting under the original message, 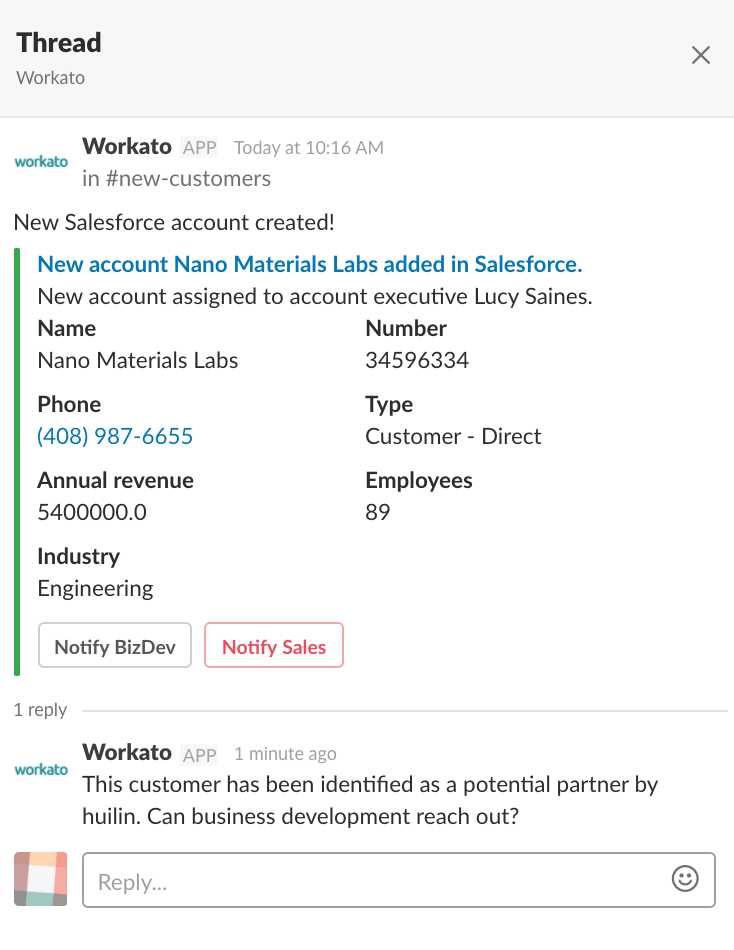 The configuration in the recipe is as follows. We're passing the message ID of the original Slack message into the Thread ID input field. As the message has no thread currently, it will create a new thread.

Correspondingly, if a Slack user clicks on the Notify Sales button, we can see that it creates a new thread by posting under the original message. 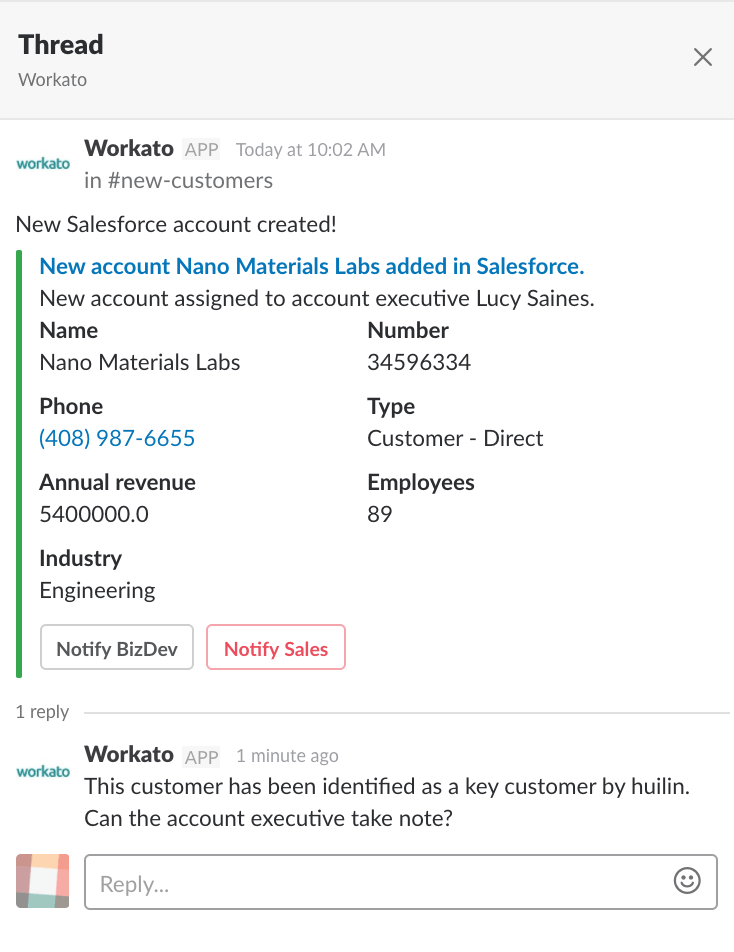 The configuration in the recipe is as follows. We're passing the message ID of the original Slack message into the Thread ID input field. As the message has no thread currently, it will create a new thread. 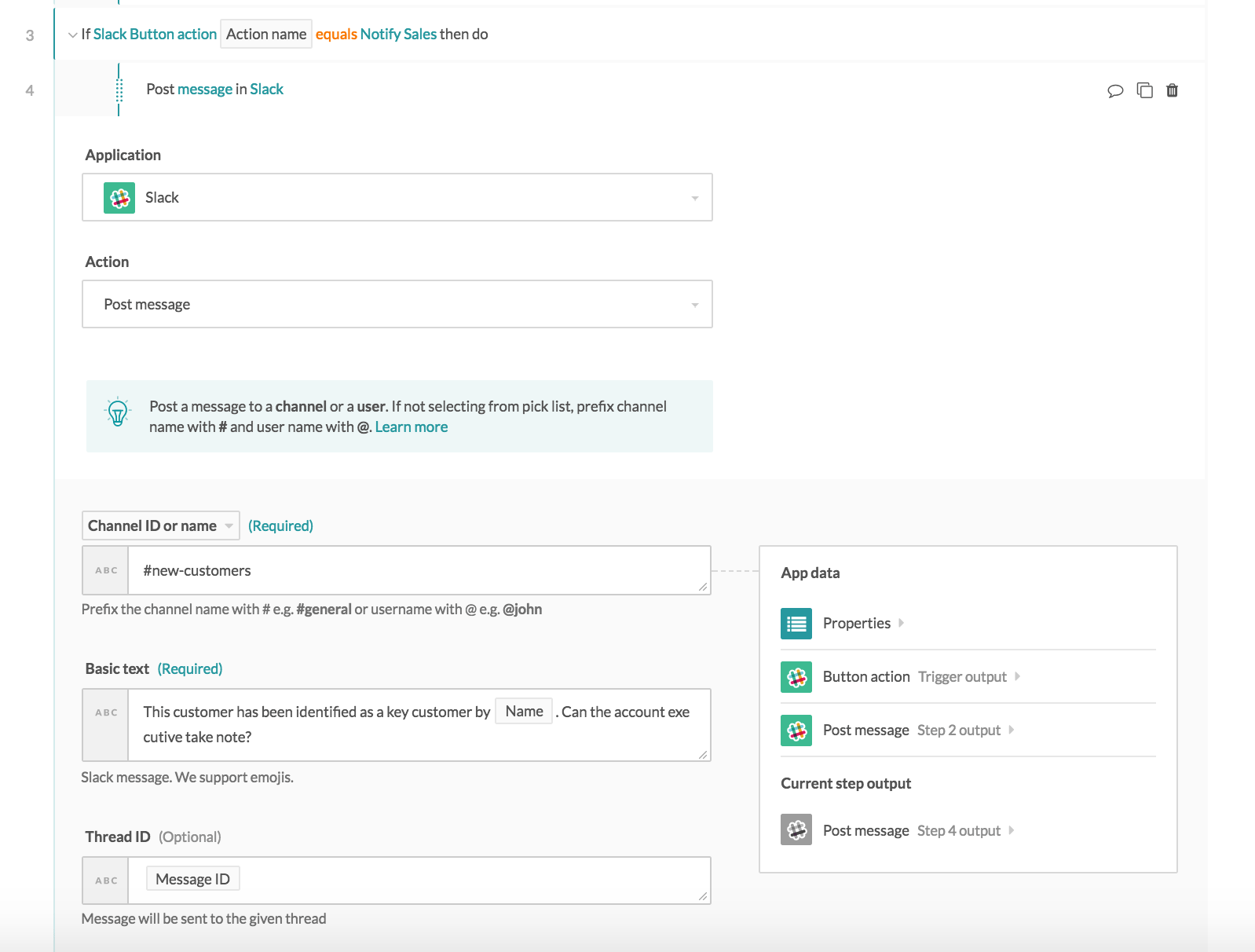 # Example recipe #2: recipe that replies to a parent message ID and continues a thread

Using the same recipe (opens new window) as above, we can see that putting the parent message ID also works to post to an existing thread.

For example, when I select the Notify BizDev button for the second time, it posts to the same thread.

Messages are posted under the same thread via parent message ID

Referring back to the action's thread configuration, we see that we're specifying the parent message ID in the Thread ID input field, which is the initial message that the thread is under.