If you like Recipe lifecycle management (RLCM), we think you'll love Environments.

Built on the same principles as RLCM, Environments offers a seamless deployment experience across unified workspaces. Check it out!

Exporting packages allows users to create a distributable file that contains related recipes and their dependencies.

The export process in recipe lifecycle management typically happens after the development of a set of recipes and their related assets are completed or when a new change in your business process requires the recipes to be edited. In Workato, recipes, and assets are exported as packages in the form of a zip file. The file contains json file representations of every one of the exported assets.

Packages are used to:

After the export process is complete, you can import the package in another Workato instance to apply the changes made.

This section covers how Workato recipes and dependencies can be converted to shareable assets known as packages. If you have already exported a package, you may move on to our other sections:

To begin exporting a package, start by defining an export manifest. A manifest is a record of all the selected recipes and dependencies that users can use for export and re-export. The manifest can also be edited after the creation and first export.

Reuse a defined manifest if the recipes have been iterated on and the same set of objects have to be exported.

To begin, give the manifest a name so users can identify the content and select the source folder. 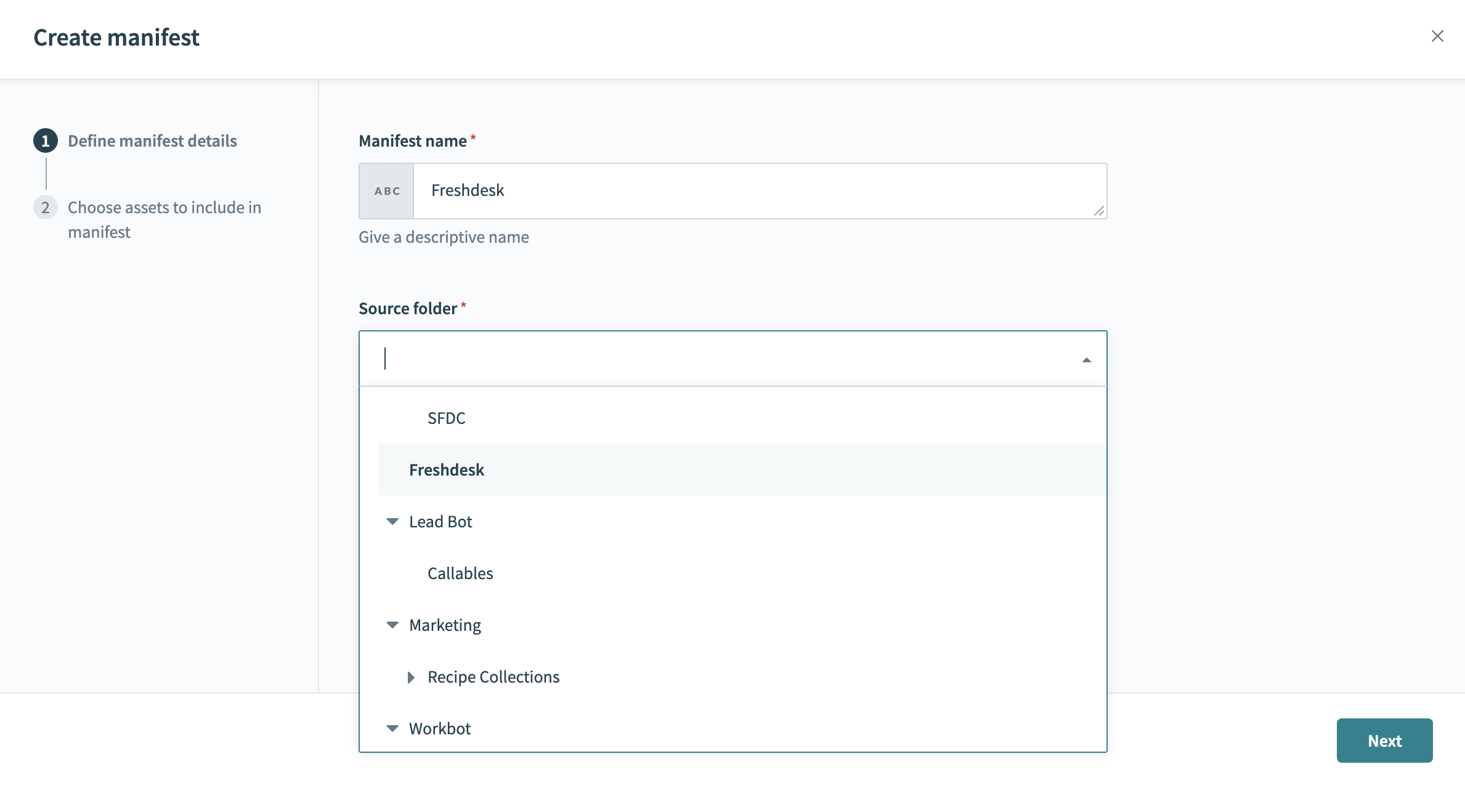 Begin by providing the manifest name and source folder 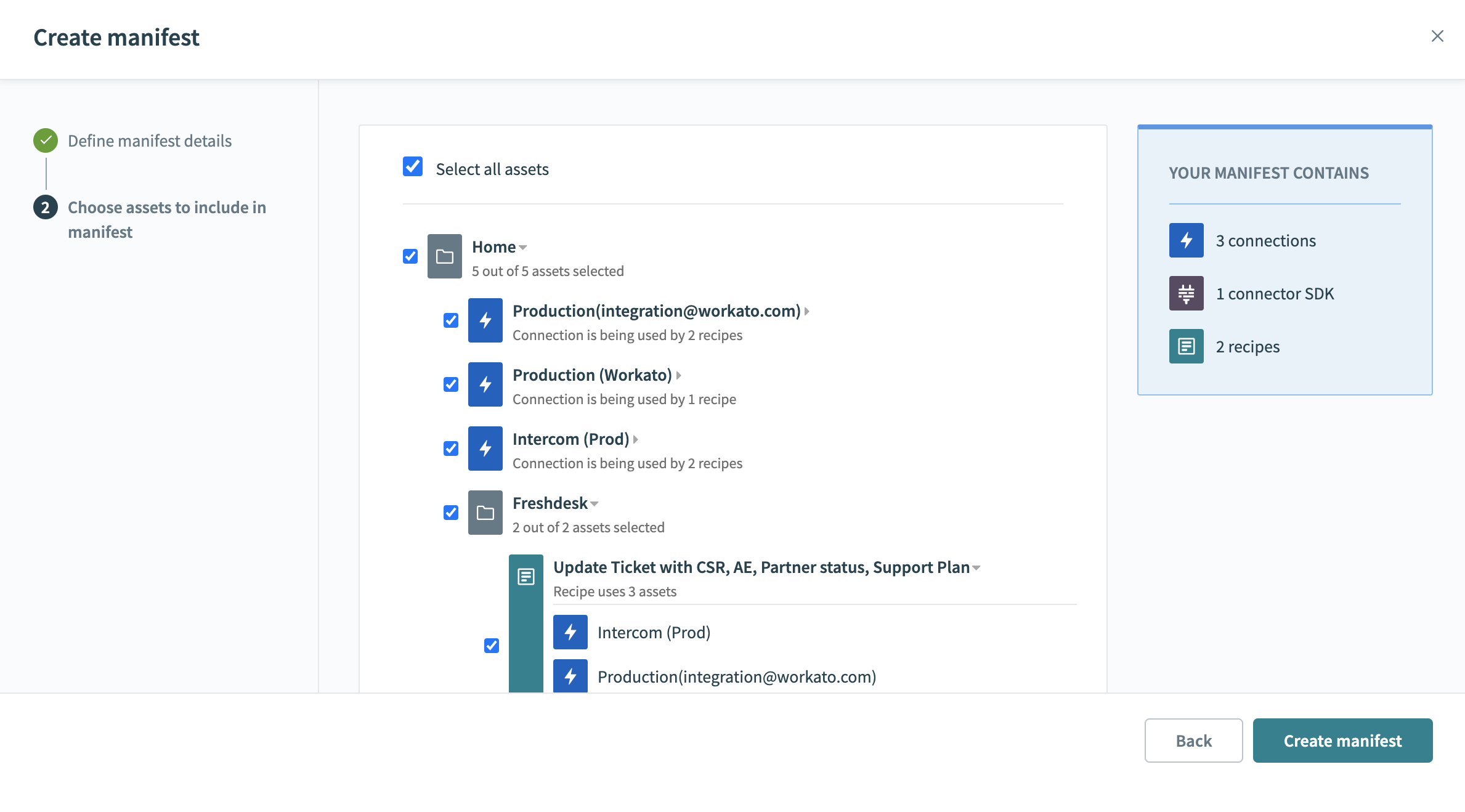 Example manifest with recipes and dependencies

On this screen, select/deselect the assets that you wish to export. All associated connections, custom connectors, lookup tables, and callable recipes (including Recipe functions), will also be shown on this page along with all environment properties in the Workato account.

# Dependencies from other projects

Note that assets in different projects will not be included in the manifest. If there are recipes that call recipe functions from other projects, you will need to reorganized these recipes into the same project to include them in the manifest.

When assets are not in the folder, the wizard will display a warning (as shown below). In this case, if the connection needs to be included as a part of the package, you should go to the App Connections page and move the connection to the right folder. Connections in the Home folder are shared connections that will be available for export regardless of the chosen folder. Orange warning messages can be safely ignored if you wish to proceed with the export without dependent assets.

As dependencies related to the asset are deselected, a similar orange warning will appear on the recipe to inform the user that a dependency will be missing from the final exported folder. By expanding each recipe line, users can re-select the asset with a click of a button. If the dependency is unnecessary for export, this warning can be safely ignored. 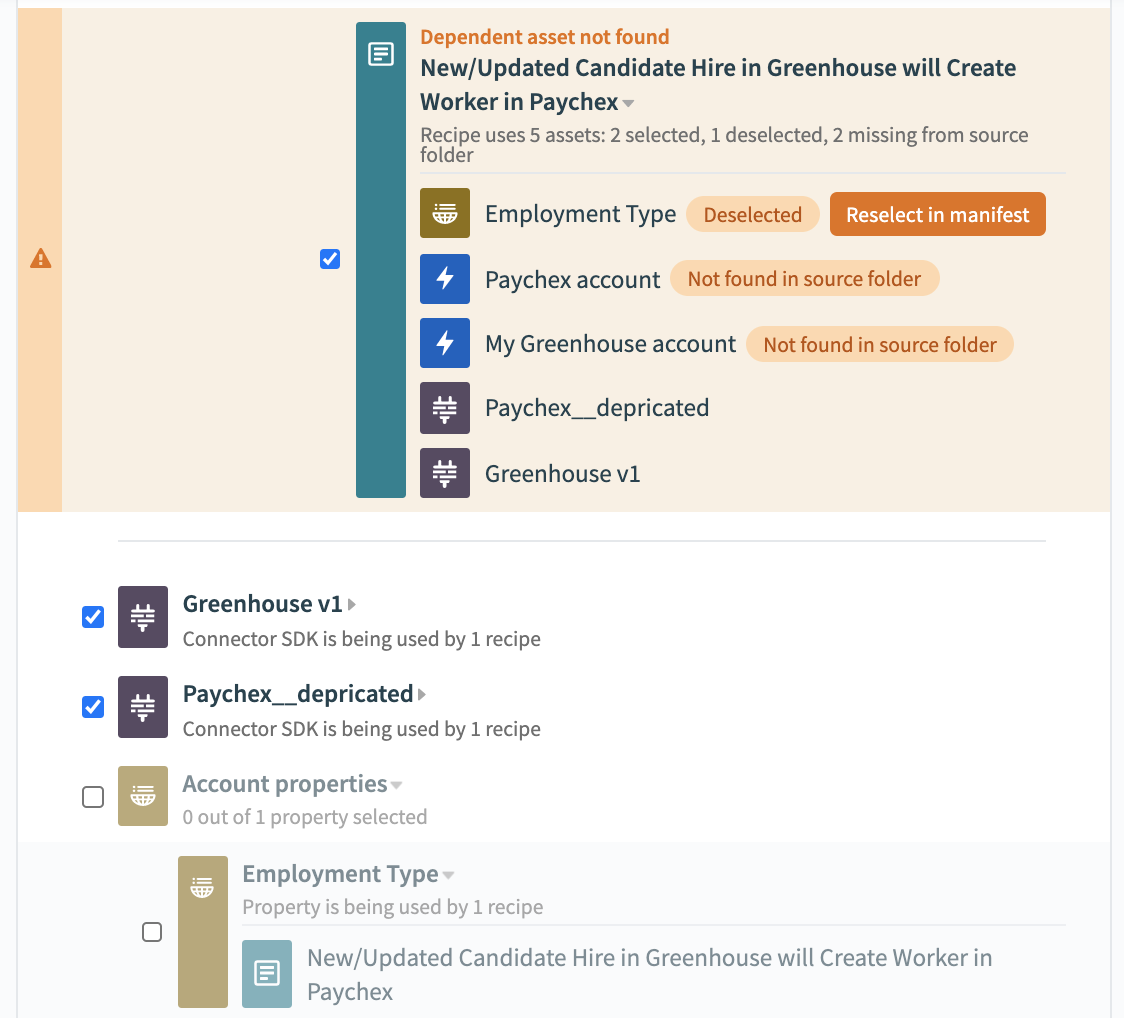 As objects are deselected, warnings appear 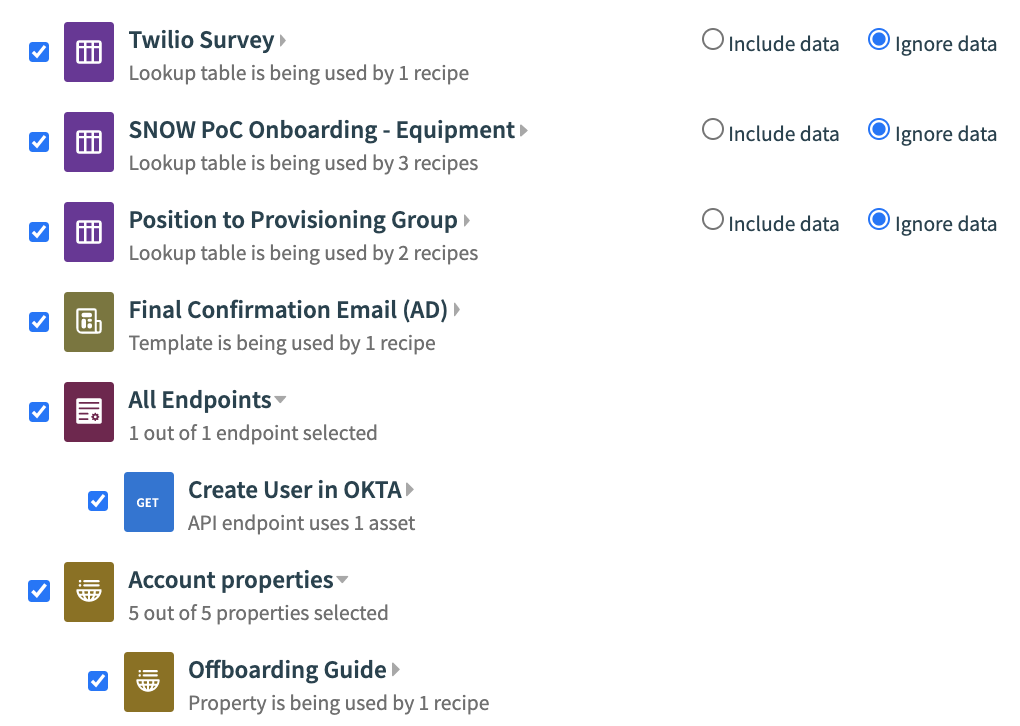 "Ignore data" or "Include data" on each lookup table

Finally, save the manifest. The same configuration of recipes and assets can now be used during multiple exports. To reuse the existing manifest, find the manifest in the main export tab and select it to access its content.

# Export A Manifest As A Package

After creating a manifest, export the manifest as a package by clicking on the ‘Build and export package’ button on the top right of the screen.

Clicking on the button will begin the process of creating a .zip file package and open a pop-up with the export status. Once the .zip file completes building, you can download it.

The export process produces a zip file for download

All exports are saved in the ‘Export history’ tab of the manifest. Click the ‘Download zip file’ button on the last column in the history table to re-download that version of the package. The version of the package is saved at the point of export. The package will persist for as long as the data retention period on that account. Check the Account settings (opens new window) tab to find the data retention period of your account.

# Returning To An Existing Manifest

After the continued development of recipes in the same folder, users may want to return to an existing manifest to re-export the content. During that time, one, or more of the following may have occurred:

To maintain cross-compatibility and synchronization across Workato instances, a series of automatic checks will take place before a manifest can be exported. If assets were deleted, moved, or renamed, the manifest structure will have changed from its previous configuration and will thus be highlighted to the user.

To continue with the export process, the user must review the manifest and remove deleted files or accept changes.

As objects are deselected, warnings appear

If assets were edited (eg. recipe action/mapping changes, additions to a lookup table), they will be highlighted as changes in the manifest with a blue tag.

All edits that do not affect the manifest structure can be ignored and the user can proceed to build the package by clicking on ‘Ignore and build package’. The package will be downloaded with the same manifest content with the latest changes. 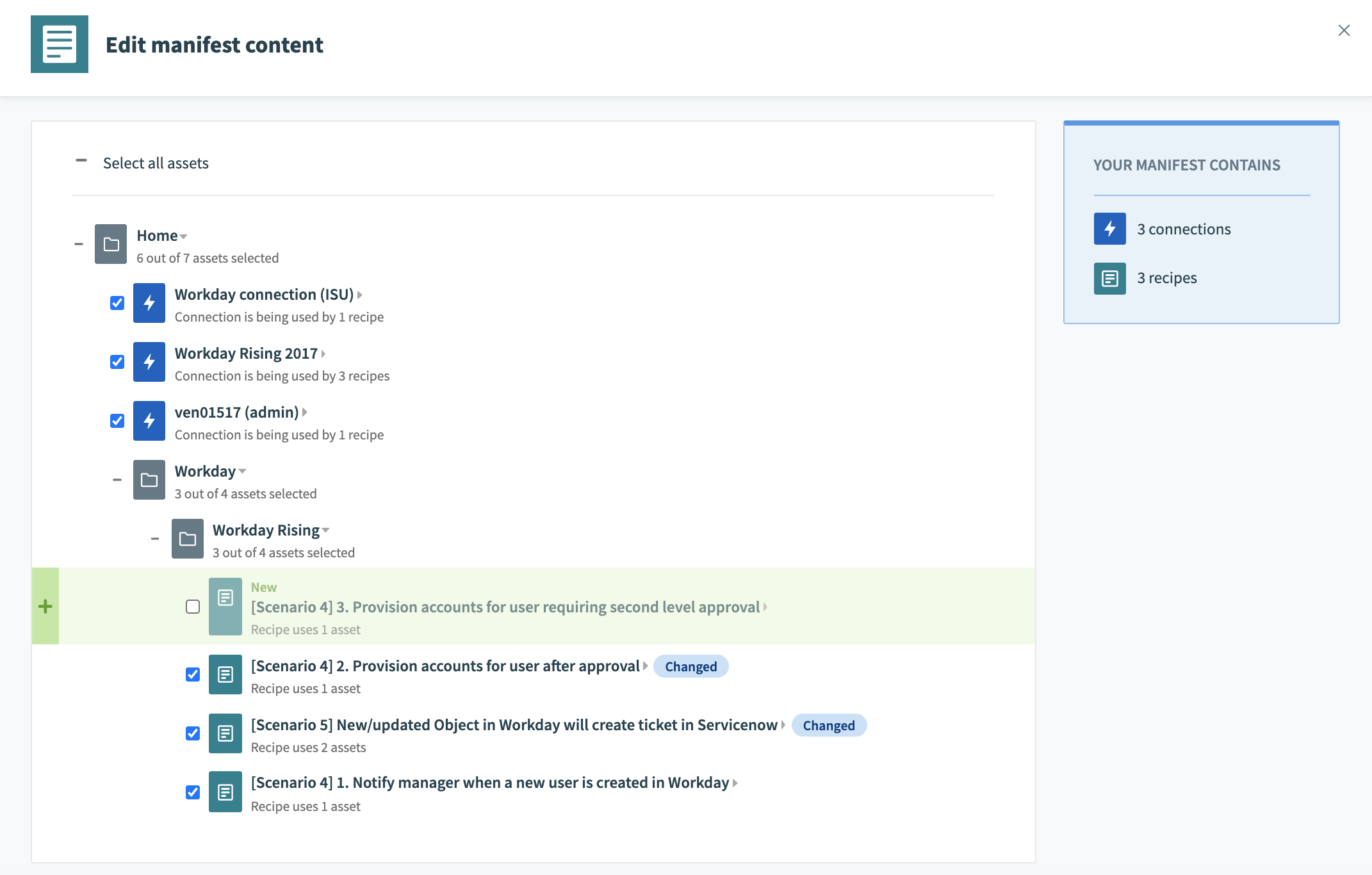 Example of an edited recipe and a new recipe

If a new recipe or dependency is added to the folder, it will be highlighted with a green (+) sign as shown in the image above. To add this new object to the manifest, select the checkbox and save the manifest. The new additions will be saved as the latest manifest version.