If you like Recipe lifecycle management (RLCM), we think you'll love Environments.

Built on the same principles as RLCM, Environments offers a seamless deployment experience across unified workspaces. Check it out!

There are multiple ways to deploy a tested package to a new environment.

This section covers how Workato recipes and dependencies are deployed (imported). If you have already imported a package, you may move on to the last section on working with external source control systems:

When importing, you are able to choose the folder into which you want to import, which must already exist. It will be helpful if it is clear from the naming scheme which folder should be used for import. 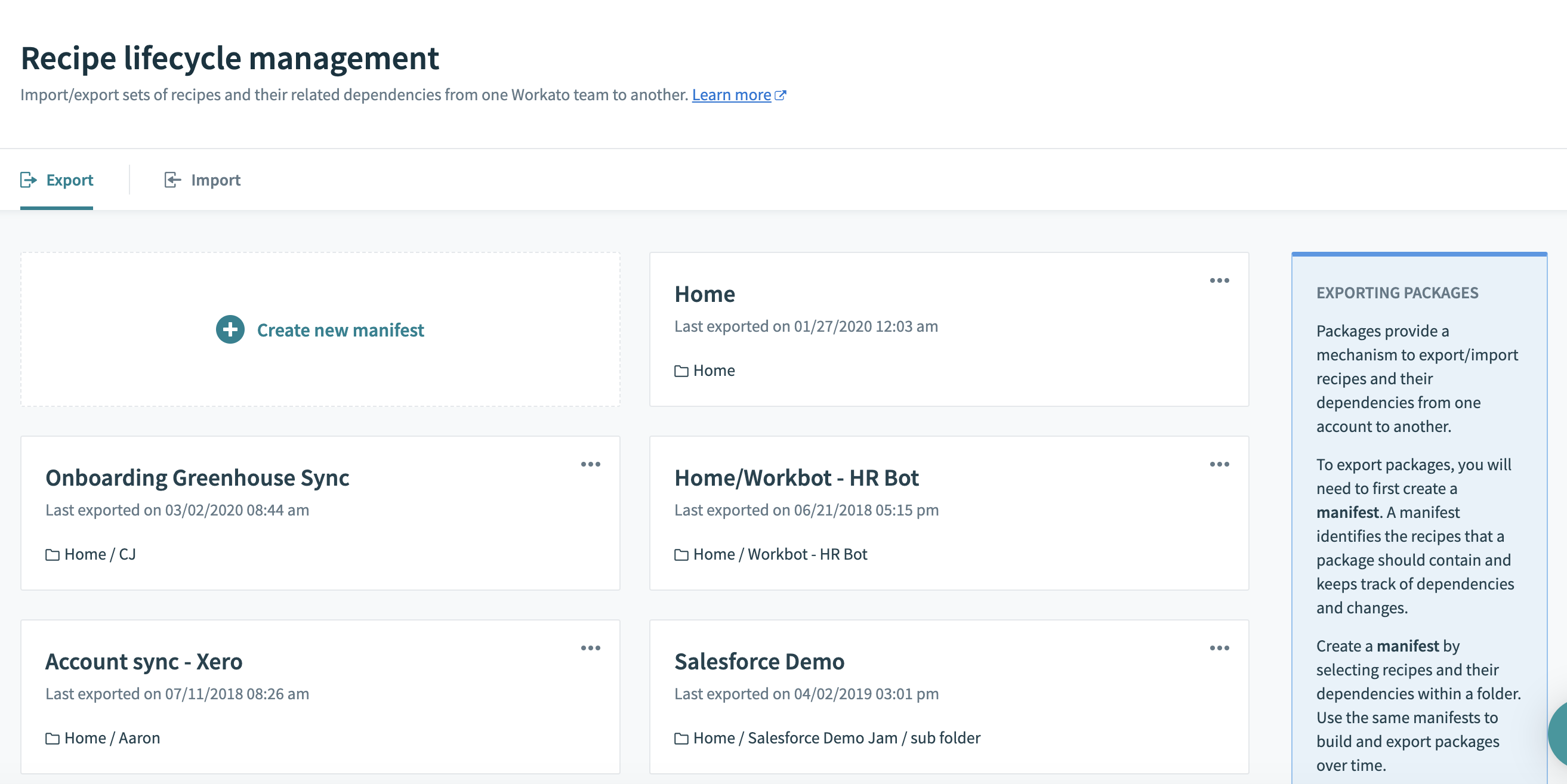 From the recipe development lifecycle page, select the ‘Import’ tab to begin.

Select the .zip file to import from the computer as well as the target folder. The wizard will begin reading the package and loading its contents. It will also compare the corresponding recipes and dependencies in the account and look for changes.

On the import preview screen, each item is assigned a tag that will inform the user of its import status. 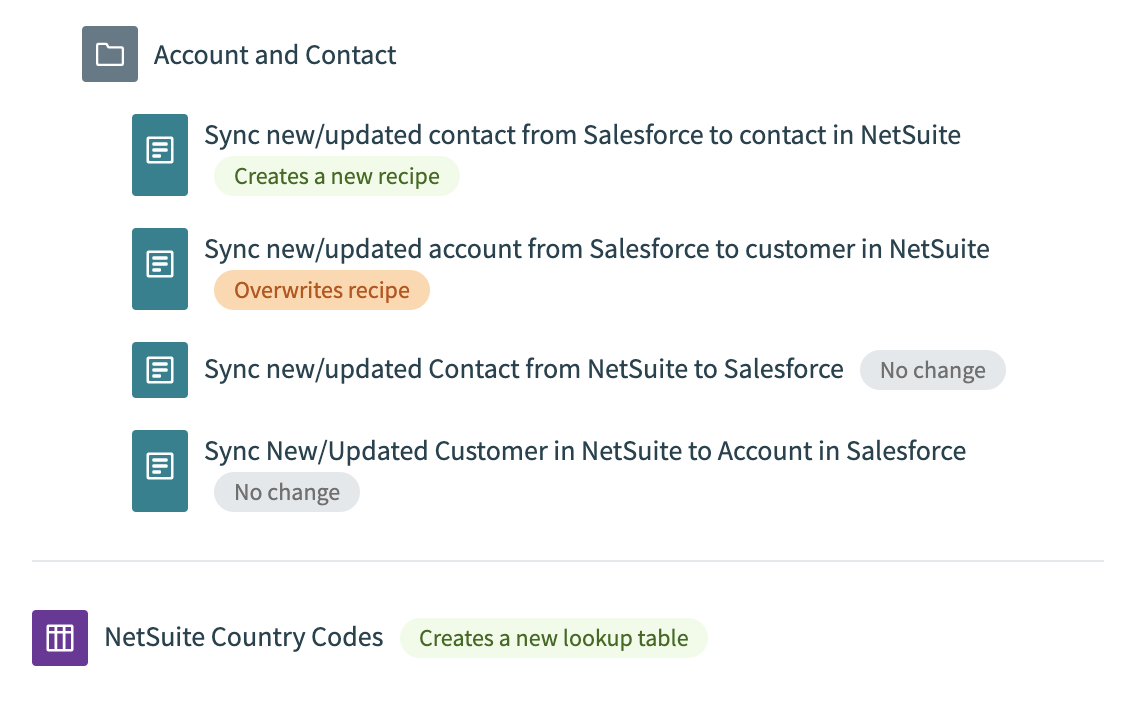 Example status tags for recipes and assets that will be imported 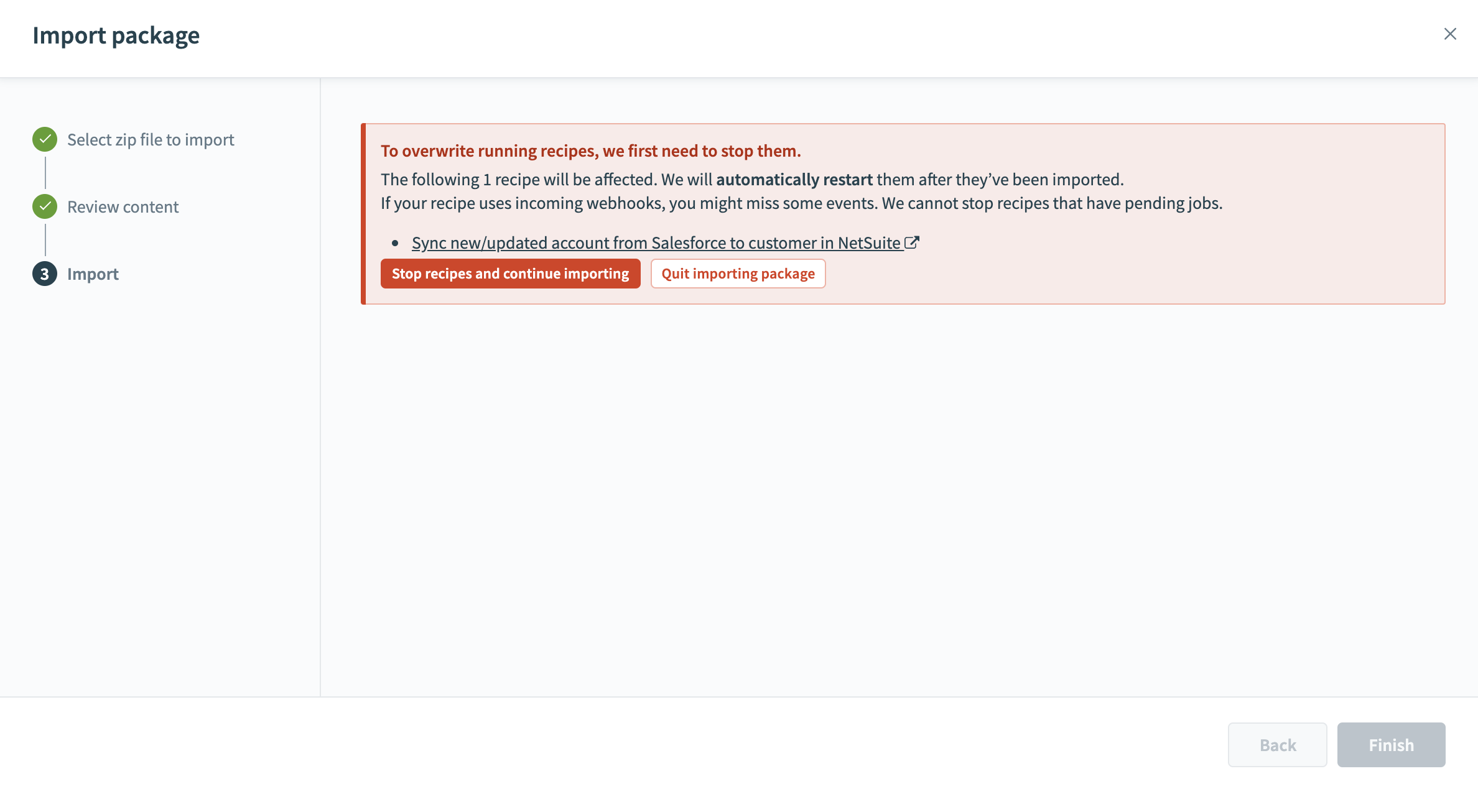 Running recipes will be stopped and then automatically restarted

If there are running recipes that need to be updated, a warning will appear after the review process. Acknowledge that the recipes with triggers that are subscribed to webhooks may miss events in the time that it takes for the recipe to be updated and that recipes with pending jobs cannot be stopped.

The list of stopped recipes are temporarily stored and will be automatically restarted after the import process is complete. Any errors with restarting the recipes have to be fixed manually. Once the process is completed, the new/updated recipes and dependencies should be successfully imported and restarted.

If errors occur with starting a recipe after the import process, you should select the link to the recipe, resolve any errors and restart the recipe manually.

Running recipes need to be restarted in the following scenarios:

One of the main advantages of separate accounts for the different lifecycle phases is that each can have its own set of connections, and these can be different: for example, a development account can use an application sandbox account for its recipes, while a production account uses the production application account with live data.

Lookup tables in the zip file will always contain schema data (name and column names) but may or may not contain data. During import, users can specify if the table data should be or overwritten or ignored. 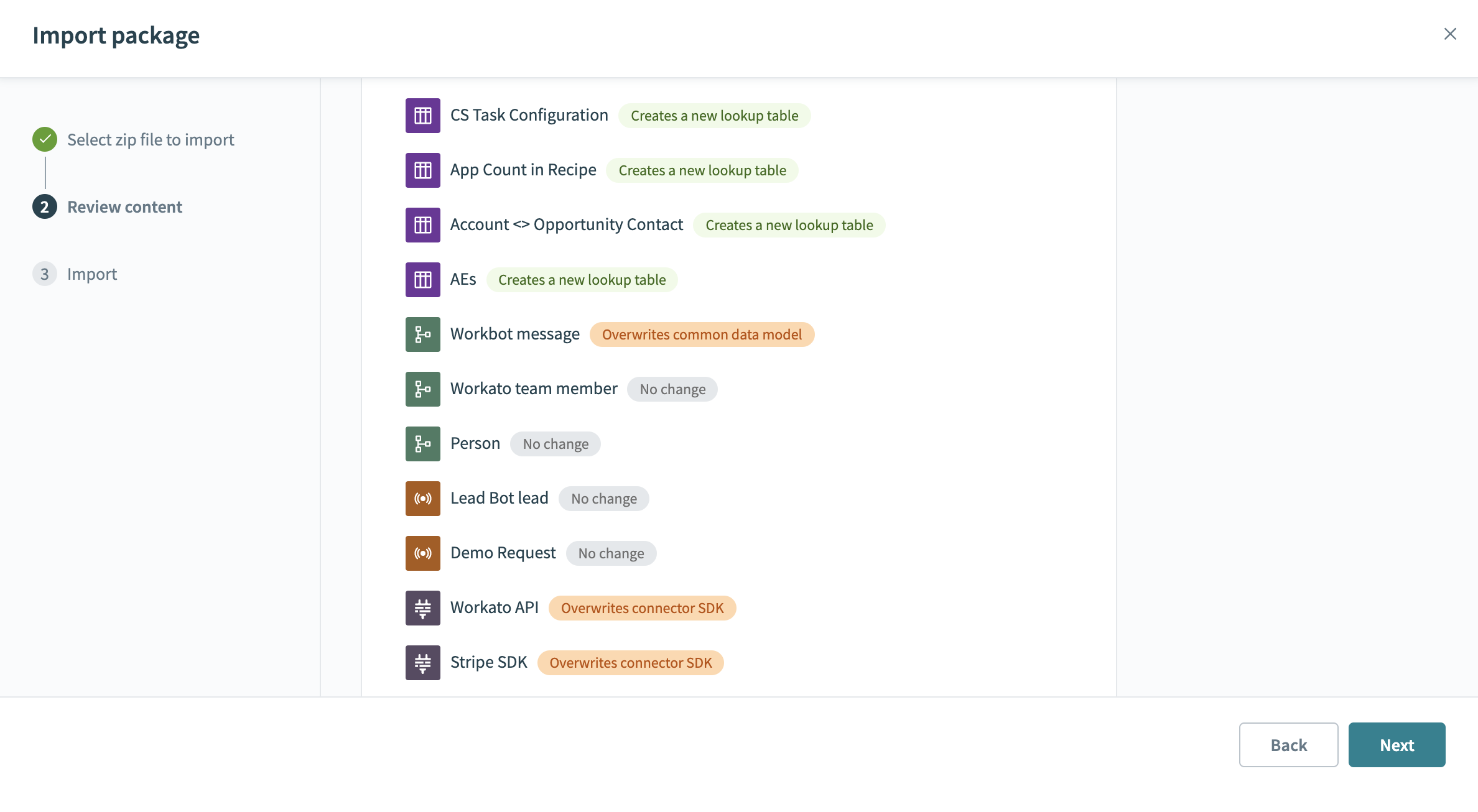 ‘Overwrite’ will cause all table data to be overwritten and all data in the table to be replaced permanently. ‘Ignore’ will disregard all table data even though the table was exported with data.

Workato recommends you establish rules and procedures for the use of these options. The simplest approach is to use the defaults: “include data” on export and “overwrite data” on import. This assumes, however, that the lookup table in the importing account can be safely overwritten, without affecting recipes that are not part of the package being imported.

Other recipe dependencies will have the following tags according to their statuses.

The following table details how an imported package's assets are moved into your Workato account.