After you've built your connector, you'll be able to share this connector with others using the share tab. 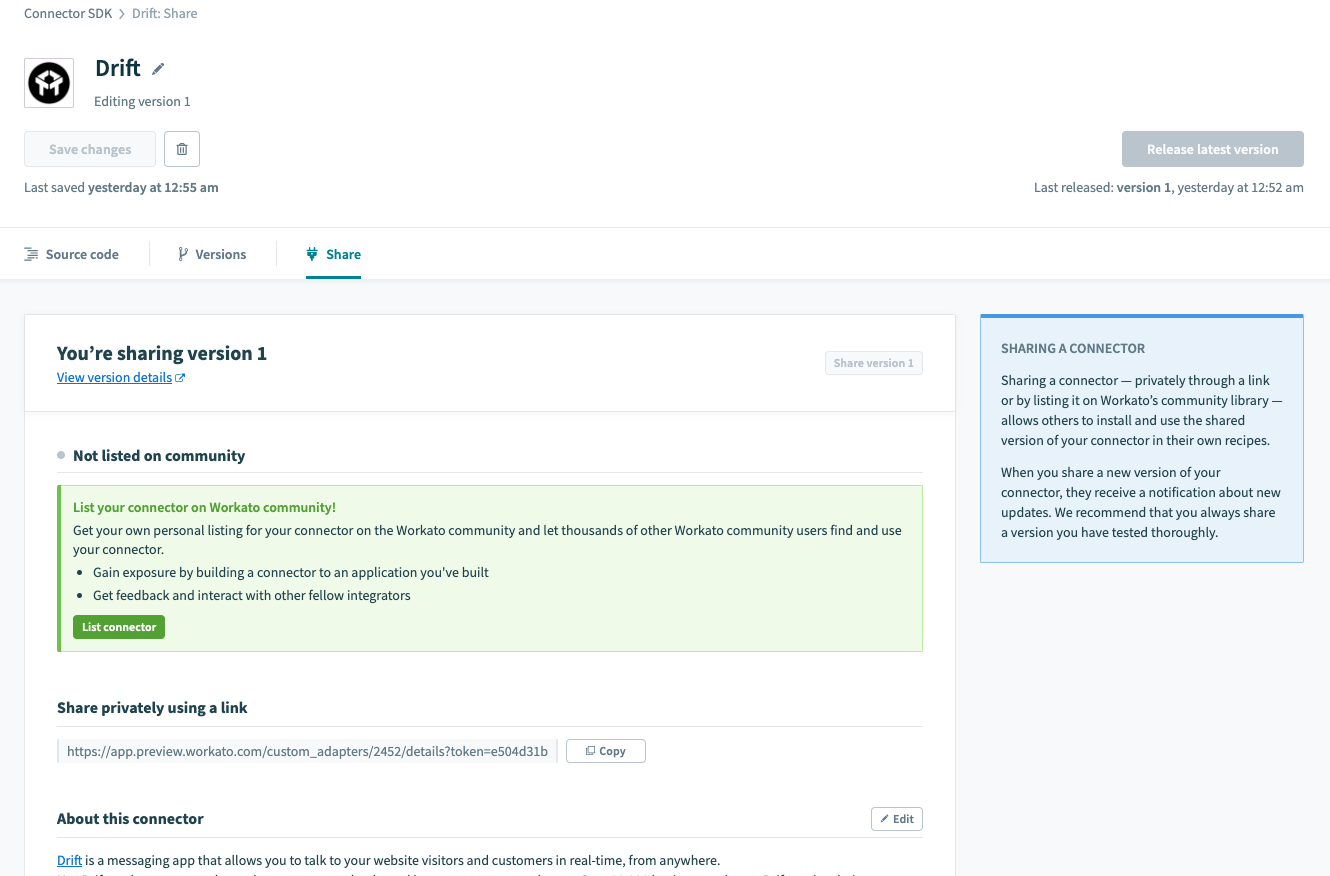 # Sharing for the First Time

Clicking on the "Share version X" button converts the "Share" tab into your new sharing console. This is where you control all the sharing capabilities of your custom connector. 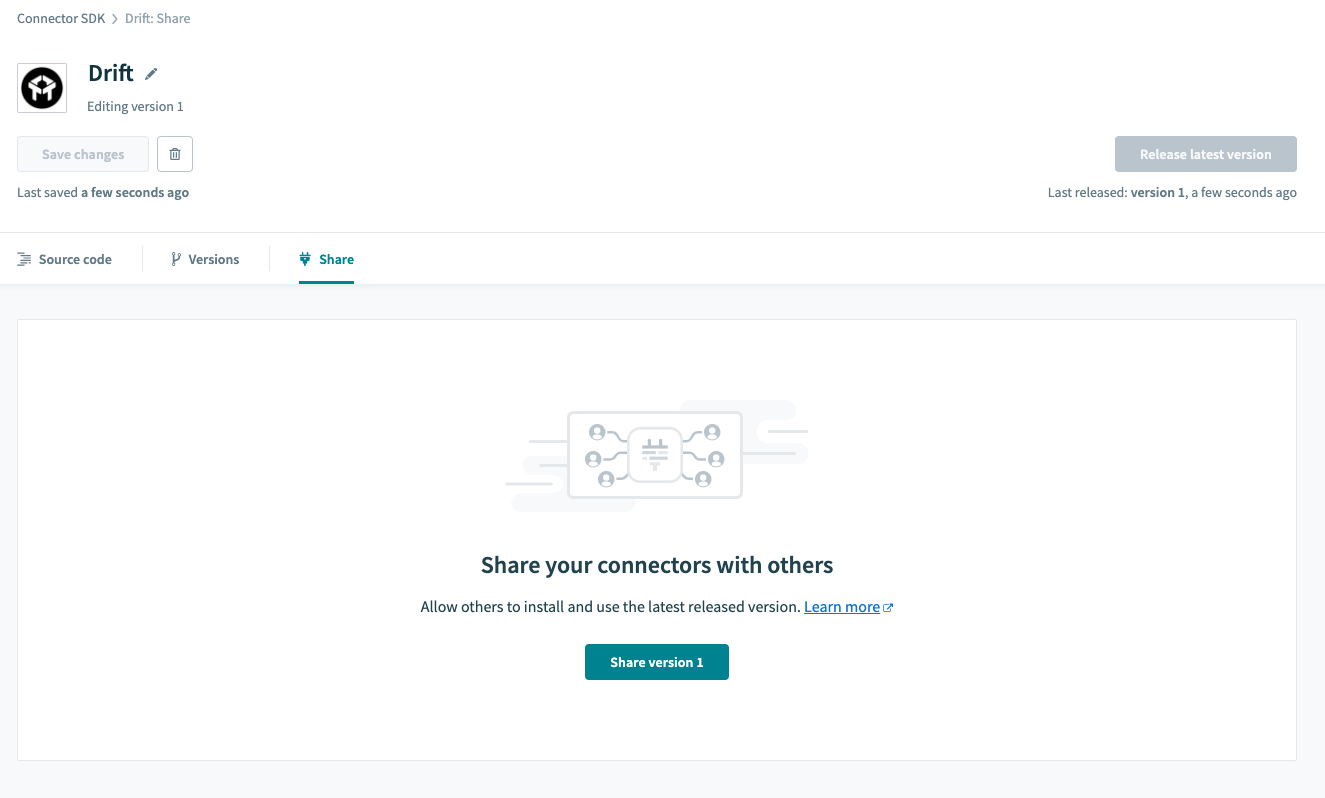 # Sharing your Connector with the Community

There are two ways to share connectors in Workato. You can share your connector with the Workato community or share it with directly with other Workato accounts.

Build Integrations as a Community

Sharing with the community allows other Workato users to automate with your custom connector. This promotes and increases usage of the target application, while simultaneously expands wall-to-wall automation use-cases for everyone.

Find out more about listing custom connectors and best practices.

When you list on the community, you'll be asked for the app which this connector connects to. You should select the app that best describes your connector. Simply search for the name of the application you are connecting to and select from a list of apps that Workato has approved. 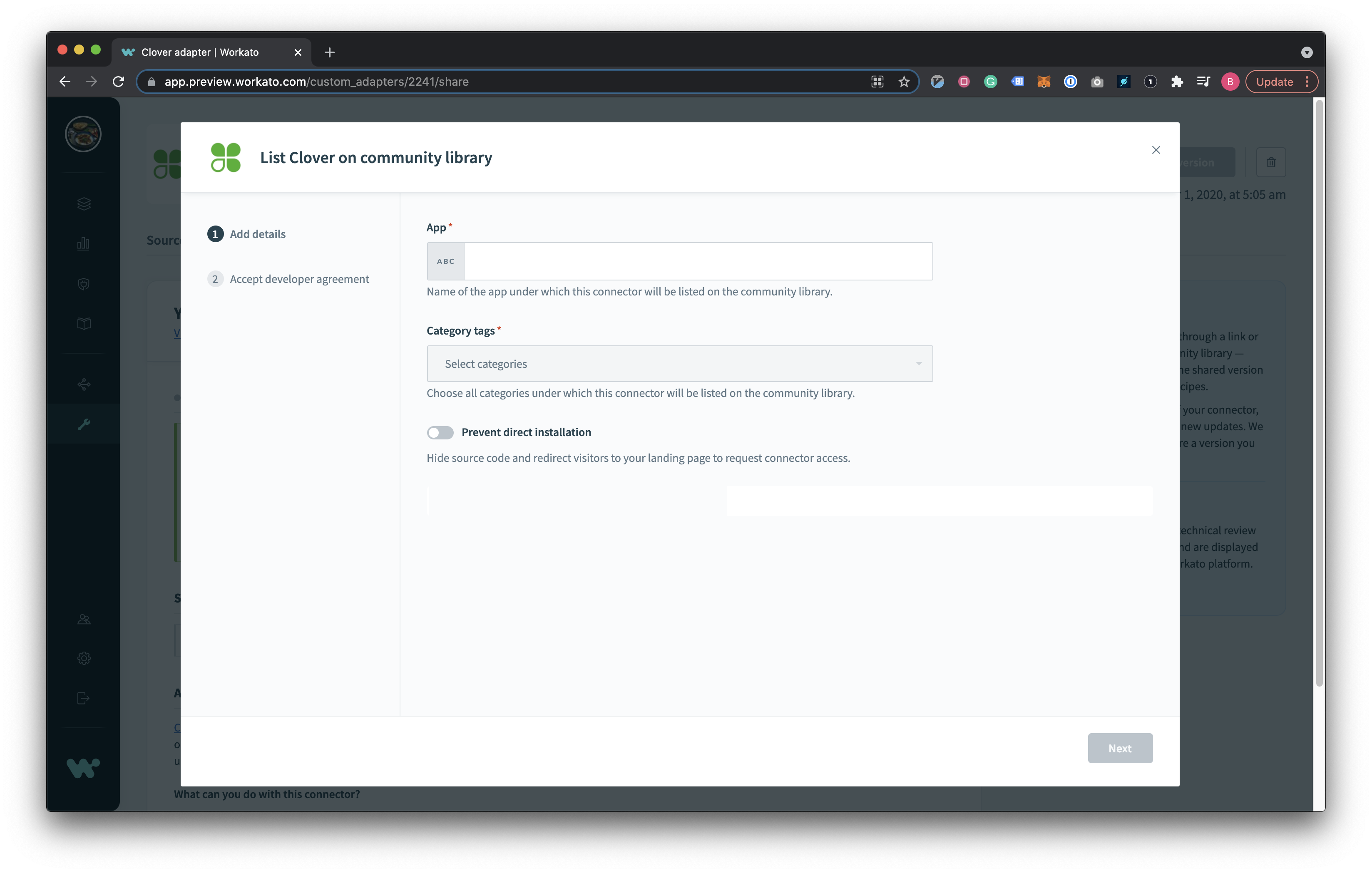 Select the app that your connector is built for

If your application cannot be found, go ahead and type it in plain text!

You should only use a logo and provide categories which correspond to the app you are connecting to. In cases where we see otherwise, we may have to disable your listing until it is rectified.

Find out more about listing custom connectors and best practices.

Sharing your connector privately can be easily done via a private share link. You can find this in the share tab of your SDK console.

You can revoke and generated your sharing token anytime. This allows you to have more control over who has access to your custom connector.

Recipe lifecycle management is a tool used to export and import entire folders of recipes from a sandbox environment to a production environment in Workato. Often, recipes that you want to export from one account and import into another contain custom connectors that you have built or cloned. When exporting these recipes, Workato helps to export any custom connectors in the manifests as well.

When exporting a manifest, the latest released version and the attached version note of your custom connector that is used in recipes are exported as well. Find out more about exporting here.

# Importing a Manifest with Custom Connectors

Be sure to explore any dependencies that your existing recipes in your production account might have when importing a manifest that overwrites a connector.

# 2. Why does an autosave occur before the release of a version or use of the debugger console?

Autosaves only occur when there are any unsaved changes to your connector code. This was done to ensure that any last-minute changes you may have made to your code without saving are picked up. It is always advised to test using the debugger console thoroughly before releasing a version.

# 3. Which should I use to move my connector from my sandbox environment to my production environment - the connector share link or packages?

Packages through recipe lifecycle management are only available on certain plans. While both functionalities can accomplish the migration of your SDK connector, we highly recommend building and testing your custom connector and its associated recipes in your sandbox Workato environment. When you're ready, packages are the fastest way to bring your custom connector(and recipes) from your sandbox environment to production.

# 4. What happens to all my existing connectors that existed before this enhancement?

All existing connectors are backward compatible with this enhancement. They will also contain a list of versions from before the release. You'll be able to see versions since the creation of your custom connector. Creating new versions will require you to release them to use the changes in your recipes.

# 5. I got an update notification, what happens when I update?

Update notifications are always pegged to the latest shared version of its parent connector. Choosing to update always create a new version on top of your custom connector. Be sure to verify that the newly updated connector has changes that make sense to you before releasing it to your own workspace. You can always make edits to the new connector code to suit your purpose.

# 6. How do I know what changes occur across each version and who created that version when working in a team workspace?

Our version history table gives you insight into the actions and triggers present in each version. Our versions table also showcases the user who created a version and who released a certain version. More functionality will come to showcase more fine-grained details about specific changes in the code across versions and the ability to attach notes to different versions. Stay tuned!

# 7. How can I test a specific version of my custom connector in recipes before releasing them to all my active recipes?

We are currently working on improving the coding experience further on the SDK platform to include the ability to run a variety of automated tests on different versions of your custom connector.

# 8. Is there a set way that I should use version notes?

Version notes are meant to be simple ways to communicate information to others in your Workspace as well as to those whom you have shared your connector with. As such, we have made it free-form enough that you may be able to use it as you see fit. Do think about what best practices work best for you! In the future, we plan to introduce additional features that help you build a changelog around your connector. We recommended updating the description of your connector each time you reach a new milestone, such as new actions or triggers.

Now that you're familiar with the platform, its time for you to build your custom connector! Check out our Connector SDK how-to guides.

← Version control
FAQ →
On this page