Data in lookup tables are typically organized like a database table, with columns and rows of data. You can lookup an entry within the specified lookup table by matching against data in one or more columns.

Each lookup table supports up to 10 columns of data and a maximum of 10,000 entries per lookup table.

Here are other common use cases for lookup tables:

Lookup tables are enabled only for certain users. Reach out to Workato sales representatives at +1 (844) 469-6752 to find out more.

# Setting up your lookup tables

There are three ways to upload data into your lookup tables:

Try it yourself on Workato's Automation Institute. Take the tutorial and see what you can do with Lookup tables. Complete the course and become a certified Automation Pro. Find out more here (opens new window)

Select Import from CSV to create a lookup table from an existing CSV file.

Creating a new lookup table and importing a CSV file

# Adding new entries via a recipe

There is a Lookup table connector that allows you to automate your work with lookup tables. This connector supports adding of new entries via a recipe.

The Lookup table utility connector allows you to work with your tables via recipes. This connector supports the following actions: 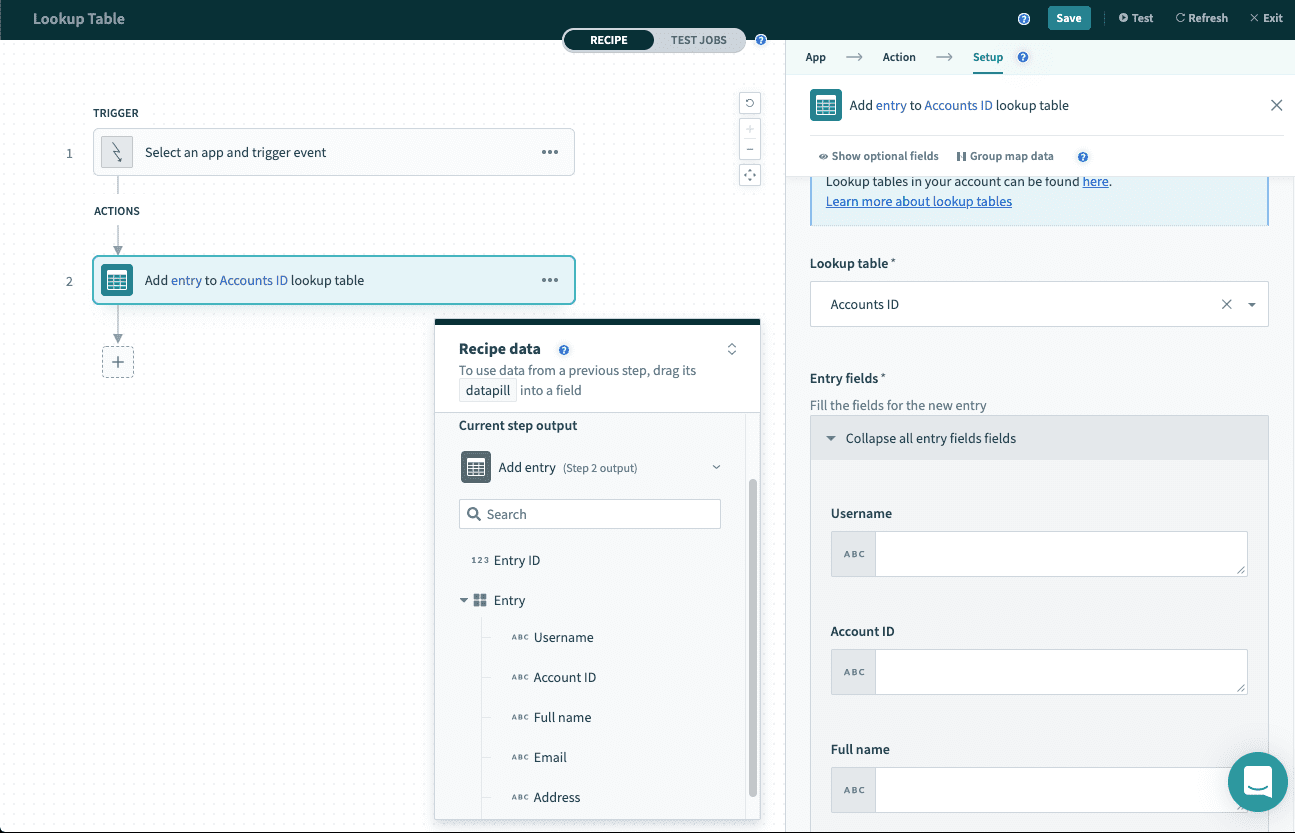 The lookup entry action allows you to search for an entry (a row in the lookup table) by any of its values. The lookup entry action behaves like a search and retrieves a single entry. The first matching entry depends on the values passed in. If you have duplicate entries (i.e. your lookup will return more than one entry), only one entry will be retrieved.

In the example below, we have a table called Vacation Rules with 4 columns - vacation type, department ID, job code and job title. 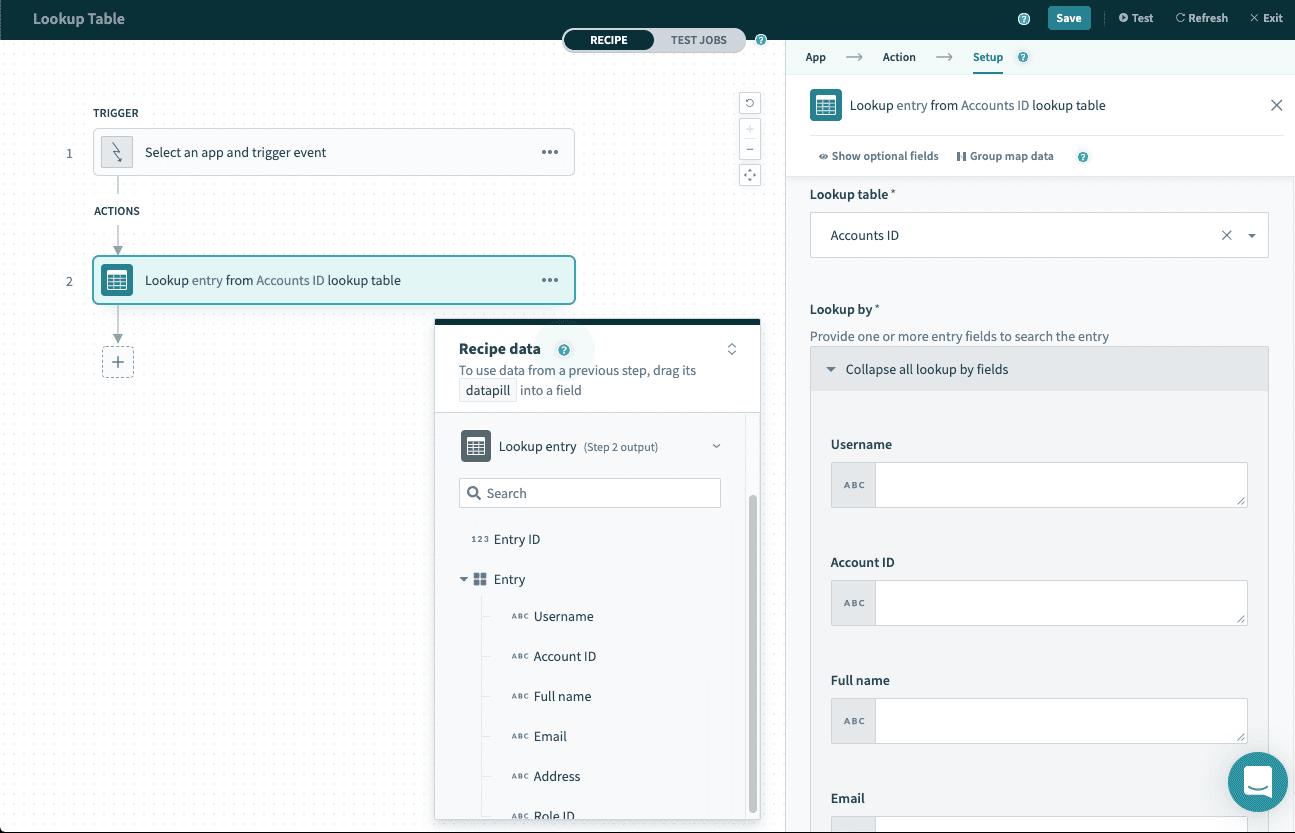 Using the lookup entry action in the recipe

Use this if you expect a list of matching entries to be returned, and wish to process the list accordingly. 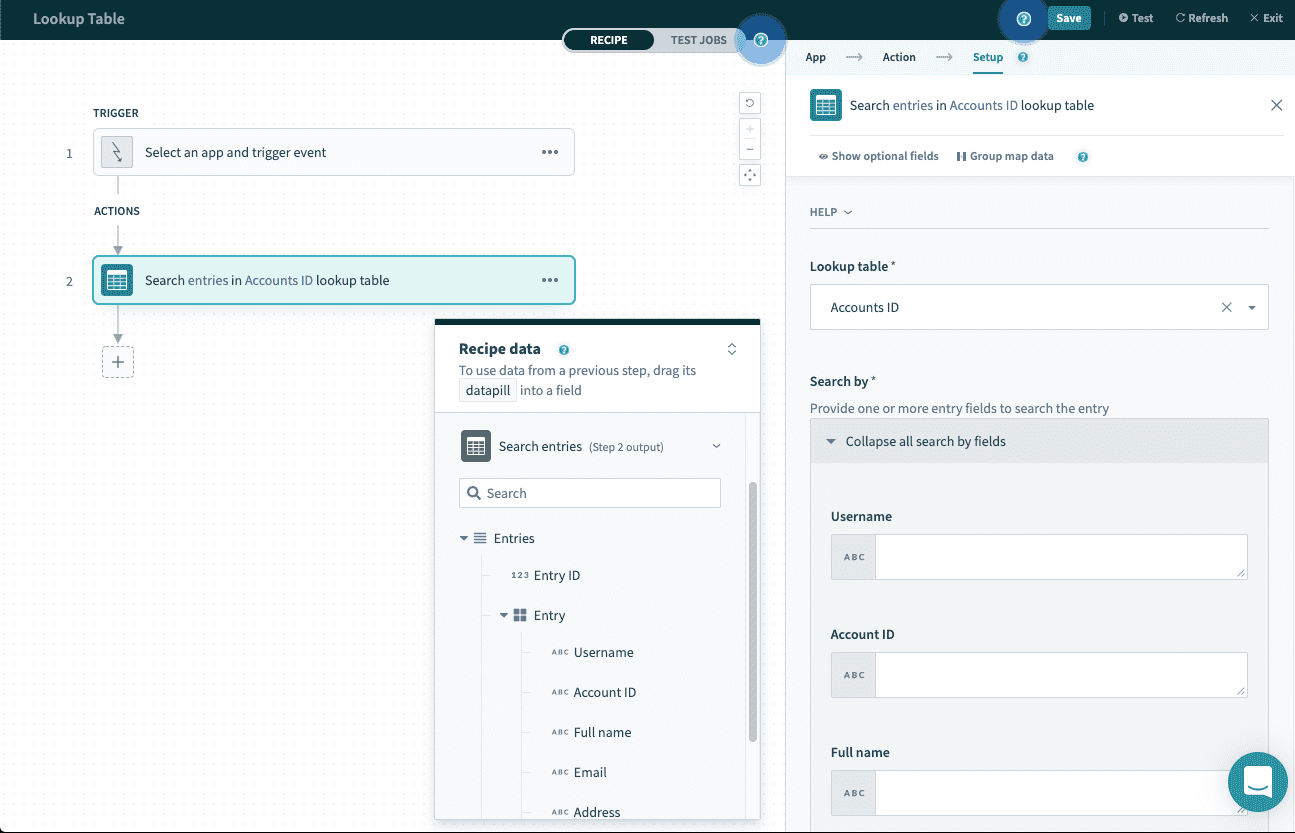 Updates an entry to an existing lookup table. This action requires the Entry ID to be mapped. You can retrieve the Entry ID from actions such as "Search Entries", "Add entry" and "Lookup Entry" action. 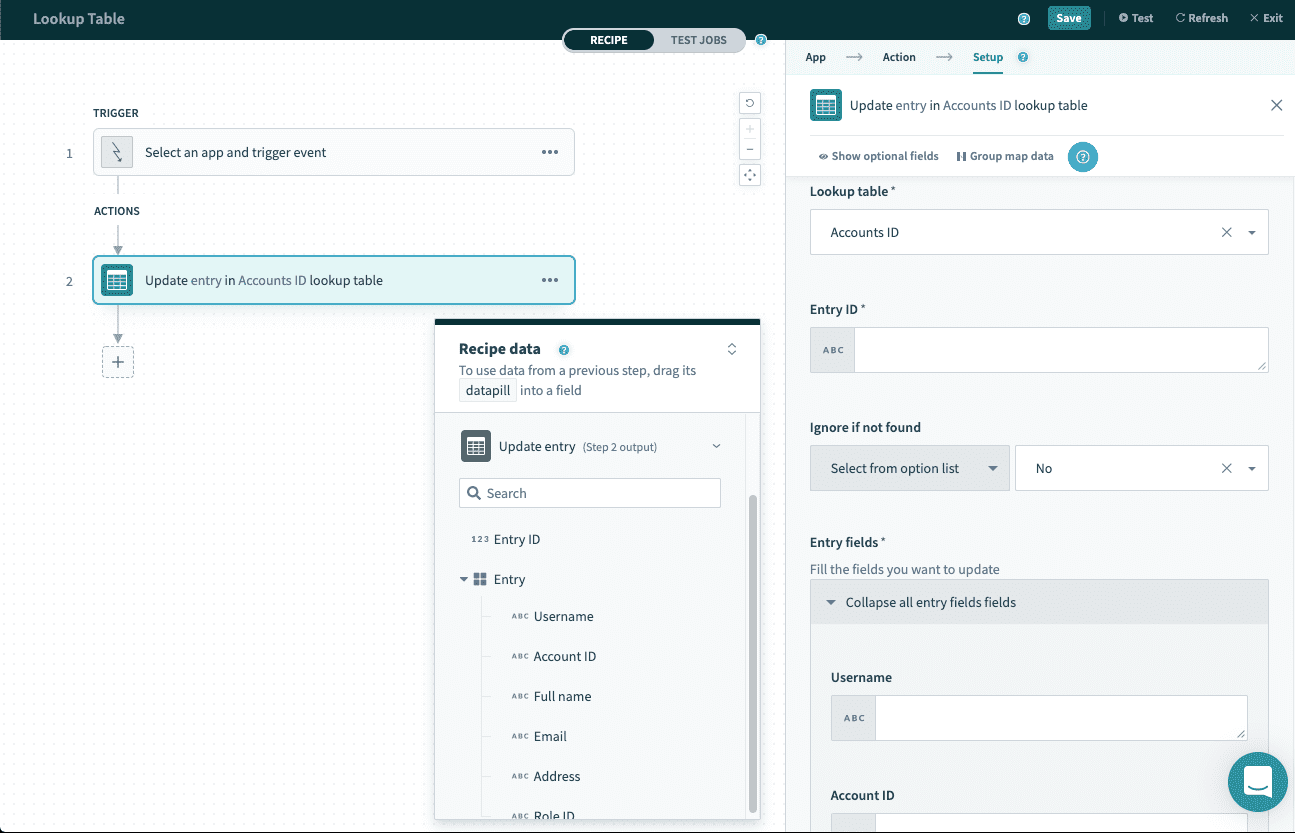 Deletes an entry in the specified lookup table by using the Entry ID.

For this example, the Entry ID is being retrieved from the Search action. 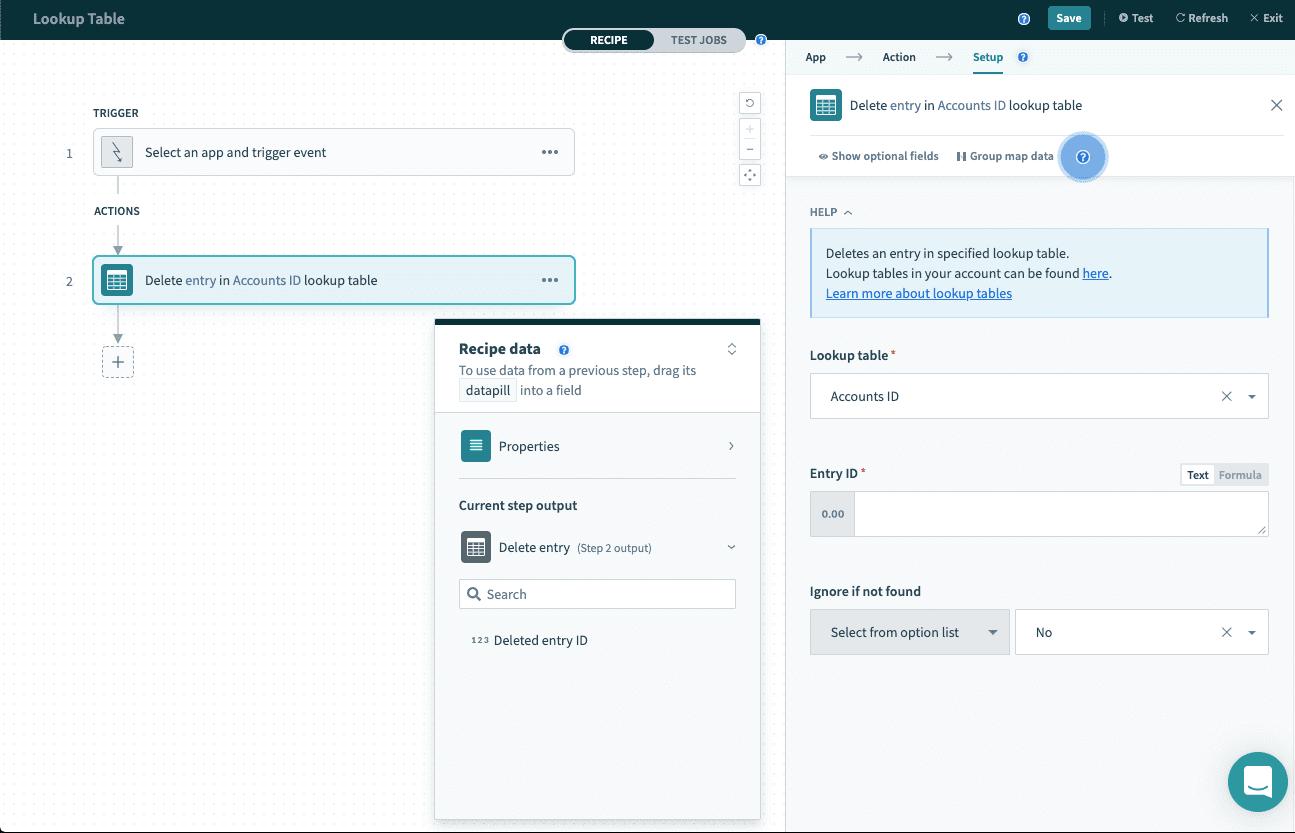 Instead of deleting all entries one by one in the lookup table, the truncate table action deletes all entries from the specified lookup table. Using this action cannot be undone.

In the example below, we are deleting all entries in the table Weekday 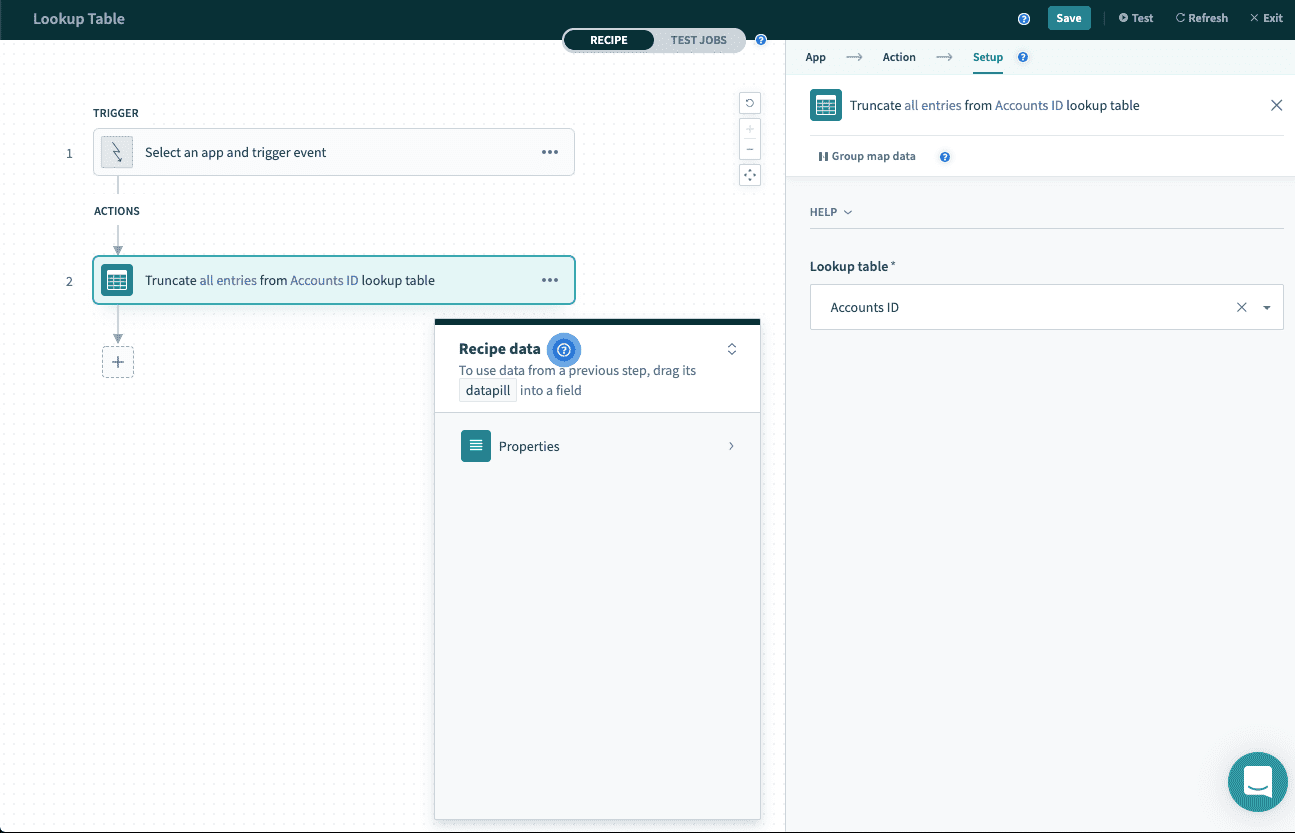 This action cannot be undone.

Besides using an action step to work with a lookup table, you can also use a formula to lookup entries in your lookup table. This equivalent to the lookup action and can be done inside an input field.

To use the formula, set the input field to formula mode, and enter the formula in this format:

The output of a search entries action can be used as in-memory lookup table. This is useful when a recipe invokes the lookup function on the same lookup table 1000s of times by reducing the time taken to perform the lookup.

To use the lookup formula on an in-memory table, you need to first create a Search entries action. This action should return a list of entries that you will need for your use case. Next, set the input field to formula mode, and enter the formula in this format: 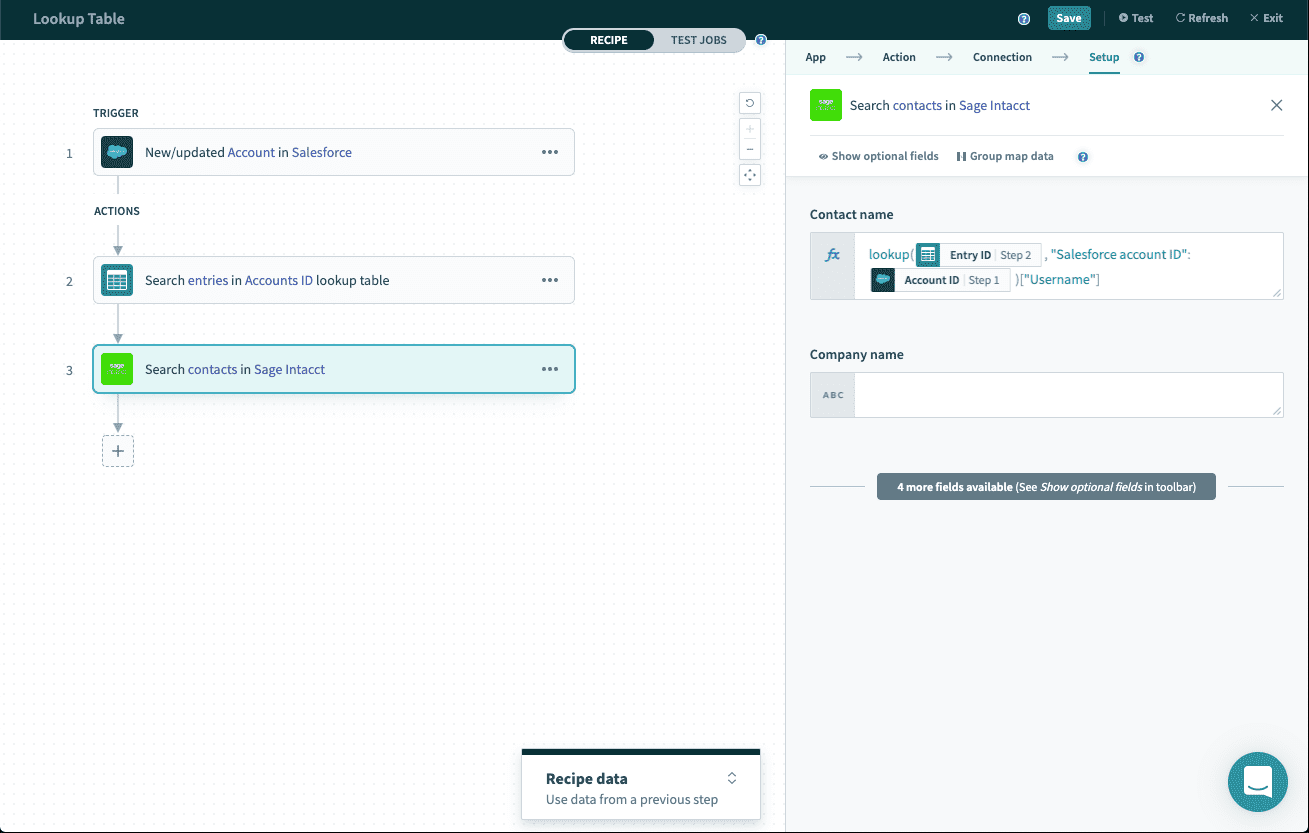 Like the example before this, the formula will lookup the Intacct account ID of the first entry in the Account IDs table that matches any given Salesforce account ID. This time, however, it will lookup entries much quicker and only from the reduced list of entries from the initial search.