Recipe Design
After you create your recipe

Workato provides details into the execution flow of a job, such as the steps that were executed and the input and output data from every step. Workato also supports re-running jobs in cases whereby an error stops a job from full completion.

In this guide, we'll cover:

From this page, you can:

Job reports can be customized to show up to 10 additional columns. These columns can be any data available in the recipe. For example: If the recipe processes invoices, the report could include an Invoice ID, Invoice amount, and so on.

To see how to create a custom report, open the instructions below:

# Viewing Details For A Specific Job

The Job details page shows the input data and output data of each step in the recipe, allowing you to inspect the job and debug it if needed.

To view details of a specific job, click the job in the Job reports page. This will open the Job details page, which contains:

Jobs can have the following statuses:

Recipes containing long actions may run for a while, depending on the recipe. When a user stops a recipe, the jobs that are in the processing state are paused. Paused jobs resume when the recipe is restarted.

After recipe restart, new jobs are executed using the new version of the recipe. In this example, the new job has started with the recipe version 3.

To view details about a step in the recipe, click on the step. This will open an expanded view of the step, where you can view its input and output data.

When conditional actions are expanded, there is a single Output tab. This shows whether the condition evaluated to true or false:

Note that when expanding repeat steps, steps made during all iterations won't display.

For example: If a repeat step is set up to process a 10 item list, only the last item in the list will display in the Job details page.

Similarly, when an error occurs within a repeat step, the job details will show only the steps carried out in that particular iteration and not any other iteration before that.

If your job encounters an error and stops processing, the failed step will be highlighted: 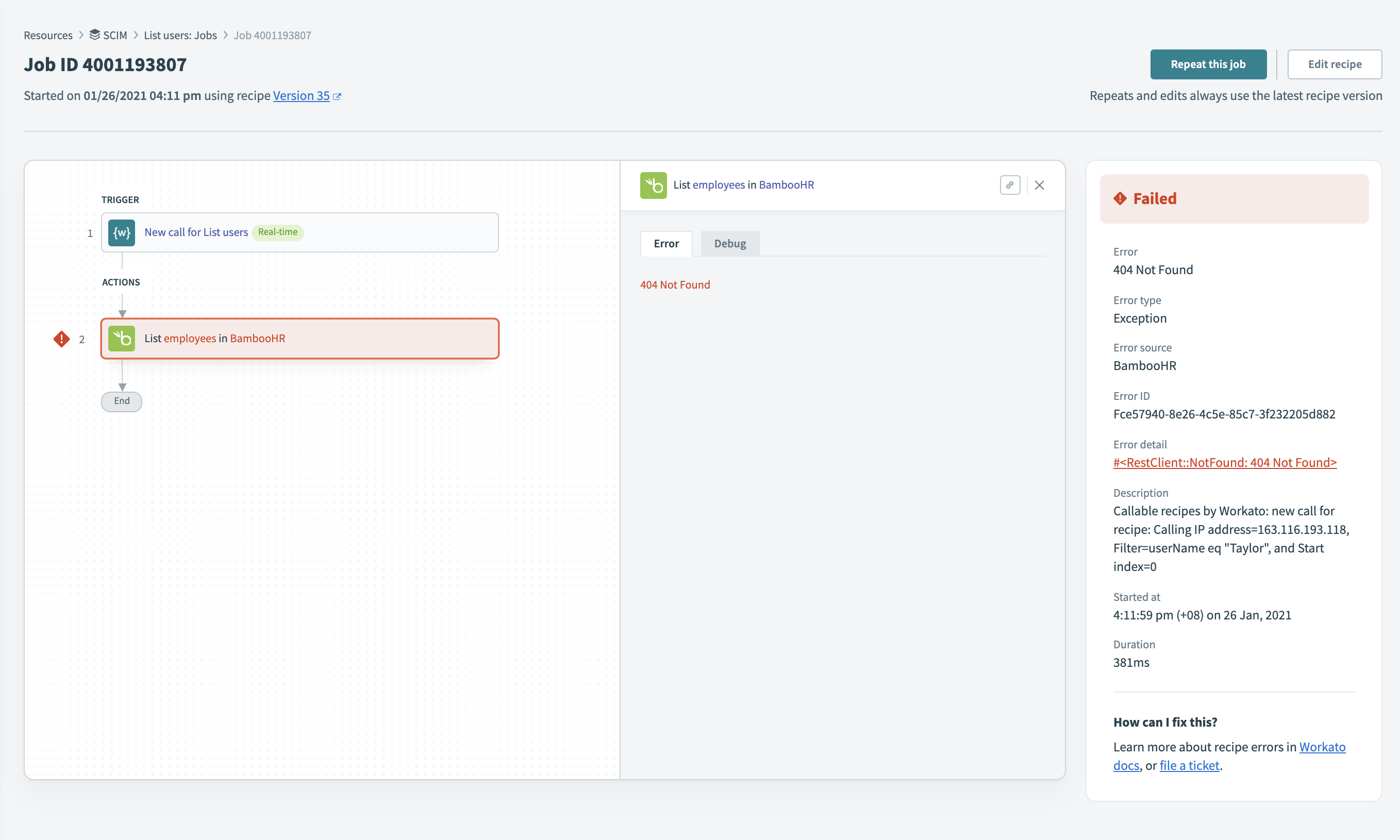 You can use the Debug tab for the step to further troubleshoot the issue.

If a job or a single step is taking too long to execute, it will time out. Error messages for jobs that time out will include details about the reason.

The current timeout limits are:

If you recipe timeouts due to a single step taking too long to process, consider using Long actions. These are special actions for processing bulk data.

A rerun of a job will always use the latest version of the recipe. If the recipe has been modified since the job ran, the rerun will use the most recent version.