Recipe steps can be actions, or control flow statements that help you describe business logic. 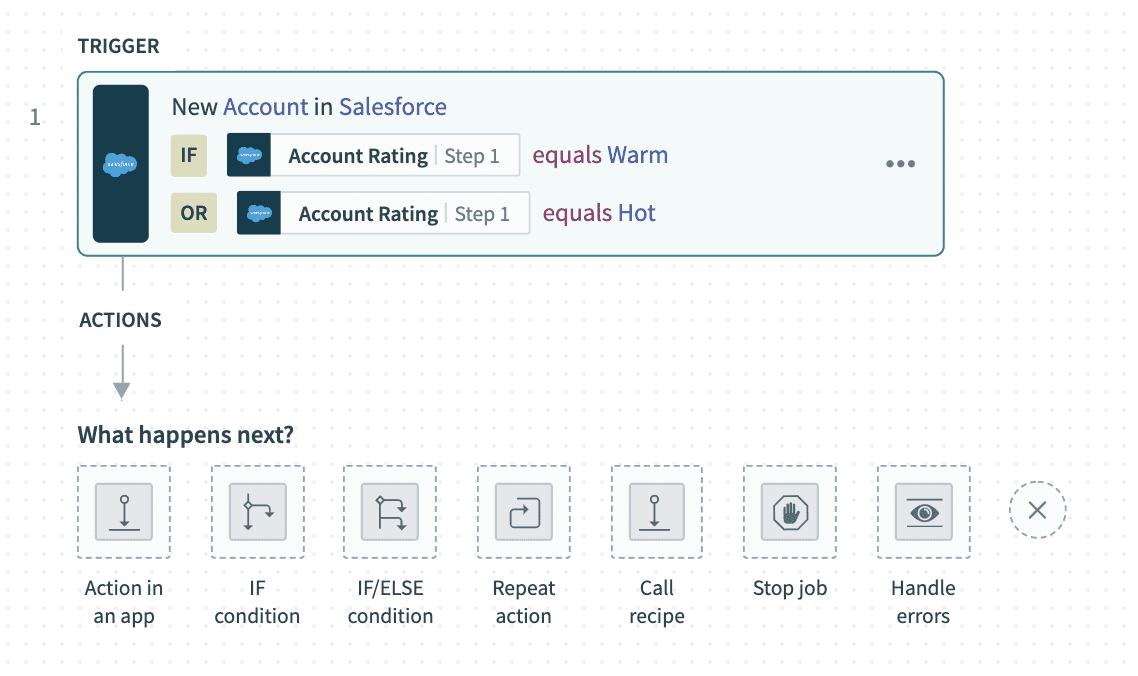 Actions carry out an operation in your target app, such as a create, update, or search operation. Each action requires a set of input fields and typically returns data i.e. output data tree.

The following step carries out a Search organizations action in a Zendesk integration. The input fields on the left shows the available fields to search for a Zendesk organization by:

In the following case, the Search organization action is carried out by name. 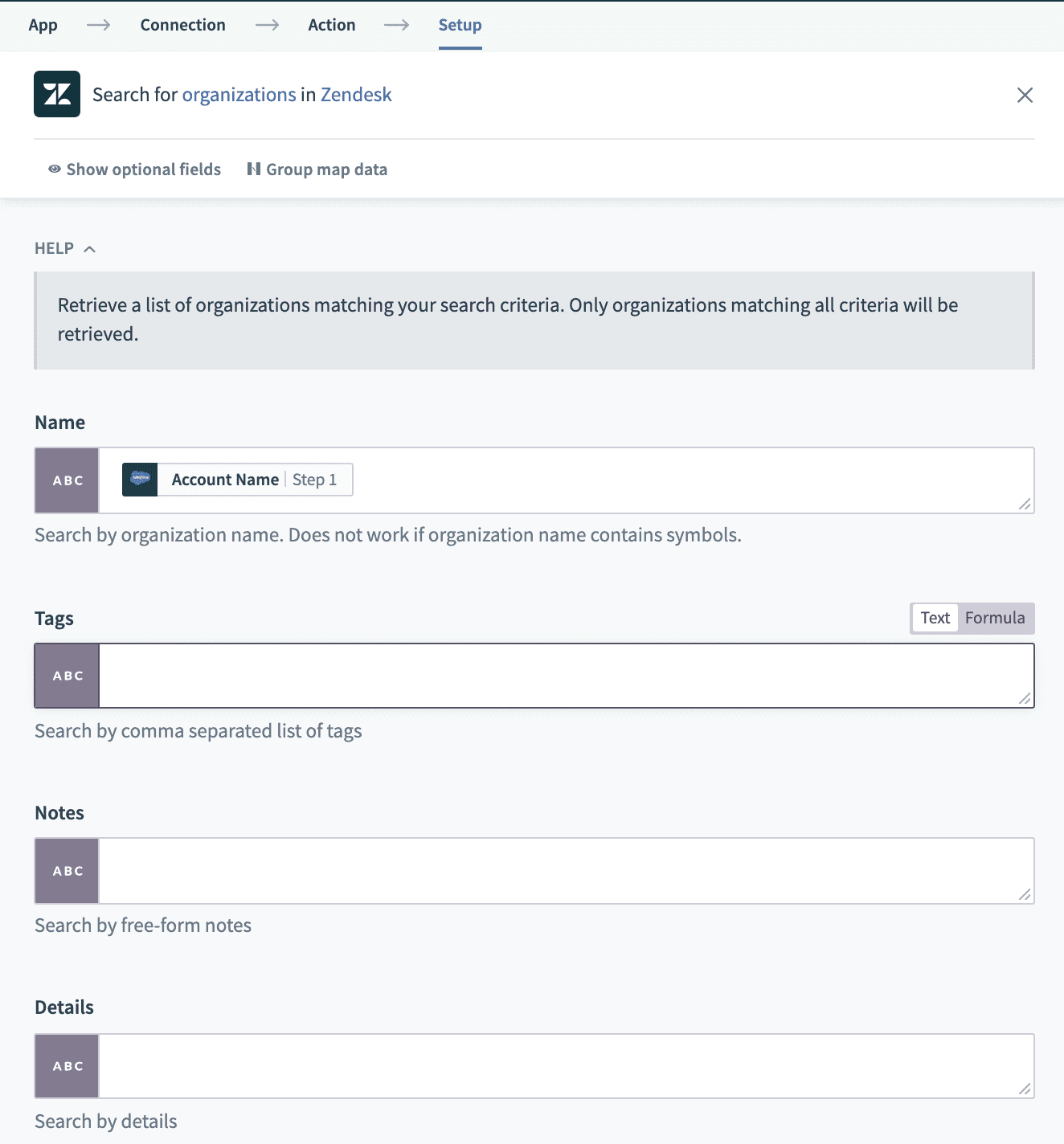 When the Search organizations action has been carried out, Zendesk returns data about the organizations found, if any. The output datatree displays available fields for mapping in subsequent steps.

In the following case, the Update organization action uses the ID field from the Search organizations action to identify which Zendesk organization to update (ID field as highlighted). 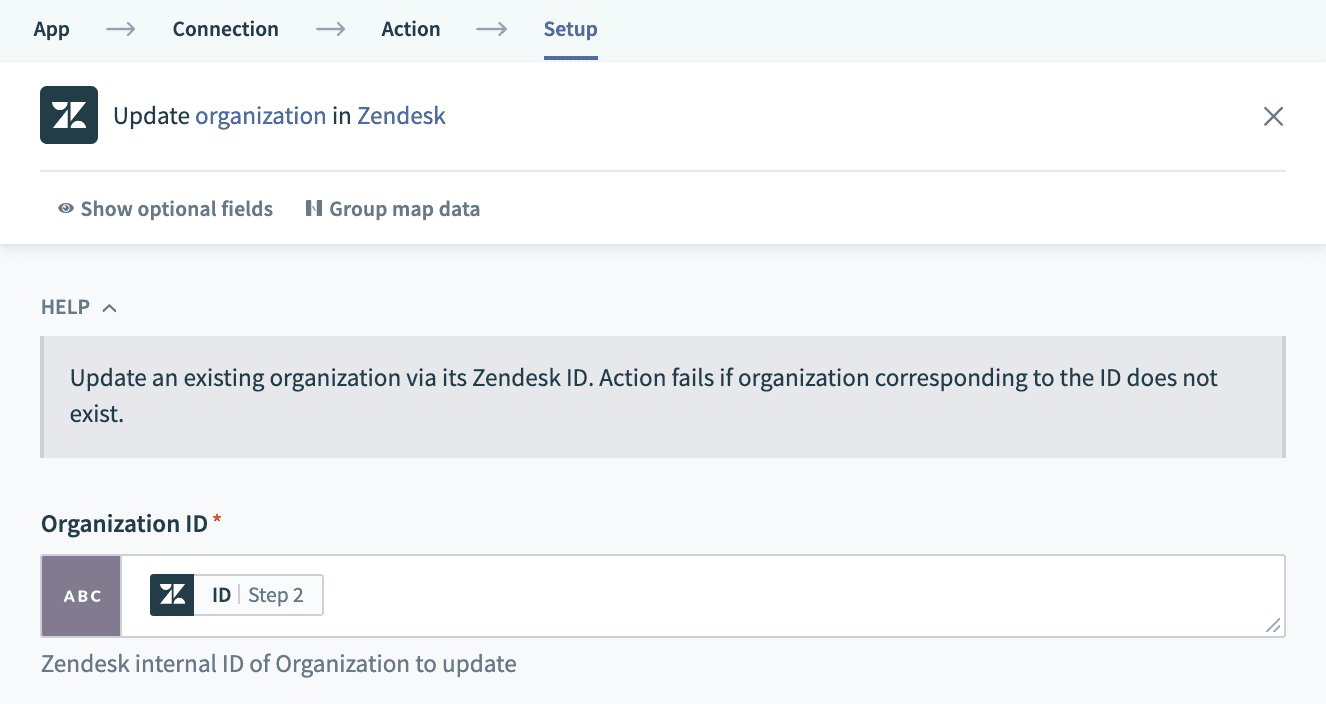 An IF condition step directs a recipe to run an action or set of actions if the specified condition is met. For example, the recipe in the screenshot below uses conditional steps to decide whether to create or update a Zendesk organization. 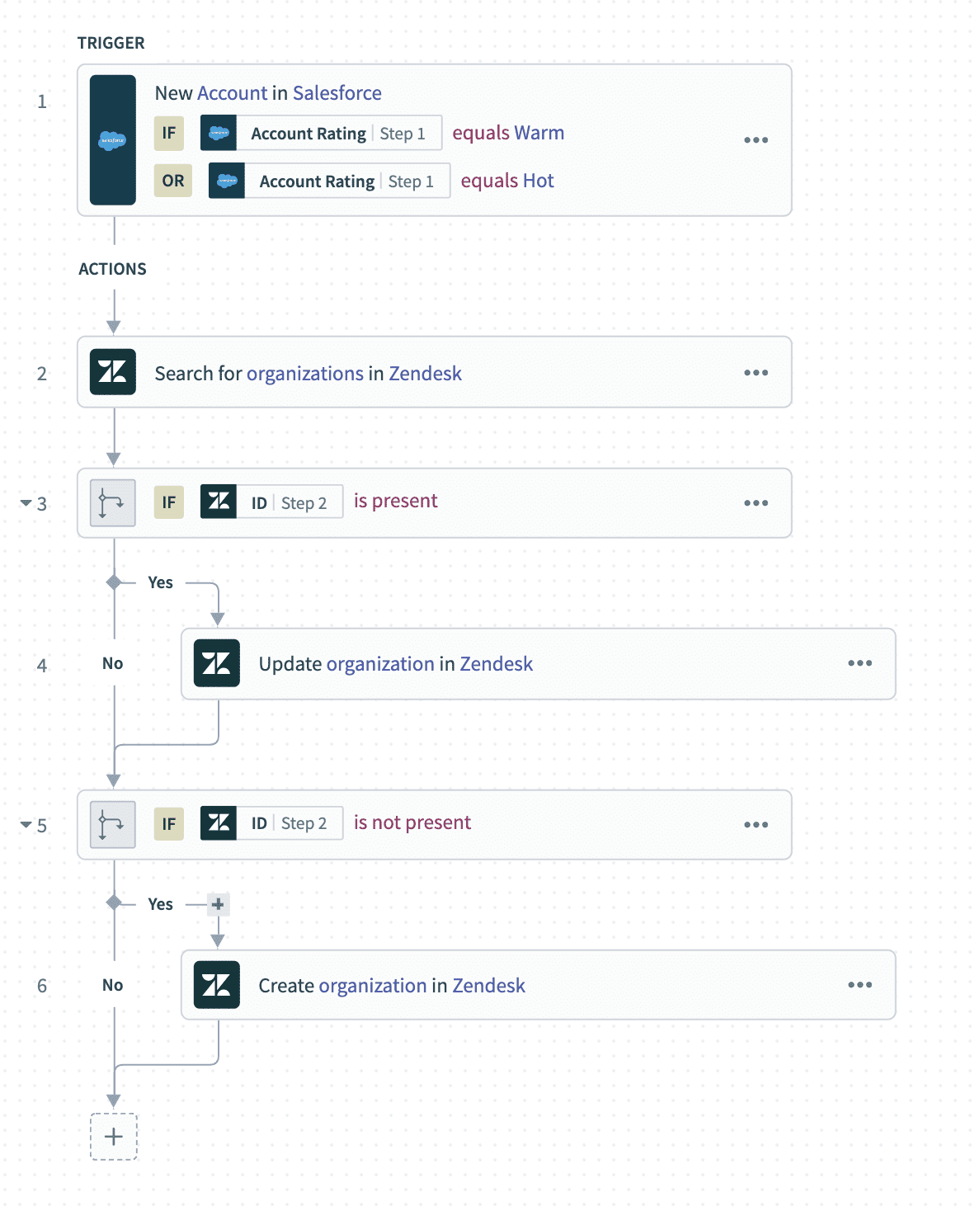 In this example, any job can only proceed through either one of the conditional steps, as the Zendesk organization must have either been found or not.

When working with a list of items (for example, a list of invoice line items), you may need to carry out a set of actions for every item in the list. The repeat step helps you do that. Actions indented within a repeat block will be carried out for all items in the list.

The input to the repeat step is a list. Actions within a repeat block should use data output from the Repeat step's datatree. This ensures that every item in the list is processed.

Refer to the example scenario of syncing Salesforce accounts (using the batch trigger) to Zendesk as organizations. 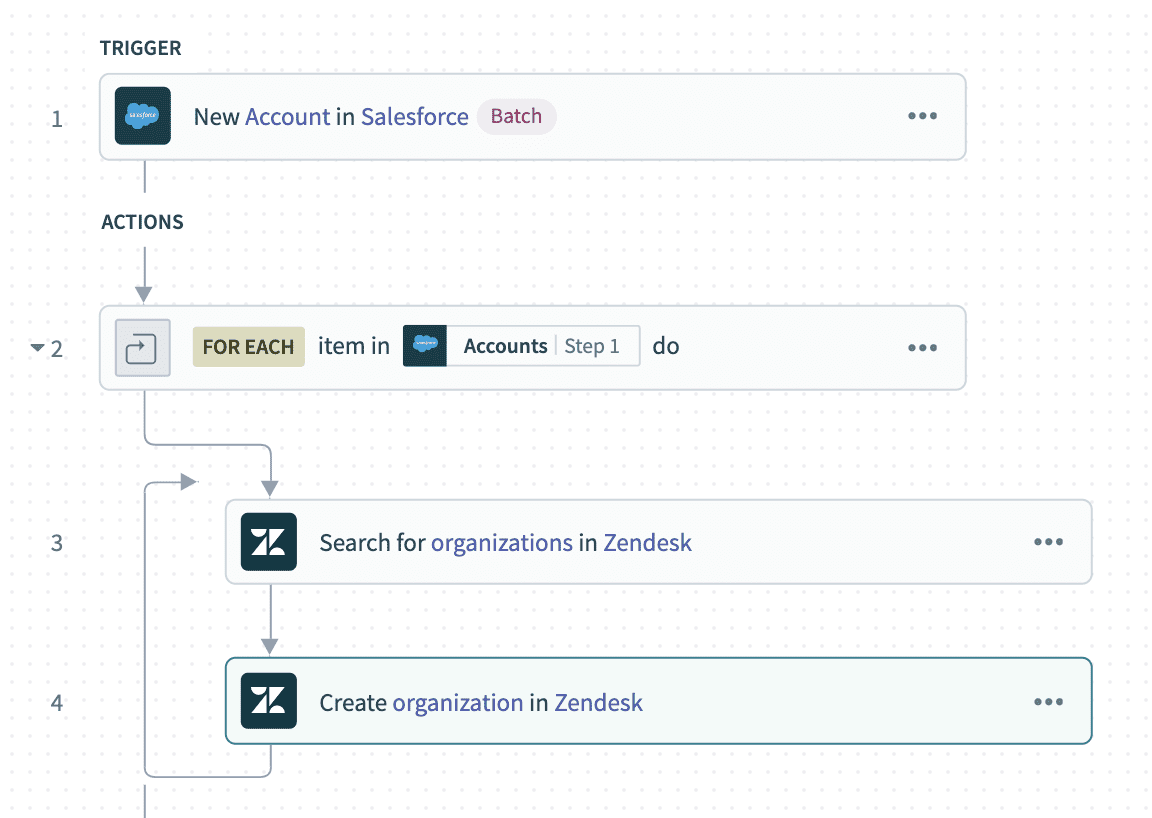 The list datapill has to be passed into the repeat step. When the input list field is selected, only list type datapills are usable in the datatree, as shown below. List type pills can be identified via their stack icon. 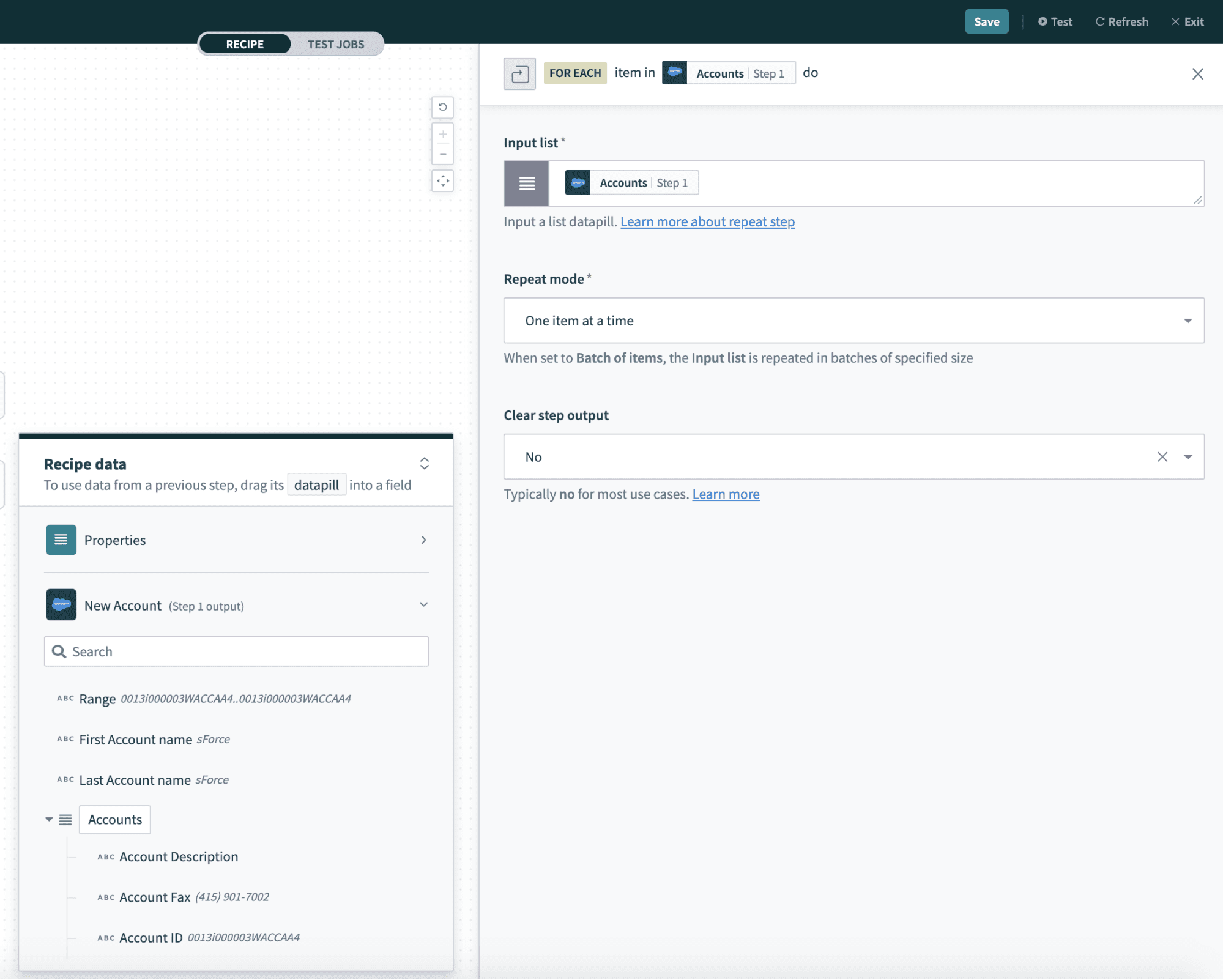 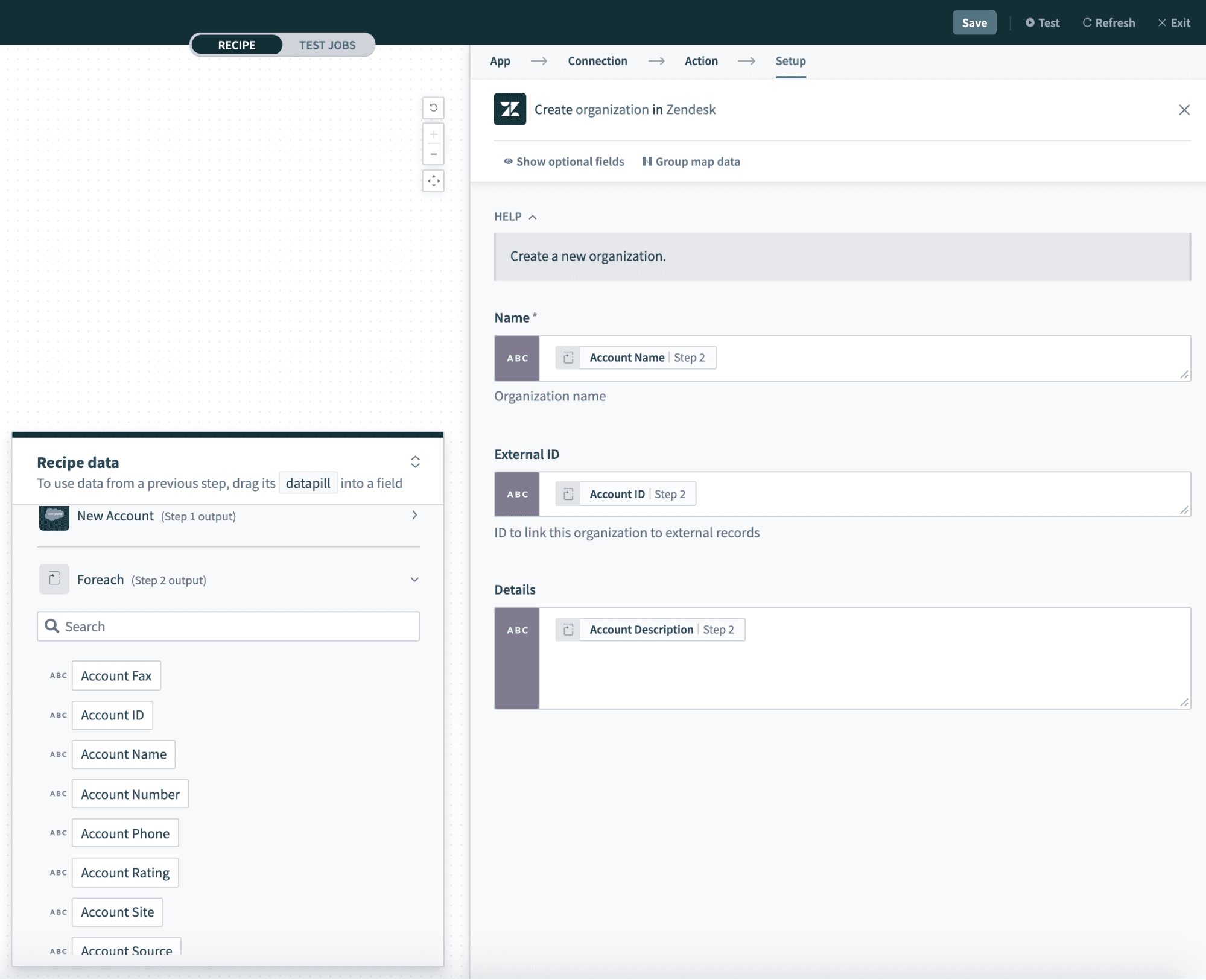 Using datapills from the Repeat step's datatree. This ensures values from the list being iterated through are used. Example recipe (opens new window)

The following displays the mapping from the Foreach datatree. 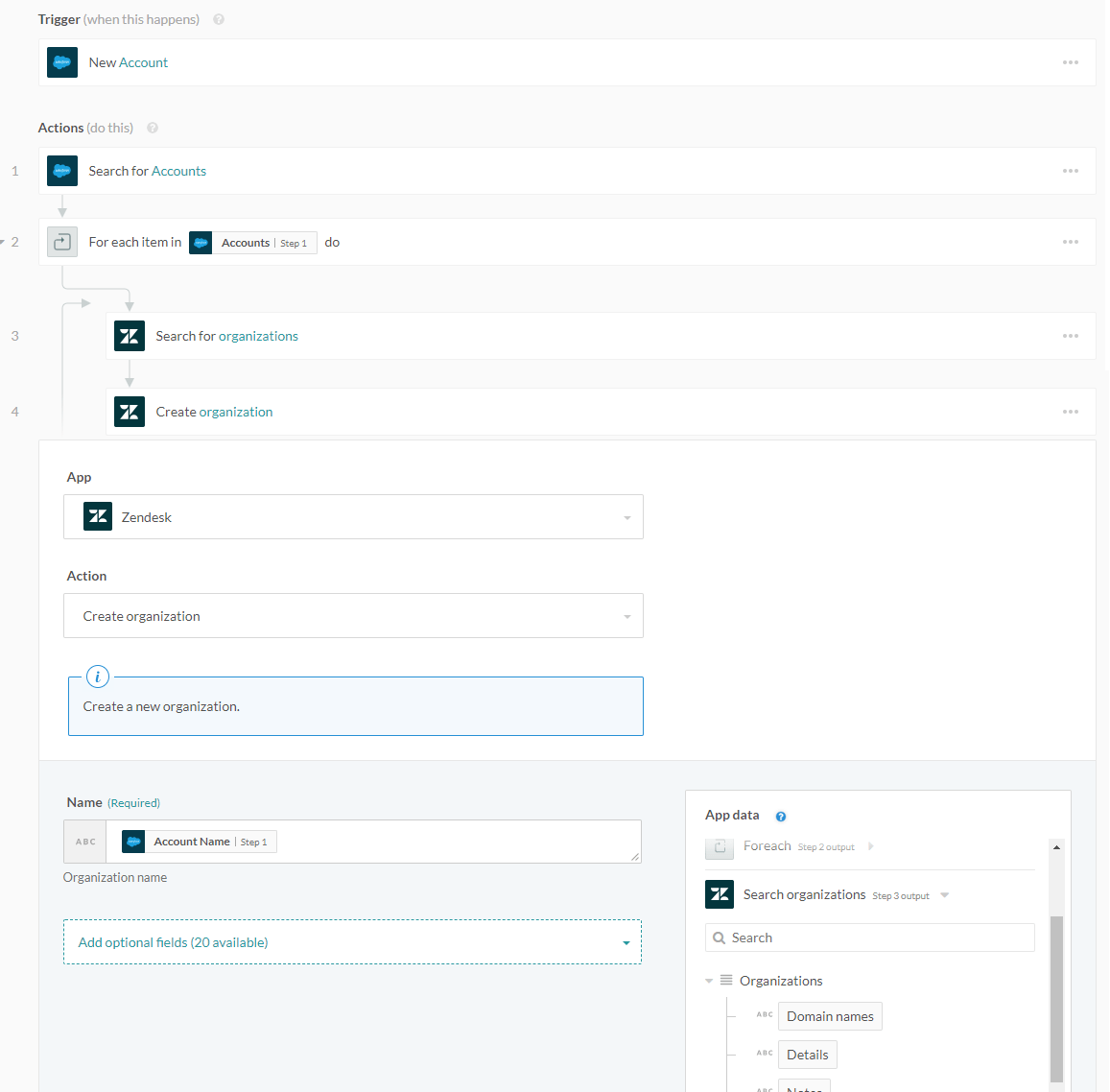 Follow these steps to use the Repeat in Batch feature: 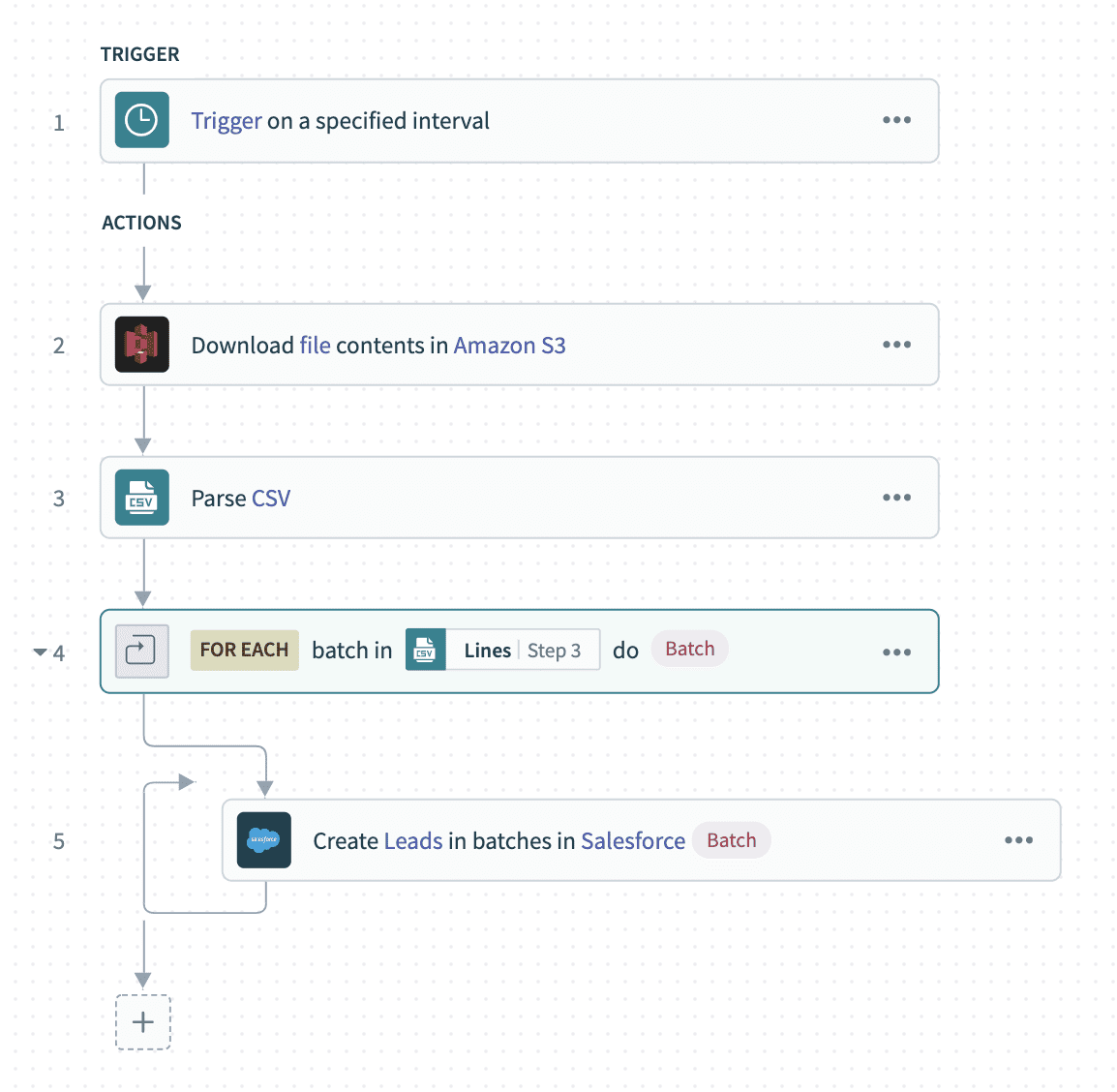 Using a Recipe Functions - Call Recipe Function action allows you to trigger another recipe. Called recipe functions, these types of recipes allow you to quickly and easily re-use recipe logic.

Refer to the Recipe Functions documentation for more info.

The stop step ends a single job from being processed any further. It is usually used in cases when there is a an error in the business logic and further processing of the job is not required.

The stop step can be configured to mark the job as a failed or a successful, depending on business logic.

The following recipe expects all Salesforce accounts to be present in Zendesk as organizations. In cases where no corresponding Zendesk organization is found, the recipe will stop processing further actions. 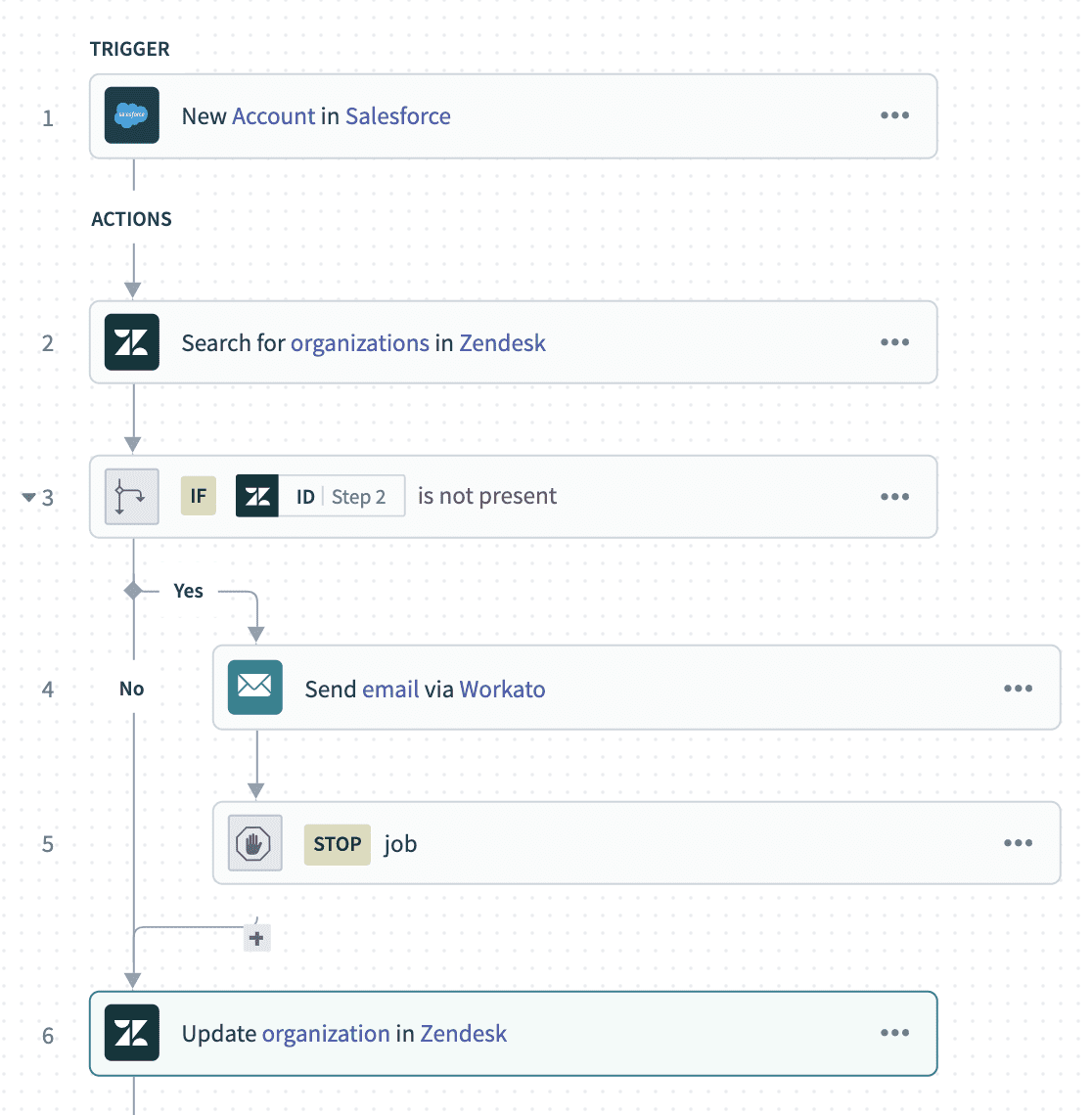 This recipe marks the job as an error, so that the recipe owner will take notice of this job and attempt to rerun it.

This step allows you to monitor for errors in actions, similar to the try/catch concept in programming languages. When an error occurs, you have the chance to: 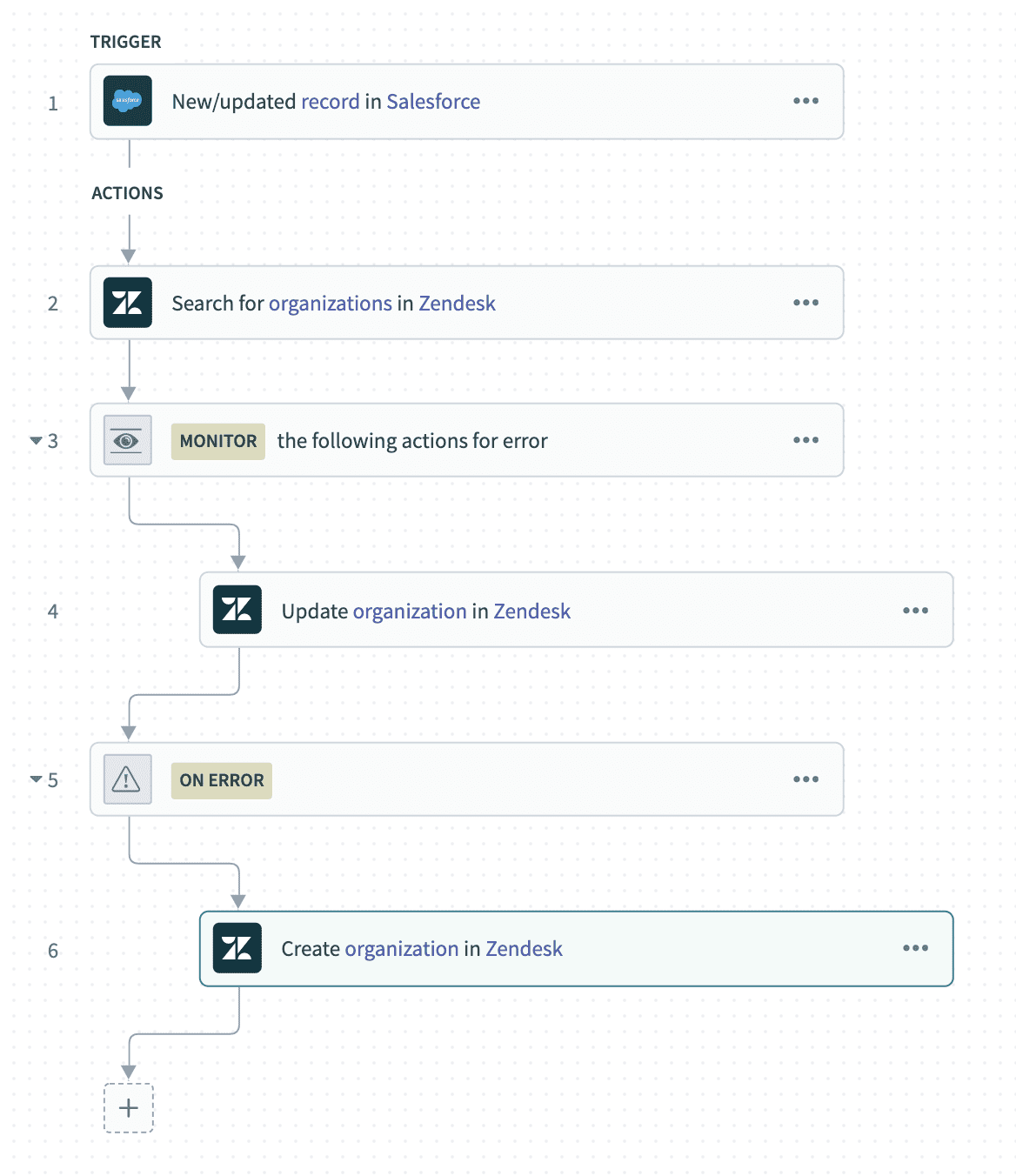 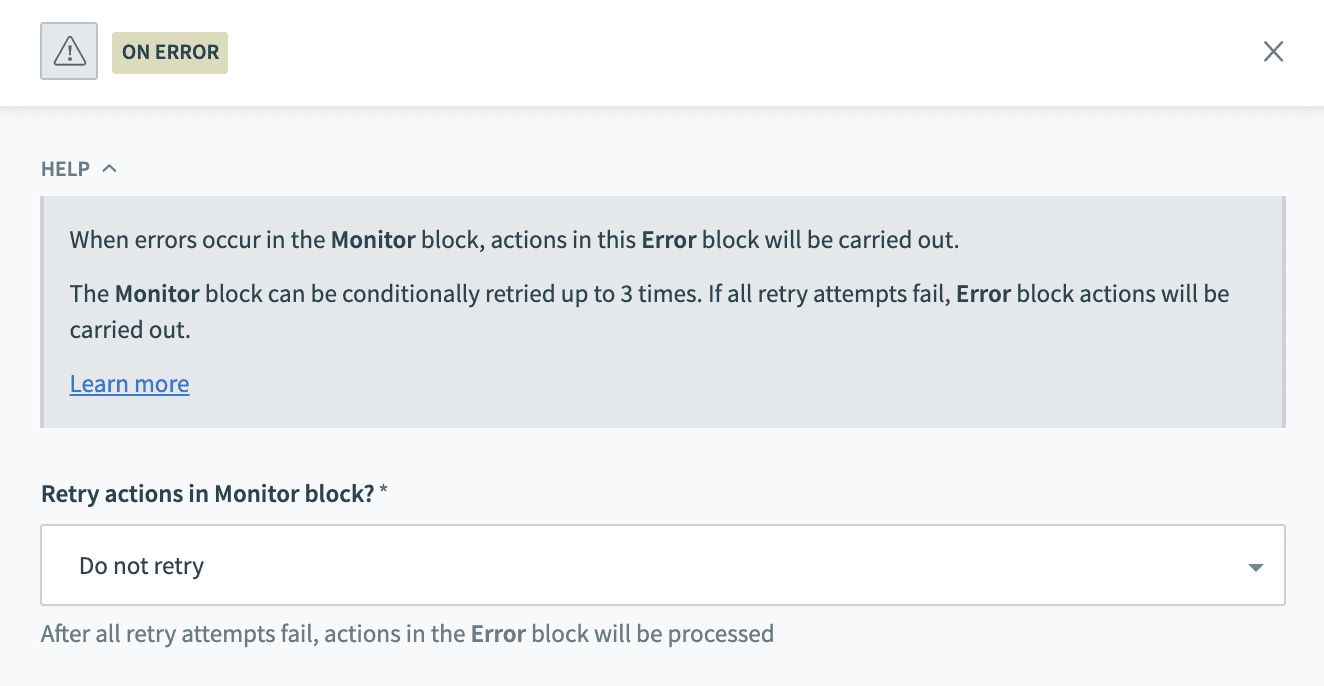 You have the option of retrying up to 3 times, and of selecting the time interval to wait between each retry. 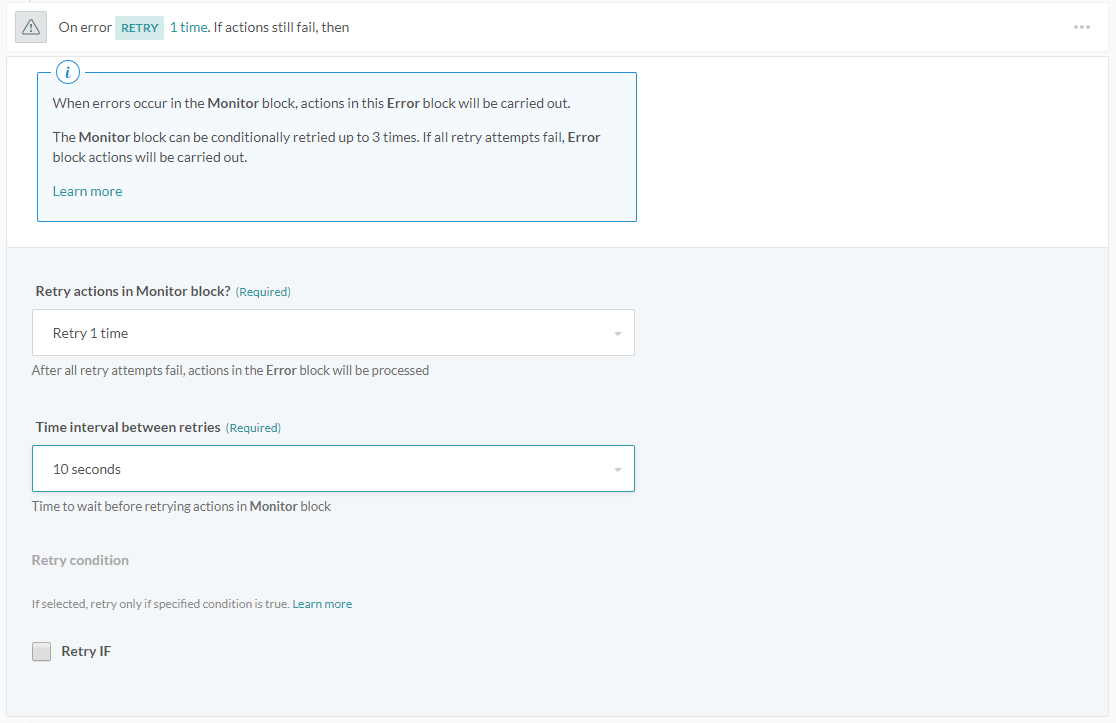 You can also define a condition that has to be met before the Monitor block can be auto-retried. For more information on the available conditions you can use, refer to the IF condition article. 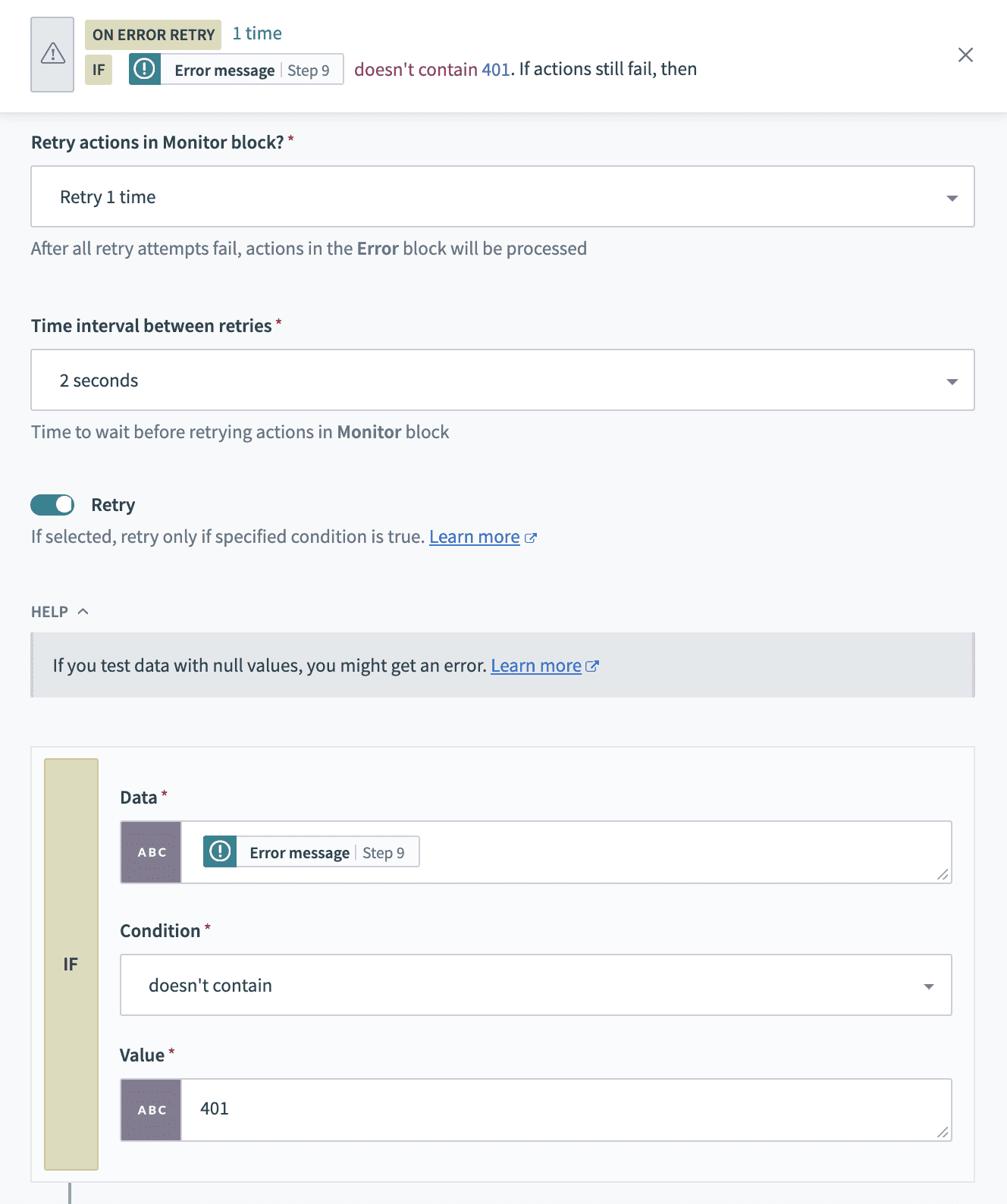 Configuring the retry condition field. In this example, the actions in the Monitor block will only be carried out again if the error message does not contain the 401 error code.

If the actions in your Monitor block tends to fail for temporary reasons such as network issues or timeout issues, it would make sense to use auto-retry, such that the recipe will attempt to execute the steps again until it succeeds, for a maximum of 3 tries. 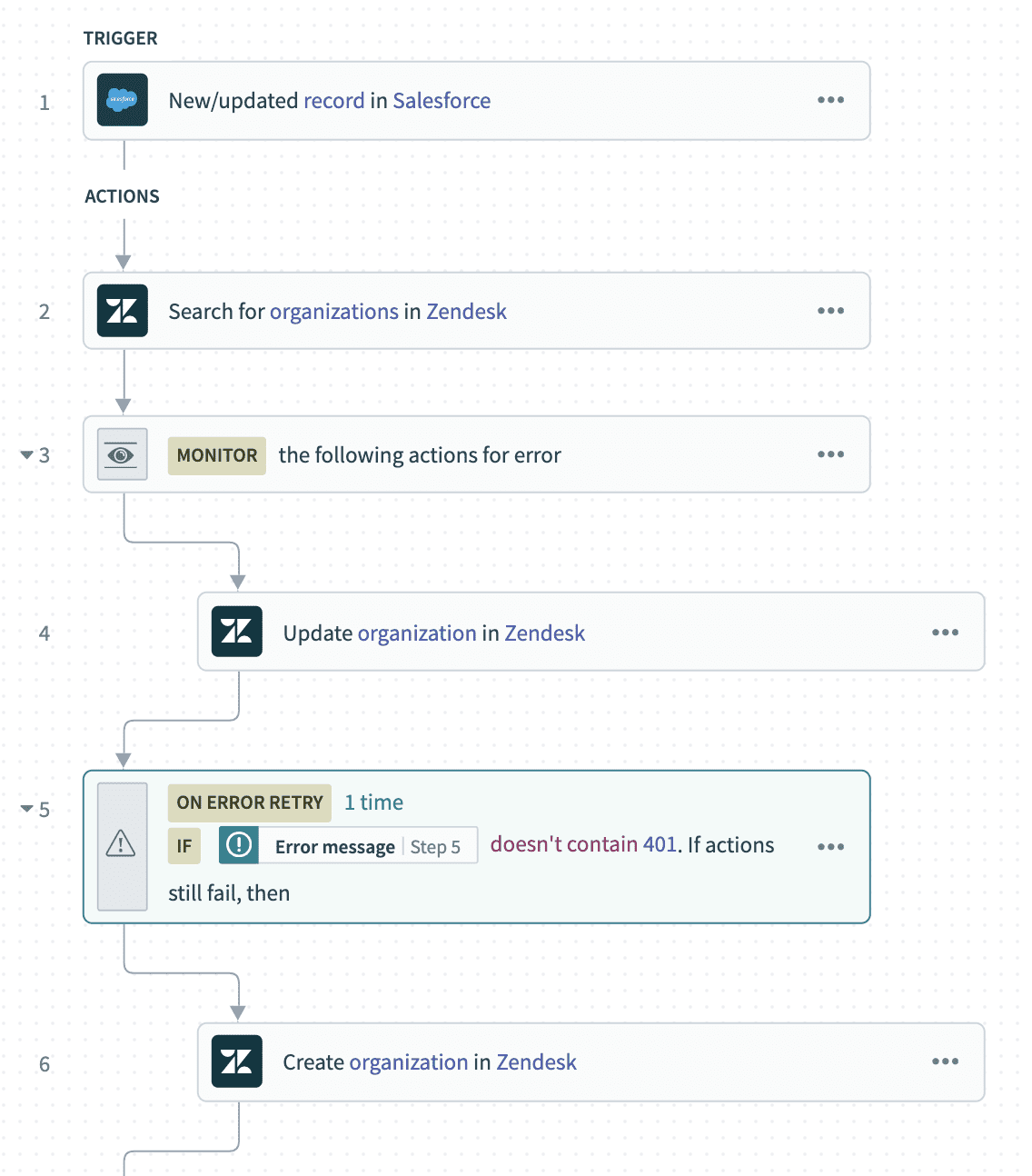