SAP is an enterprise resource planning software used by the largest corporations in the world.

Workato SAP On-premise connector allows you to connect with SAP system on-premises or on a server behind a corporate firewall. The connector supports using IDoc or RFC to communicate with SAP. Using Workato, you can build powerful automation around SAP and other applications, without writing a line of code.

The connector supports the following communication methods with SAP:

The term IDoc stands for intermediate document. It is simply a data container used to exchange information between SAP systems or between SAP and 3rd-party systems.

IDoc is an open interface which is independent of the internal data structure stored in SAP, and independent of sending or receiving applications. Any application can use IDoc by following the syntax and semantics of IDoc.

IDoc is independent of the direction of data exchange, having both Outbound and Inbound capabilities.

RFC is a SAP protocol that handles communications between SAP systems and third party applications. It is the process of calling a function module which is residing on a different machine from the caller program.

Workato can call SAP RFCs in an SAP system to fetch the data returned or make synchronous updates to the SAP data. RFCs can also be configured to leveraged to call Workato directly from your SAP instance. Find out how to set up an API endpoint on Workato and connect SAP directly to Workato here.

If you have trouble connecting to Workato via RFCs, please review the Troubleshooting section.

# How to connect to SAP On-premise on Workato

The SAP On-premise connector can connect to both on-premise SAP system and SAP system on a server behind the corporate firewall.

Please follow these steps strictly in this sequence to configure the connection:

If you encounter error at any step, please review the Troubleshooting section.

# Configure IDoc and RFC in SAP

# Step 1: Register a Program ID for Workato in SAPGUI

In SAP, use Transaction SM59 to create a new RFC Destination of type TCP/IP (type T). Select the TCP/IP Connection folder and select the create button. 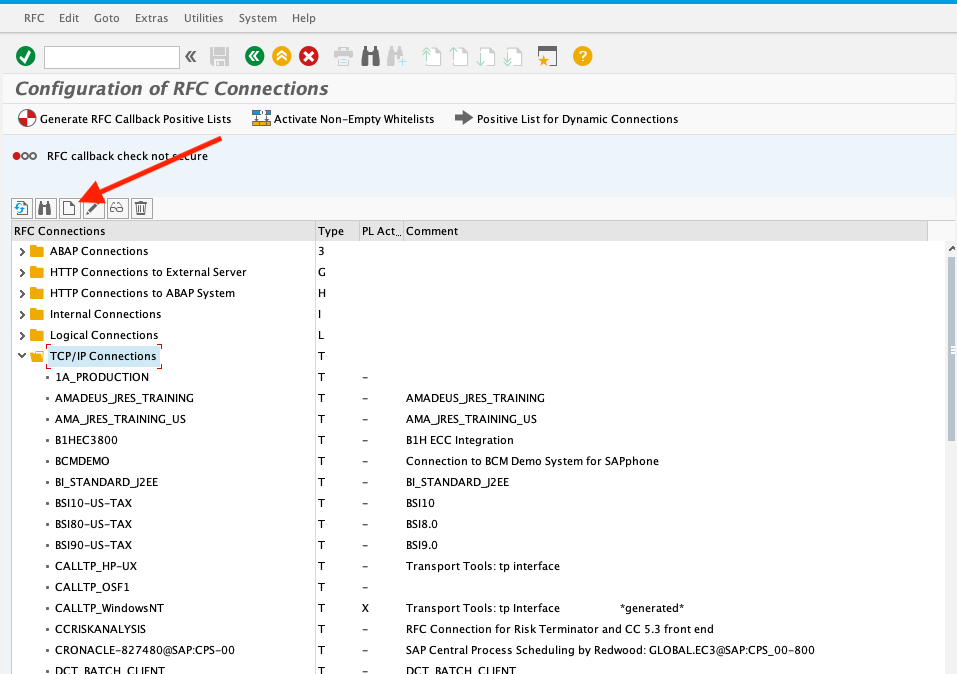 In the Technical Settings tab, select the Registered Server Program option and enter in WORKATO(Case sensitive) as the program ID. 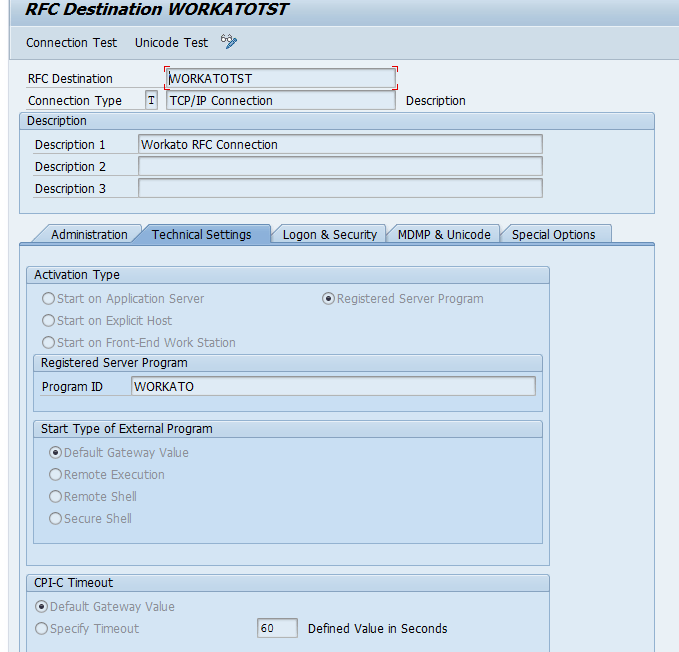 Proceed to the MDMP & Unicode or Unicode tab. Make sure that the communication type is set to Unicode. 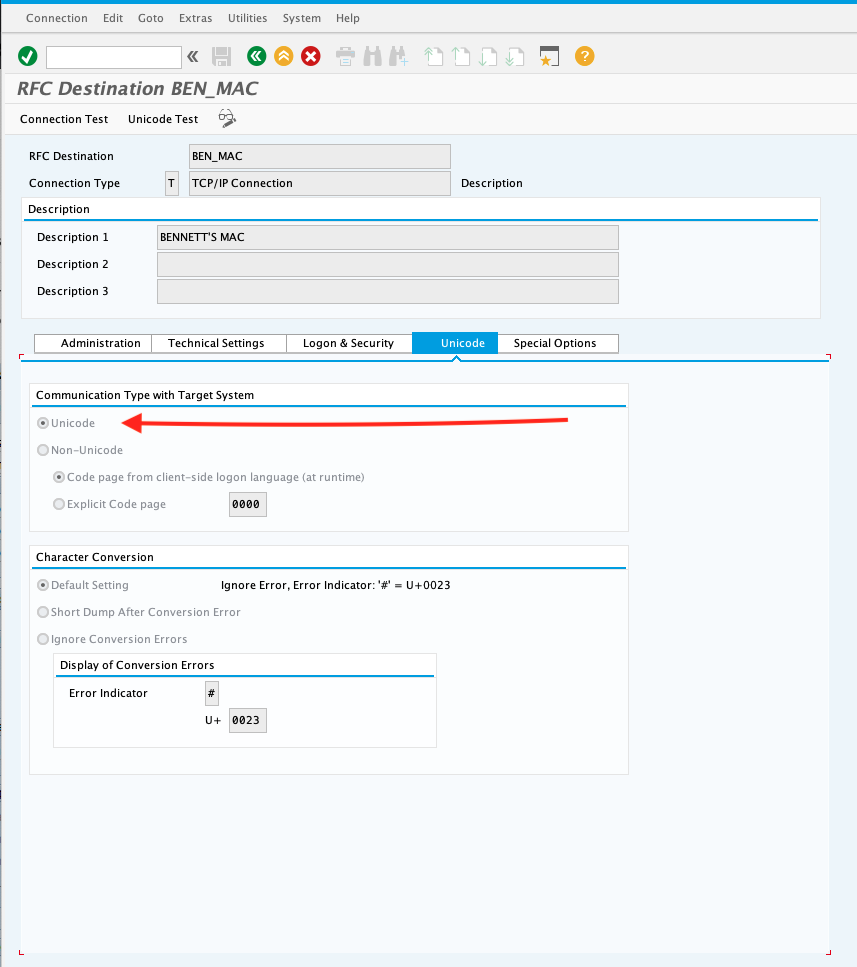 Save and you should see your newly created RFC destination. 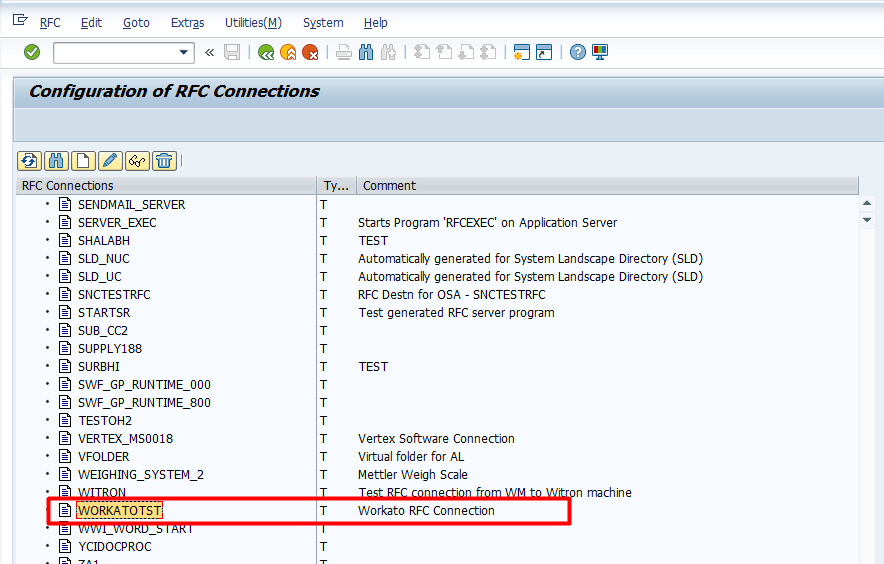 # Step 2: Define a port for Workato

Use the transaction WE21 to define a port for sending and receiving IDocs of type Transactional RFC. 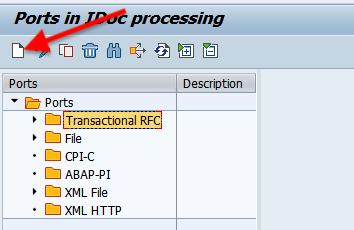 If you have no plans to use IDocs but only RFCs, you may skip along to step 6 where we show you how to configure Workato's OPA. 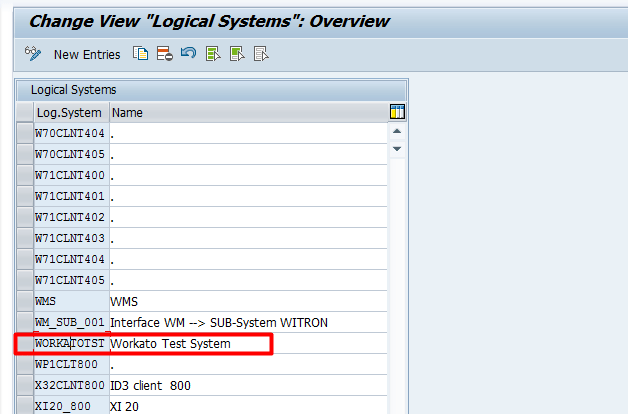 Create a partner profile of type Logical System and provide the same name as the Logical System. In this configuration, you define the Message types that you want to be sent and received from Workato system.

Important Note: Only the Message types configured here will be available to use in Workato recipes. 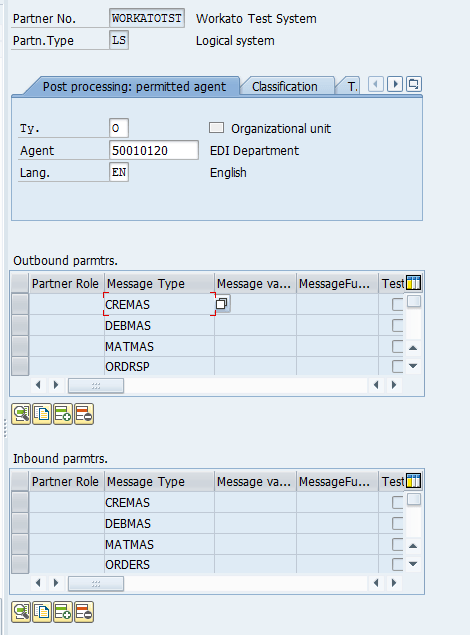 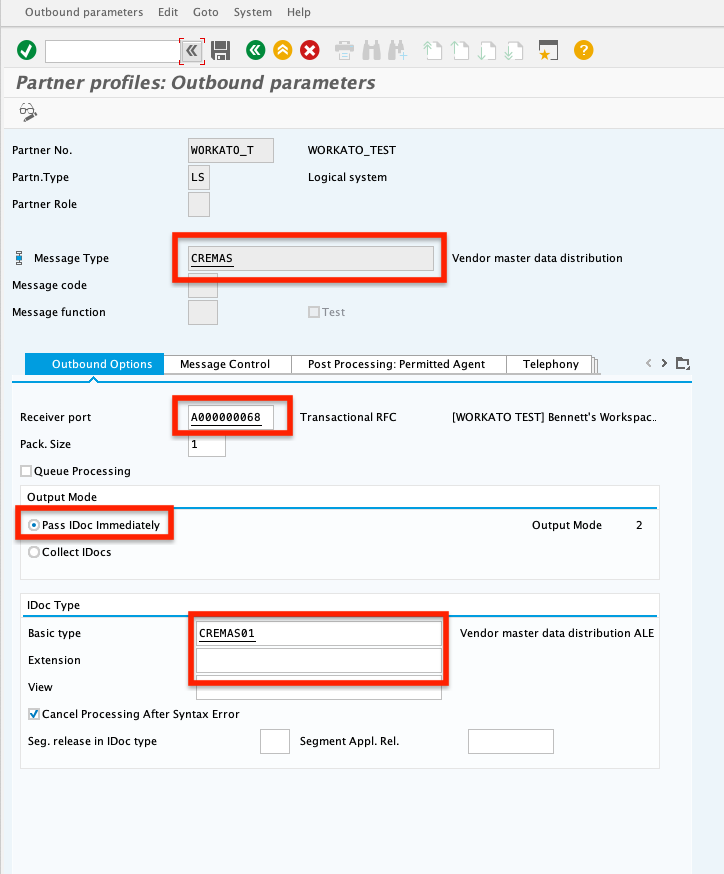 When prompted for your receiver port, provide the same port that was defined earlier on in step 2 and remember to toggle Output Mode to "Pass IDoc immediately".

# Step 5: Create a distribution model for the partner and message type which will be interfaced with Workato

Use Transaction BD64 to create a Distribution Model for the IDocs which need to be interfaced with Workato system. The direction of flow for the IDocs are configured in this transaction based on the attributes Sender, Receiver and Message type.

The below configuration in the distribution model will enable SAP to send DEBMAS IDOCs to Workato. A Workato recipe will receive them using the New IDoc trigger. 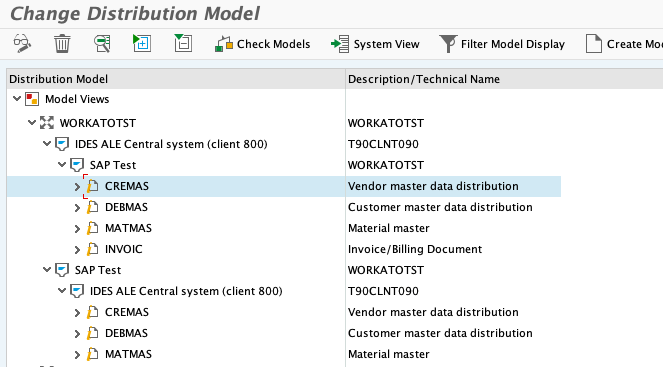 There should be separate entries for each inbound and outbound IDoc registerd on your partner profile in WE20. In the example above, the image showcases under the model view, WORKATO Test System Model, that:

No filters are needed.

To begin, you'll first need to create a user in your SAP system which is dedicated to Workato. This user will be used later on with the minimum required permissions to run your integrations. In t-code SU01, give the new user a name that is relevant to Workato. In the example below, we have named the user WORKATO_INT. When creating a user, you will need to provide a Last name as well as well as password(located in the Logon Data tab). 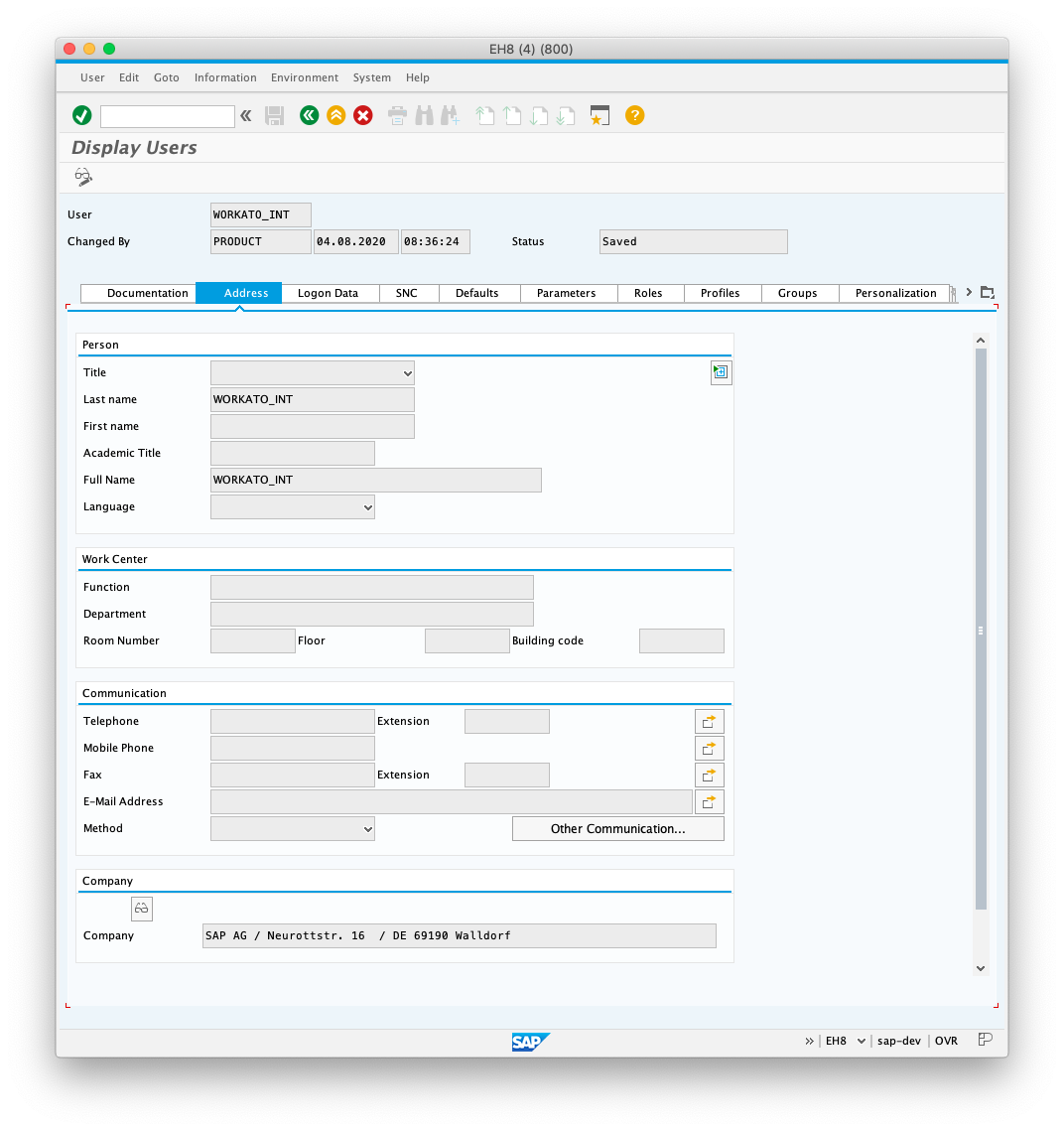 After creating your new user, you will need to activate this user by logging in as this user and changing the password. Take note of both the password and the username as this will be required when setting up your OPA in Workato.

We now need to assign a role to this newly created user. This role will grant to only specific objects in your SAP system. For the sake of demonstration, we will go through the minimum required authorisations needed to connect to SAP from Workato. This does not include authorisations needed to run any RFCs, receive IDOCS and send any IDOCs which are needed for the connector

Head over to the t-code PFCG and type in the role which should be assigned to this Workato user. In our example, we have named it Z_WORKATO_MIN_AUTH. Click on the Single Role button after providing your chosen name. 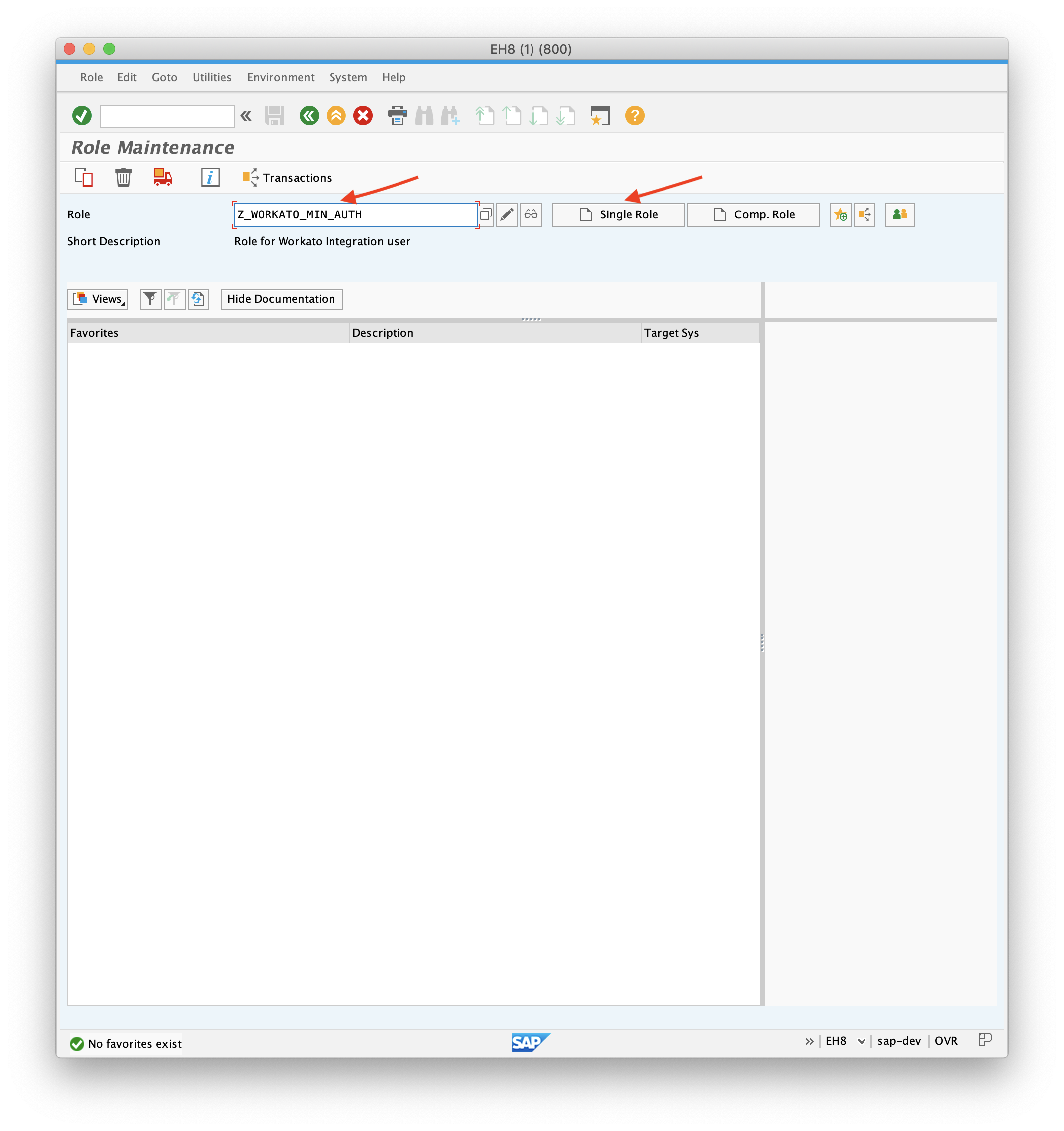 Give a description for your new role and head over to the Authorizations tab. Generate a profile by click on the button next to the Profile Name input field. Once generated, click on Change Authorization Data. You will need to give the following permissions which help the Workato connector with Authentication and reading metadata from your SAP system. You can do so by adding maintaining the role manually (button located in top section). 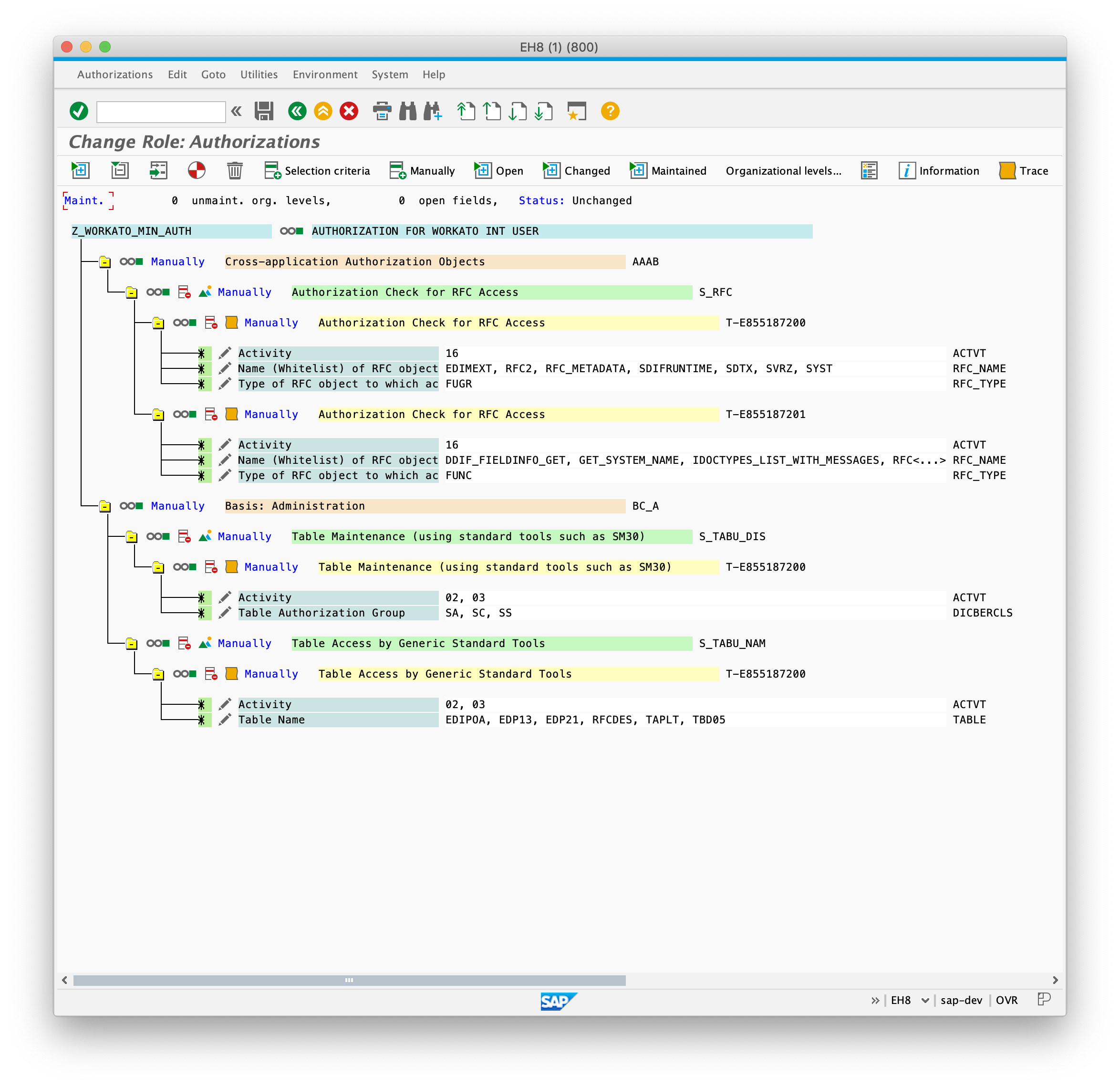 Press the generate button (the white and red circular button in your top bar) to saved your Authorization.

# Step 9: Link your user to your newly created role

Head over to SU01 and edit the user you created earlier. Head over to the Roles tab and provide an Assignment to the role you have just created. Click save. 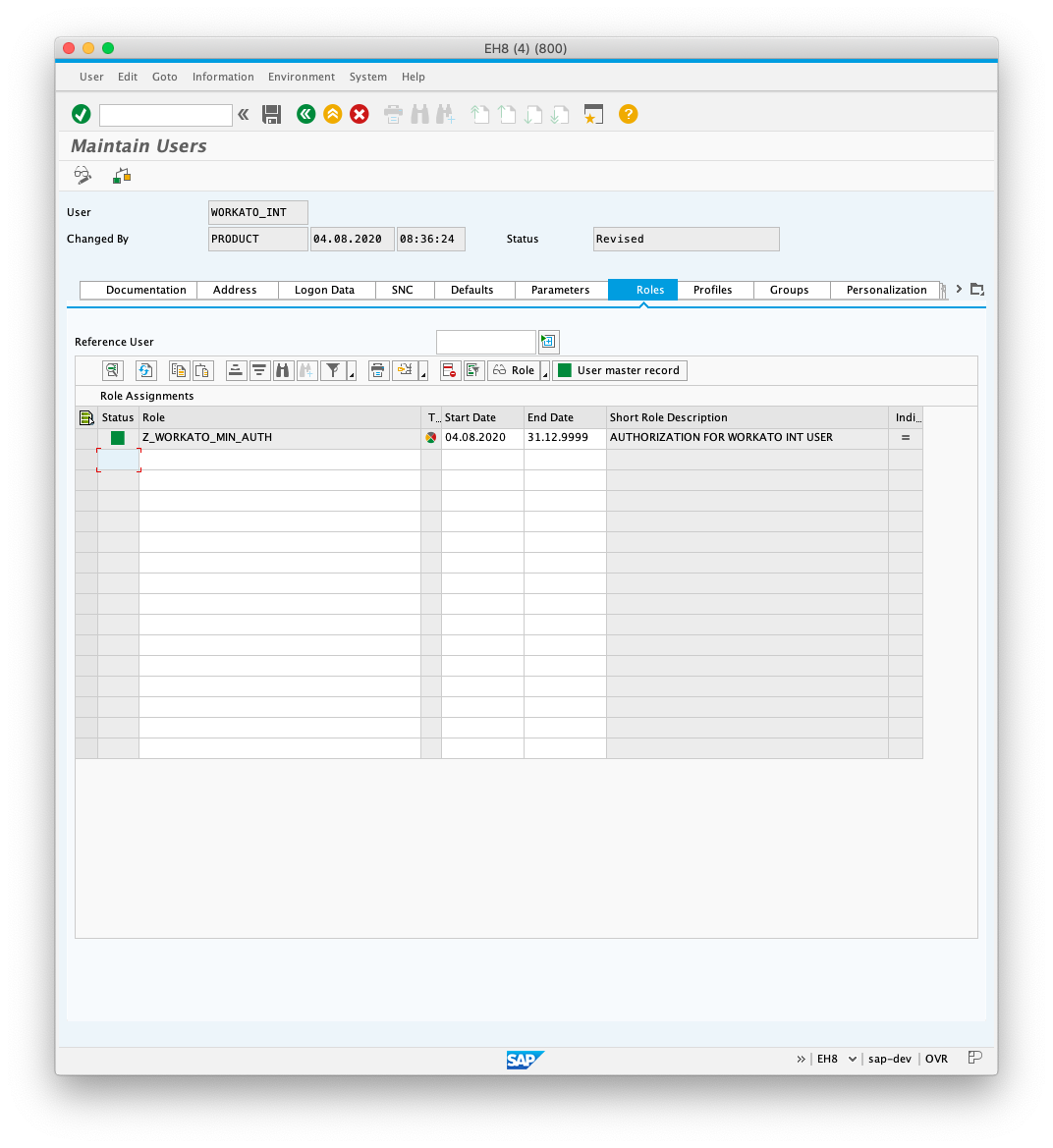 For Workato to talk to SAP, you need to install a Workato On-prem Agent (OPA) on your SAP server, or on a separate Virtual Machine that can reach your SAP server.

The Virtual Machine server and your SAP server need to be in the same domain, not outside of the firewall, and able to access each other (From each server, try to ping the other server to make sure they can reach each other).

If you do not already have a license to use SAP JCo libraries, please contact your SAP provider for license.

Please ensure that the correct Operating system is selected.

Once the libraries are downloaded, place them in the lib_ext/ directory of the OPA.

Follow these instructions to create a SAP profile in OPA.

Follow these instructions to run the OPA. After it successfully runs, you can move on to set up the SAP connector in Workato.

# Step 14: Connect to SAP from Workato

There are 2 ways to create a connection in Workato. Click on App Connections on the navigation bar and then on Create a new connection; or click on the Connections tab in a recipe with SAP triggers/actions. Then, follow the steps below:

To help you along the way, here are the some of the permissions you would need for our actions:

For run RFC action Unfortunately, the authorisations depend largely on the RFC chosen and its parameters as well. To this end, we would suggest using ST01 to find the absolute minimum permissions required. You can use t-code ST01 to set up a trace. Select Authorization check and also provide the user name of the Workato user in General filters. 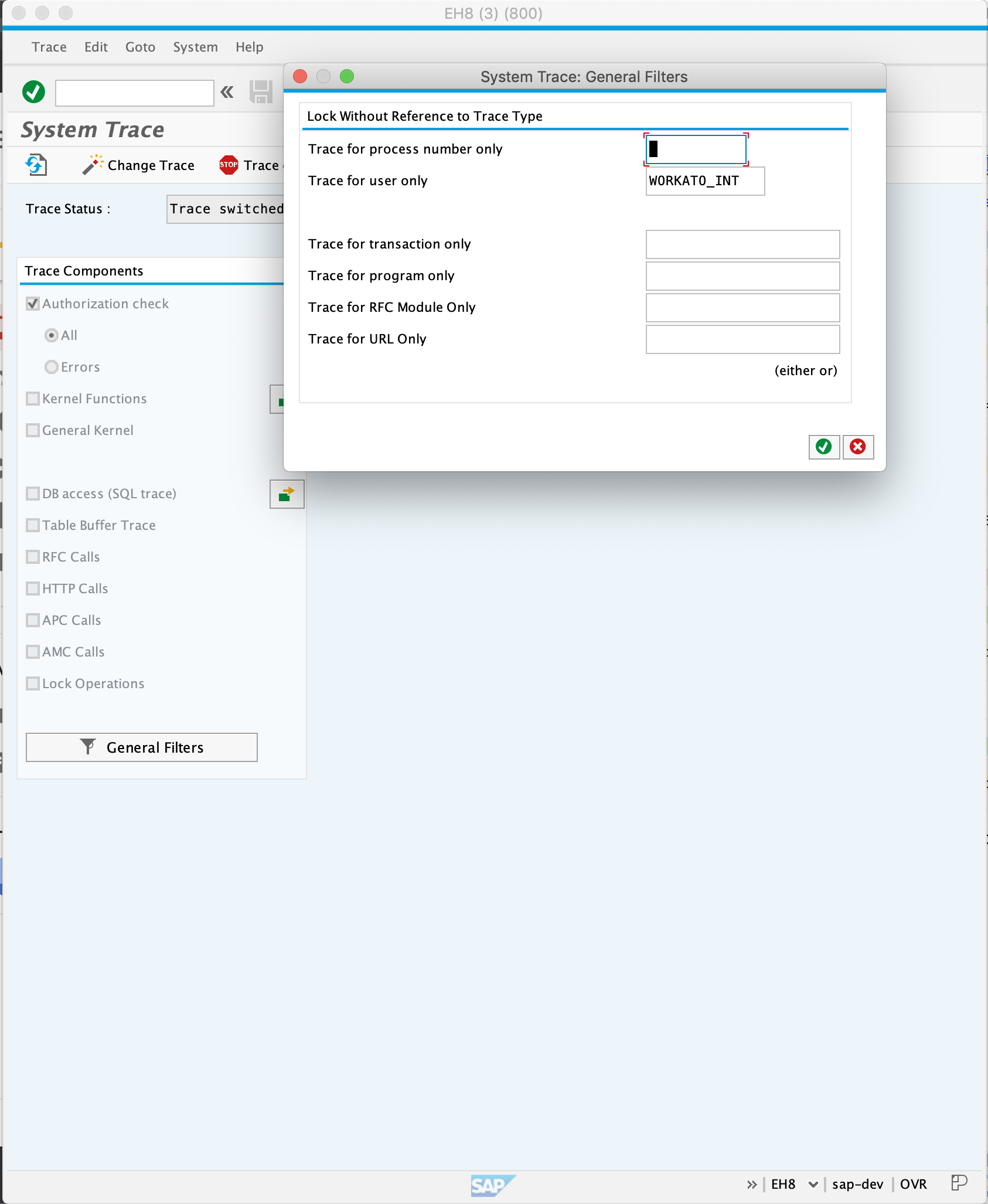 Turn your trace on by selecting Trace On in the top bar. After this, get your OPA live and begin to attempt to run the triggers and actions. With only the minimum permissions set out to create the integration user, you should hit errors. You can observe the authorization errors by selecting Analysis in the top nav bar.

Select display and you should see where your permissions have failed. Add these permissions to the Authorization role you should have created for Workato earlier. Below, we have an example of how to read the Trace display to know what additional authorisations are needed.

Don't forget to turn your trace off when you are done! This is done by selecting Trace Off in t-code ST01.

The followings are issues you may encounter during your setup. This list is constantly being updated. If you don't find your issue listed here, please contact Workato Support.

After clicking Link your account in Workato, it fails to connect

My OPA raises an error when attempting to connect to SAP. Check the logs of your OPA to know more.

This error also shows on Mac OS systems if you have no imported the libsapjco3.jnilib into the lib_ext folder.

For Mac users, there is no need to move the SAPConnector.jar to the lib_ext folder. Doing so will cause errors.

After clicking Link your account in Workato, it fails to connect This is often due to incorrect OPA configuration. Please check the SAP profile in the OPA's config.yml file for these errors:

You need to configure the needed IDoc in your SAP first, before it can be displayed in the dropdown list in Workato.

I am unable to call Workato's API platform via RFC

You may need additional configuration on your SAP system to enable TLS 1.2 if this hasn't been done already. Incoming web traffic to Workato is required TLS 1.2 encryption to better secure any information. Find out how to enable TLS 1.2 and establish a connection to Workato here.