Workbot actions allow you to post messages & replies to users or channels as Workbot.

The Post reply actions allow you to post a message back to a user when a Workbot command is invoked. Replies are posted directly to the user or in-channel, depending on where the command was invoked. 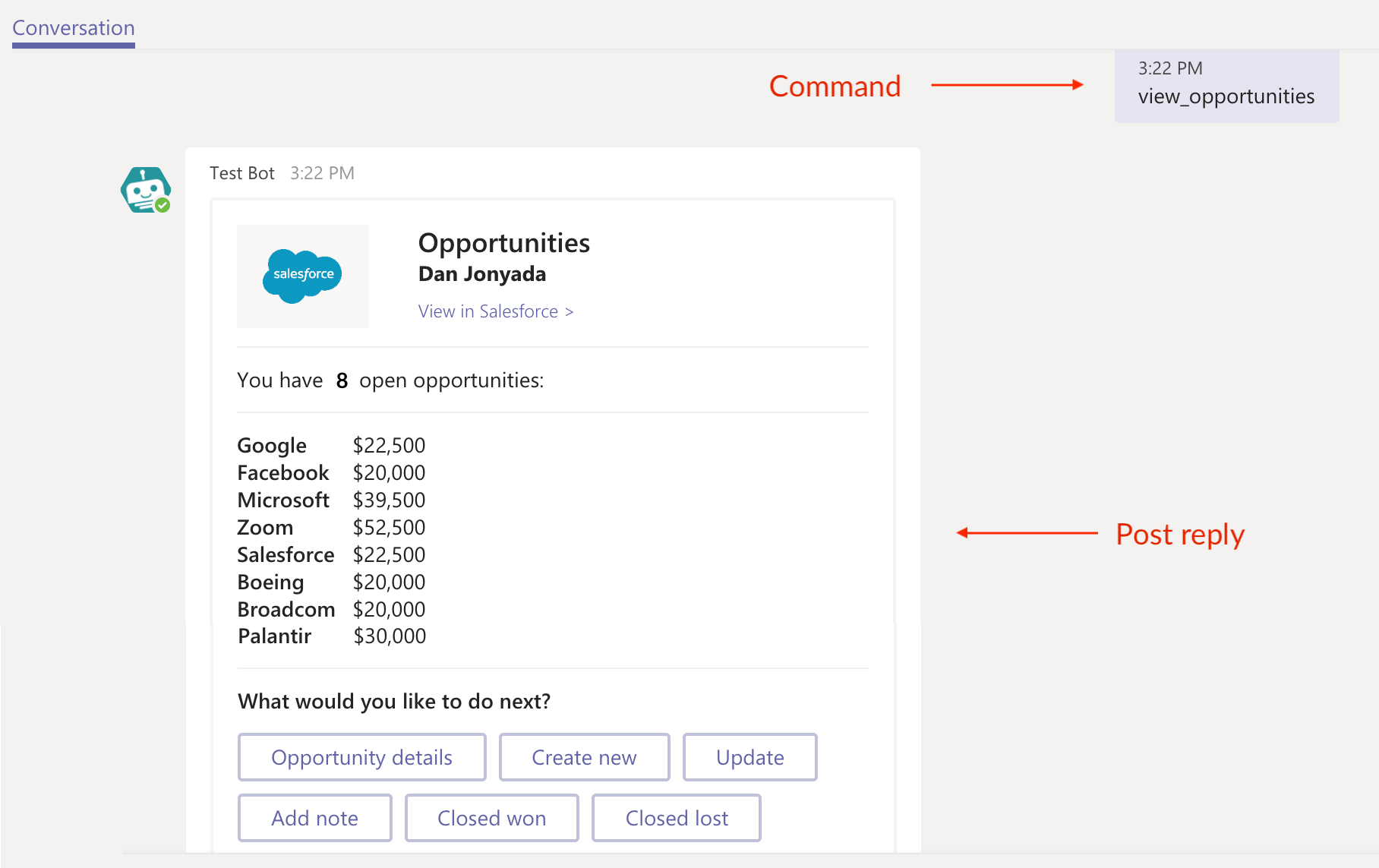 Example of a post reply listing open opportunities from Salesforce

This reply can be a simple text message about a task's completion, or more advanced like prompting users on subsequent actions.

You can optionally include 1 fact set (a set of name-value pairs), 1 picklist, buttons, and images.

Post reply must always be paired with a Workbot command. 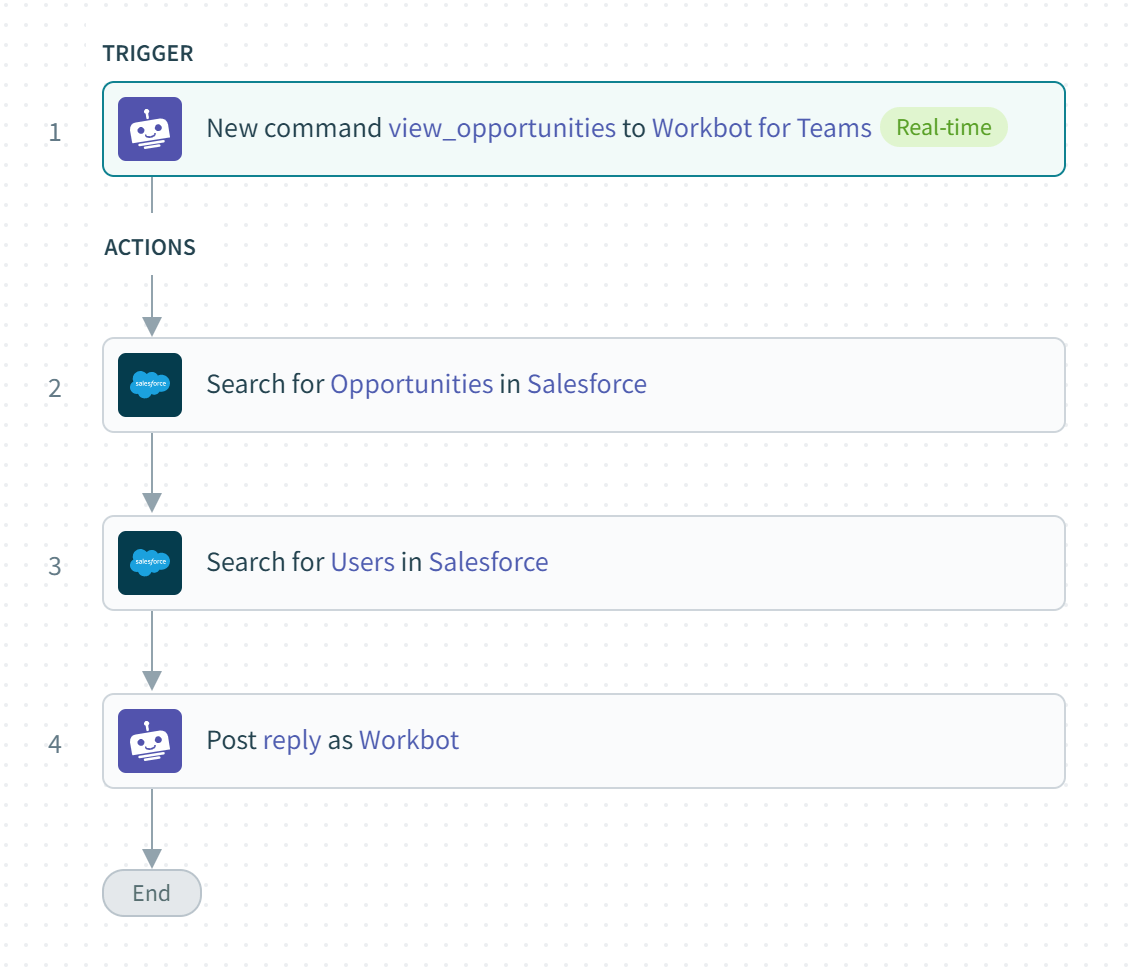 The post message actions allow you to post a message to a user or a channel. It is similar to Post reply, but with an additional field called Message recipient. This field allows you to specify where to post the message (direct to the user, or channel).

Message recipient allows you to post a message directly to a user or to a channel you specify. To dynamically assign message recipients at runtime, toggle to custom value and use the ID datapill (under Conversation) from the output of a Workbot command (if the recipe uses a bot command).

For all other triggers, use the ID datapill from the output of a preceding Get user info by User Principal Name action. 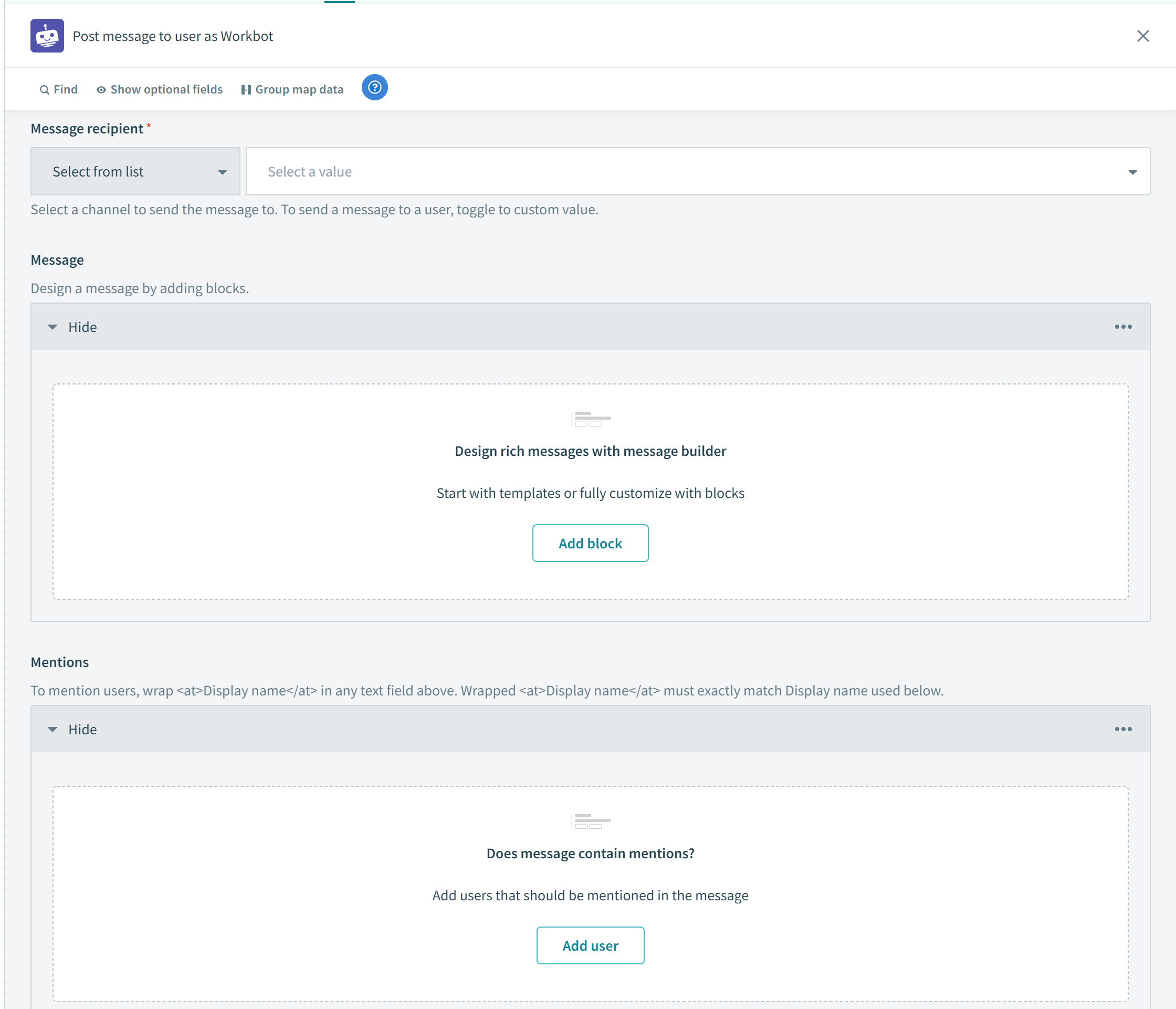 The table below lists the input fields in the post reply action.

You can mention multiple users in your bot message. To mention users, add them in the mentions section, then reference them in the message itself. Mentions work on the Post message and Post reply actions only.

This field is for advanced users who want to fully customize the message formatting. When set to Yes, all other fields will be hidden. Should include "type": "message", followed by "attachments", for example, 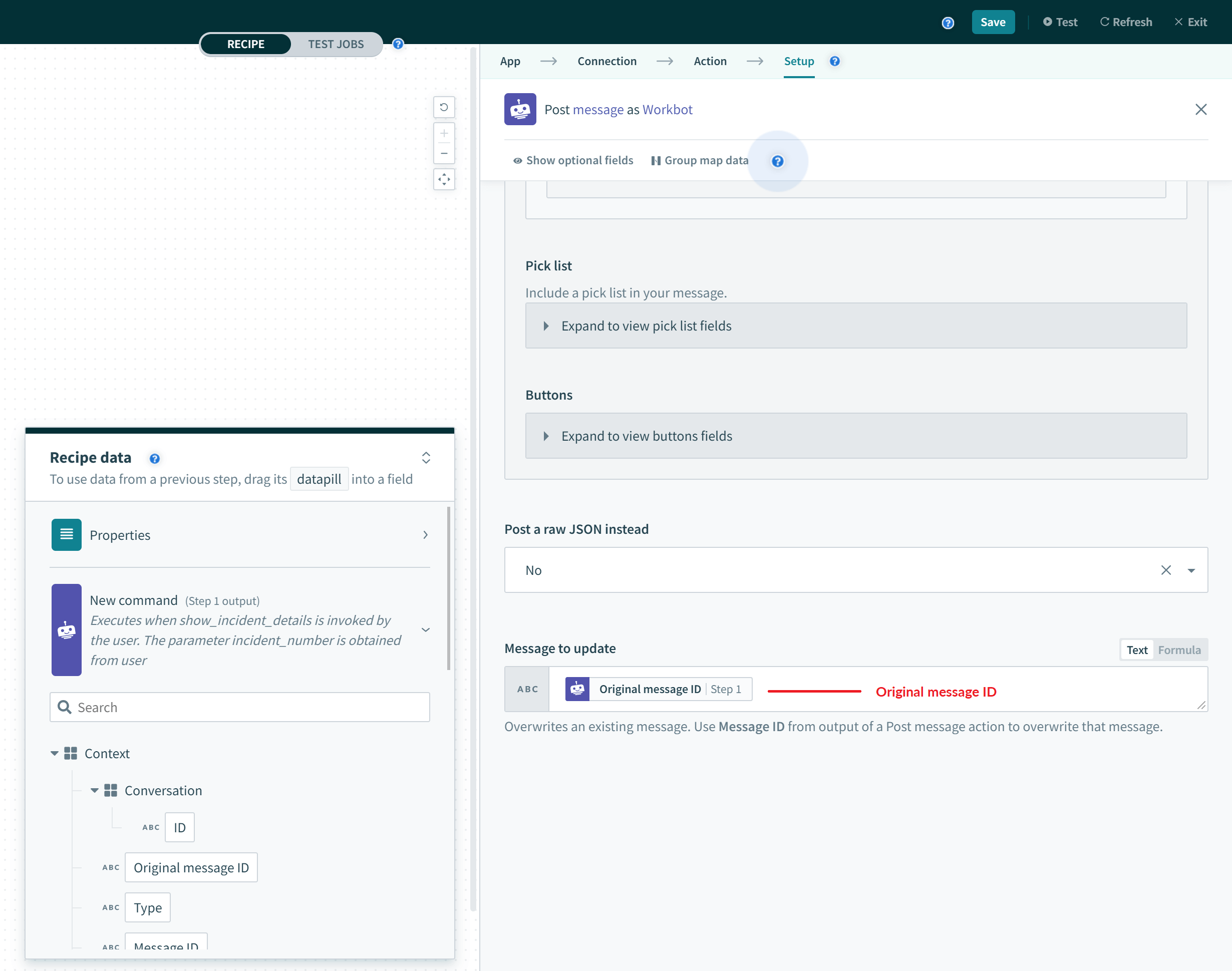 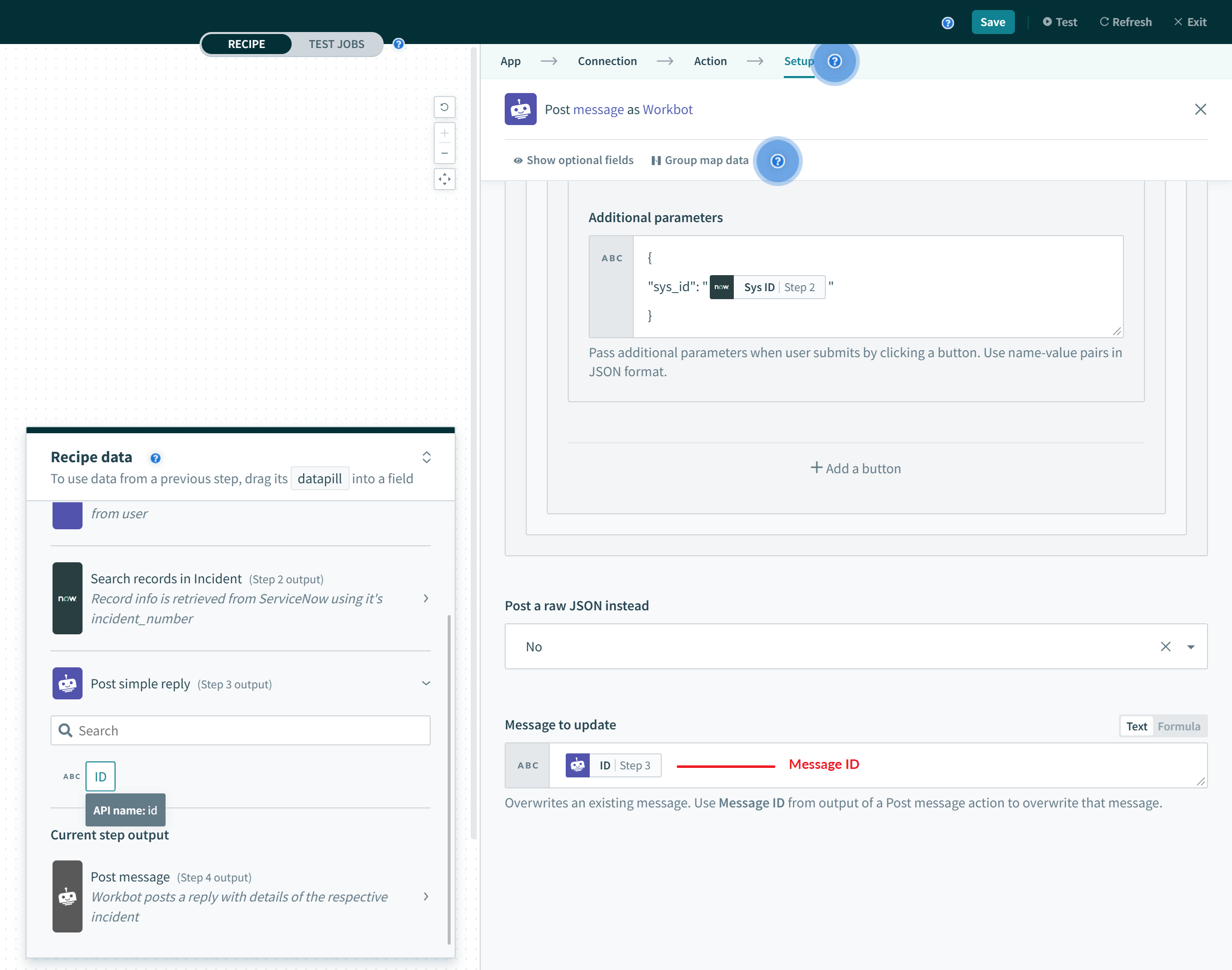 From the fields, select the horizontal ellipsis on the top-right and choose 'Dynamic list'. This should bring up the dynamic list option.

The following table shows what goes into the dynamic buttons fields:

In response to a Tab opened trigger event, you can show a tab using an array of Adaptive Cards. To learn more about how tabs work, see Tabs. 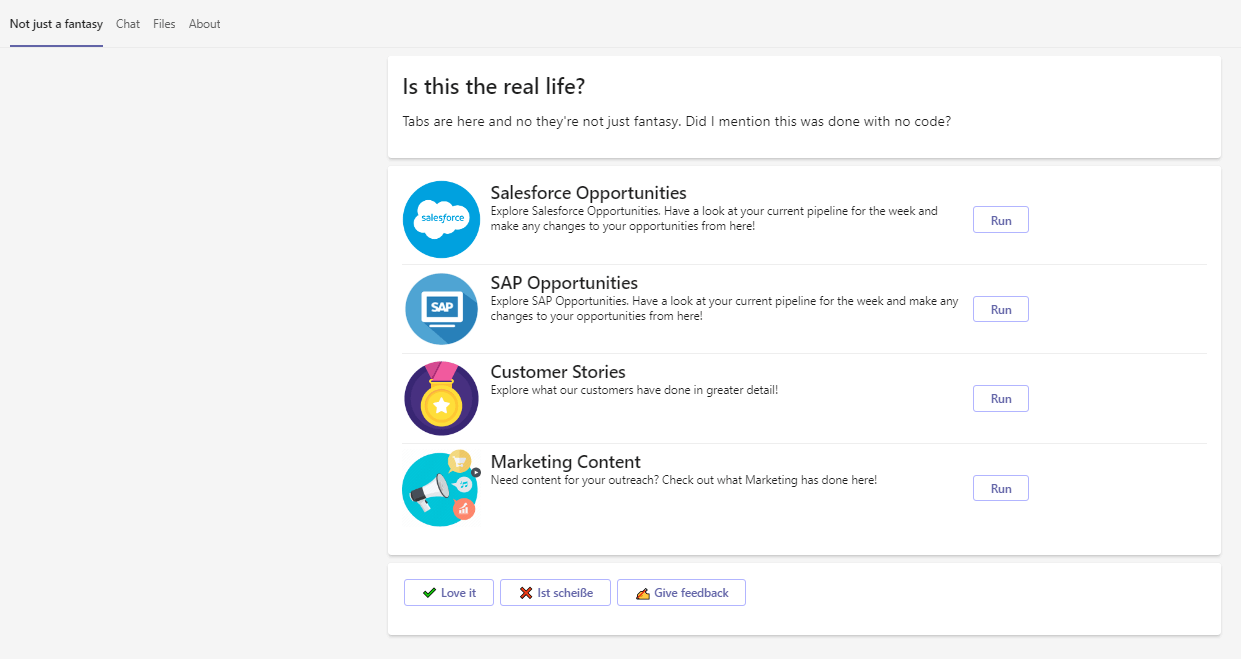